Sadly, we have come to a point that it is no longer surprising when we hear all the havoc about the constant change in climate. It is not that we aren’t concerned but what can an individual do? Yes, making efforts to maintain the balance is what we have been doing, like powering houses with renewable solar panel energy, reducing water waste and replacing the 60-watt bulb into LED light bulbs. These are just small matters we have been taking into our hands for years but if looked into bigger issues that are leading to cause bad effects to the worldâs wildlife, our eyes point to the factories that constantly fumes with toxic gas and chemical wastes into rivers. According to the New York Post, âmore than half of the worldâs forest wildlife could be extinct by the end of the century,â and the increased temperatures are expected to lessen down the rainfall in several places leading the wildlife to suffer. We have faced and still face such global issues that only gets bigger with time but are there factors done to help prevent such global mess? Yes, there are but it is not a one day matter.

Through this blog, we will highlight the major drawbacks and issue we are facing, so let us start with the chart given below that helps understand how the weather is drastically changing around us.

This chart will show you the destruction done by Human 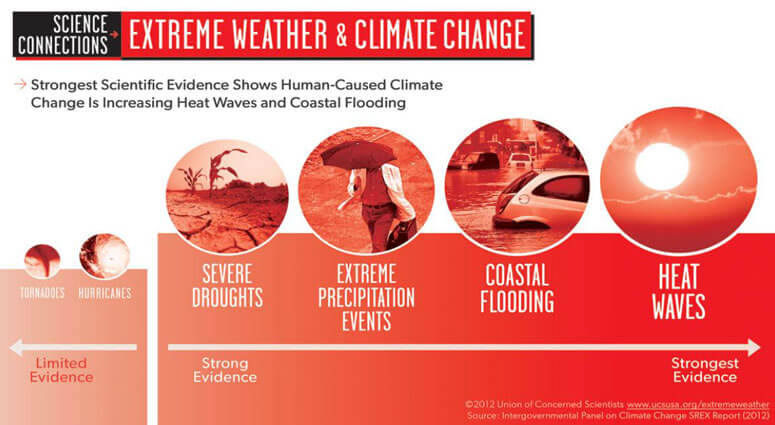 Our Involvement and Misdeeds that has caused Global Warming

Hereâs a thought, we tend to chase away monkeys from our backyard without thinking we build colonies where they once lived, basically, we are to be blamed for interrupting wildlife habitat not them. And the worst part is, we never stop, we keep building modern marvels that lead to destroying the forests. This is one factor that started the global warming, the more we practice on deforestation, by the end of this century, we may not be able to see any naturally grown trees around us, expect artificially made ones perhaps. We are the creators of such destruction that is causing the earth’s crust to move rapidly and also the glaciers to melt. We all know that forest help in balancing the earth by absorbing carbon dioxide (CO2) and release oxygen but unfortunately, forests are constantly being destroyed. According to (WWF) World Wildlife Fund, the US-based scientists came to the conclusion stating that more than 13 percent of global carbon emission comes from deforestation. It is worse than the emissions that are produced from automobile and planes. When we speak of Indian cities, the increase in vehicles like the passenger driven cars and heavy trucks are the main sources that lead to air pollution. The fumes emitting from cars include particulate matter, ozone and smog-forming substances. The health risks are at its peak through air pollution, poor air quality means high chances of life-threatening diseases for humans as well as animals.

Automobiles are one of the leading causes of air pollution, here are the 10 cities with hazardous air pollution in India 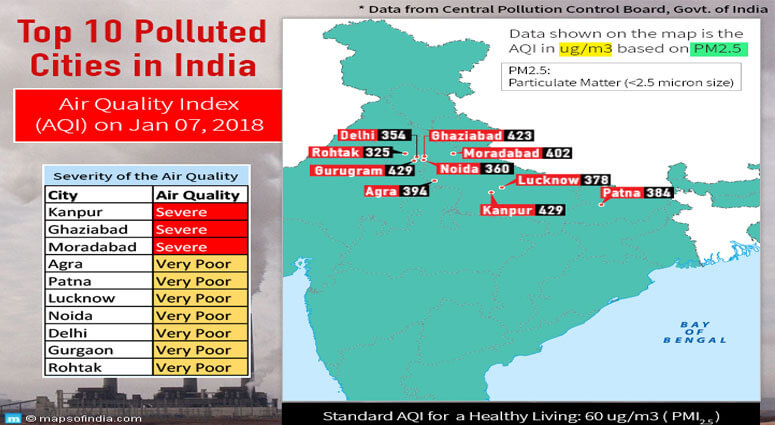 Besides India, the vehicle fumes in the US states in 2013 contributed a hazardous mix of toxins like carbon monoxide, nitrogen oxides, and hydrocarbons into our air. Although greenhouse gases like carbon dioxide exist naturally, the burning of fossil fuels leads to adding more carbon dioxide covering the air with a thick blanket of harmful toxins; the thicker the warmer climate. Such instances also cause destruction to the plants and animals. According to Nikhil Advani of World Wildlife Fund, the hotter days are affecting the wildlife around the world leading to an extended period of drought and intense storms. As per the study published in Climate Change, Wildlife regions like south western Australia, Amazon, Madagascar, Caribbean and Galapagos Islands are on the verge of devastation due to global climate. The reports that are shown in New York Post, around 50 percent of wildlife and 60 percent of plant life in the Amazon are at risk if the global temperatures are raised 3.2 degrees celsius. In such cases, during the increase in temperatures, the rainfall will lessen down in areas like the Mediterranean, Madagascar and Cerrado-Pantanal in Argentina resulting scarcity of water supplies for the African animals. It could also increase the sea level affecting the breeding wildlife grounds of tigers at Sundarbans in India and Bangladesh.

What are the challenges Wildlife face during the Climate Change?

The African elephants require at least 150-300 litres of water per day if the temperature rises elephants need it to soothe their upper body by splashing water. The sea turtles could face challenges finding cleaner breeding grounds and according to the daily mail, one such incident that could heartbreaking even the strongest was when a female turtle was forced to lay eggs surrounded by plastic waste materials on Greta Beach of the Australia territory near Indonesia. The WWF also adds on to say that the African wild dogs are also another easy targets during warmer seasons, they prefer cooler temperatures to hunt. Because of the rise in temperature, the wild dogs could also shrink in animal range and since they live in packs, they are prone to various diseases.

The climate change only worsens to spread wildlife diseases around. However, when we speak of Giant Pandas, they may be able to adapt to the weather but it hampers their sole favourite food, bamboo. Without getting proper nutrition, the already slow breeders that Pandas are, it will affect their development. The global hit on climate change has brought in many challenges for animals. According to National Geographic, âIt’s a tough time to be a polar bear.â These are the highly affected species and is the famous poster animal for global warming. According to a research done by a non-profit organization, Polar Bears International, there are less than 25,000 species of polar bears left in the Arctic and are reducing annually.

Impacts of climate change in Asia and the Pacific 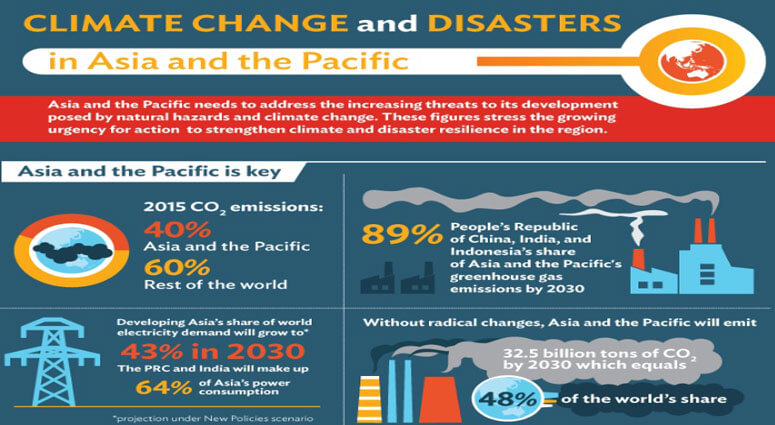 An Urgency to Control the Change in Climate

But What is the Paris Agreement?

Paris Agreement main purpose is to strengthen the climate that has been sinking. Its main goal is to get a global response by joining hands with all international network and governmental bodies to low the toxic emissions. It pledges to keep the average temperature below 3 and 2 degrees C, ideally, aiming 1 degree C.

The climate change is a serious issue and it cannot be avoided, it affects our wildlife and our future generation as well. Due to change in climate, some of the wild species have come close to endangerment. The African elephants that require more than 200 litres of water every day are unable to find any and the polar bears that survive in the ice is already coping with the change, but for how long? Only time will tell. A global issue that causes havoc to our mother earth, the change in climate is a serious matter we all should contribute to saving it which we are by using solar panels and using less water. But there is another way to help global warming by participating in Earth Hour on March 24, 2018. We can witness this historic lights-out social event from 8:30 pm to 9:30 pm local time. Together, we can tackle the change in climate and create a better future where people and nature can thrive together.