This is a side of Narendra Modi which you have never seen before. This time, he will be seen in the famous show Man vs Wild with Bear Grylls. The highly anticipated show will be aired on 12th August on Discovery Channel at 9 PM. The Man vs Wild Narendra Modi episode is sure to get millions across India and the world glued to their television sets. Modi is known for experimenting with different avenues to reach out to the younger generation, and this is a step in that direction. By appearing in this famous show, he has also sought to focus on increasing wildlife tourism in India as well as emphasizing the enormous importance of wildlife conservation.

What can we expect from the Man vs Wild Modi episode?

What we have so far are pictures of Narendra Modi with Bear Grylls along with a teaser video of 45 seconds. In the teaser video released by Discovery Channel, Modi is first introduced as the head of the largest democracy of the world by a voiceover. Then, he is shown welcoming Bear Grylls, sharing a light moment with him, and then heading off into the wild. 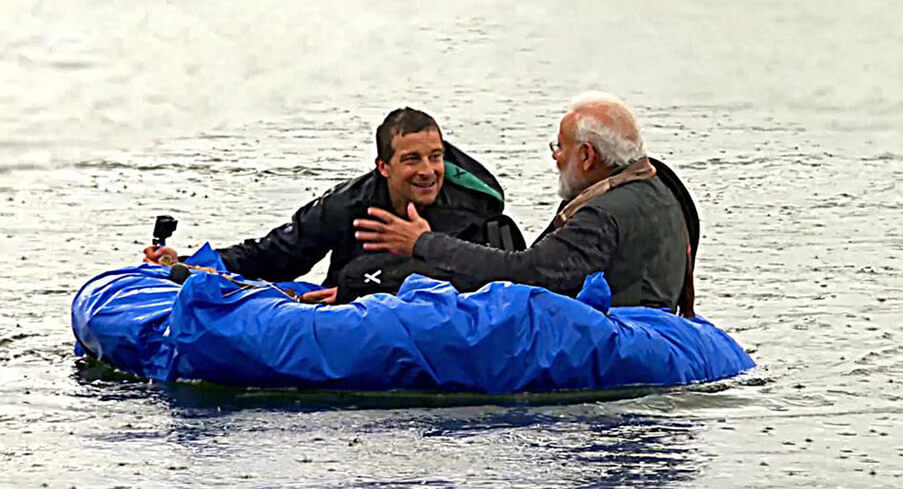 In the next scene, both of them are shown floating on an inflated raft on a river in the Jim Corbett National Park. The video also shows the Indian PM holding a spear (known in the local language as bhaala), walking steadily through the jungle, and Bear Grylls placing a jacket over him. They are also shown sharing a light moment as Modi, holding the spear made from bamboo and other materials collected from the forest, says, âMain aapke liye isko mere paas rakhunga (I will keep this with me to protect you). To this, an amused Grylls replies, âYou are the most important man in India, my job is to keep you aliveâ. 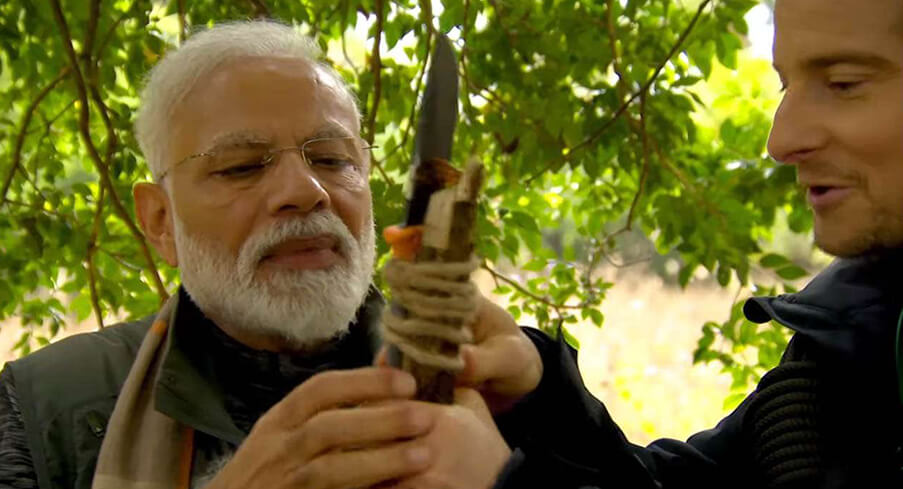 The teaser has certainly left the entire country wanting for more and is currently trending across all social media platforms like Facebook, Twitter, Instagram and Youtube. It is refreshing to see the PM in the role of an adventurer, venturing into the wild with one of the most famous survival experts, Bear Grylls.

Where has the Bear Grylls with Modi episode been filmed? 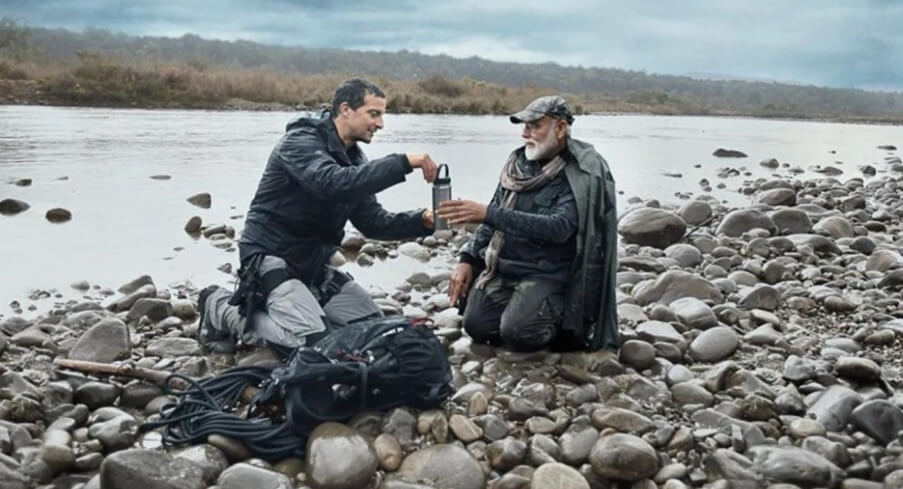 The Man vs Wild Narendra Modi episode has been filmed in Jim Corbett National Park, counted among the most famous national parks in Uttarakhand. The river on which both Bear Grylls and Modi are shown floating on an inflated raft could either be the Ramganga or the Kosi. The wilderness of the park has been beautifully captured in the show.

What message does the PM seek to send through the show? 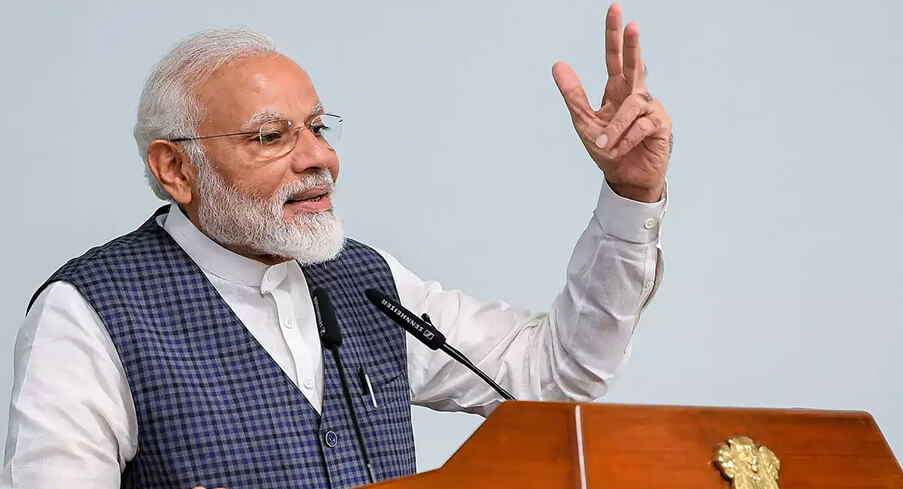 The Prime Minister of India, Narendra Modi, is counted among both the most powerful and popular personalities across the world. In 2018, Forbes magazine counted him among the 10 most powerful people in the world, while Facebook declared him as the most popular leader with 13.7 million likes. It is natural, therefore, that he is an inspiration to people not just in India, but across the world. Anything he says and does, is closely watched and observed by his fans and followers.

By appearing in an extremely famous show with another popular personality and celebrity like Bear Grylls, Modi wants to showcase Indiaâs rich environmental heritage and the importance of seeking harmony with nature. By doing so, he also hopes to contribute to the growth of wildlife tourism in India. 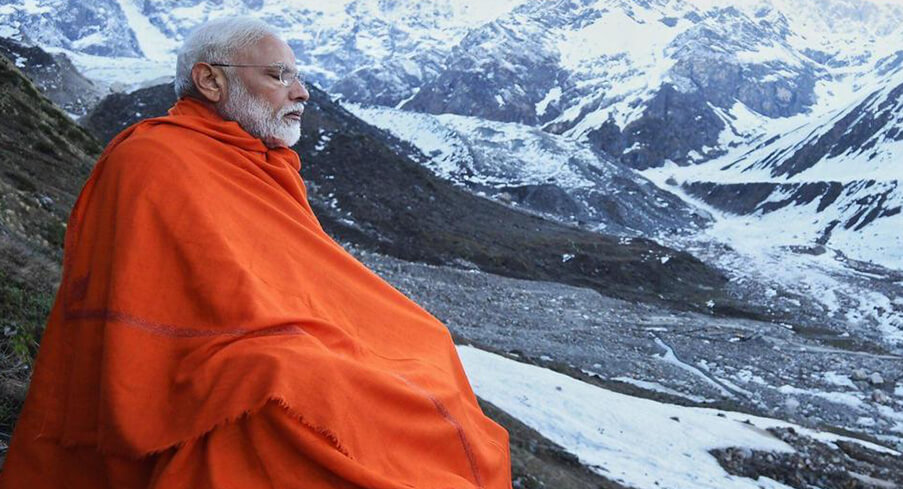 In a statement, Narendra Modi said, âFor years, I have lived among nature, in the mountains and the forests. These years have a lasting impact on my life. So when I was asked about a special programme focussing on life beyond politics and that too in the midst of nature I was both intrigued and inclined to take part in it.â He went on to say, âFor me, this show presents a great opportunity to showcase to the world Indiaâs rich environmental heritage and stress on the importance of environment conservation and living in harmony with nature. It was a great experience spending time in the jungle once again, this time with Bear, who is blessed with indefatigable energy and quest to experience nature at its purestâ.

Global Map to Help Out Conservators Plan a Conservation Framework 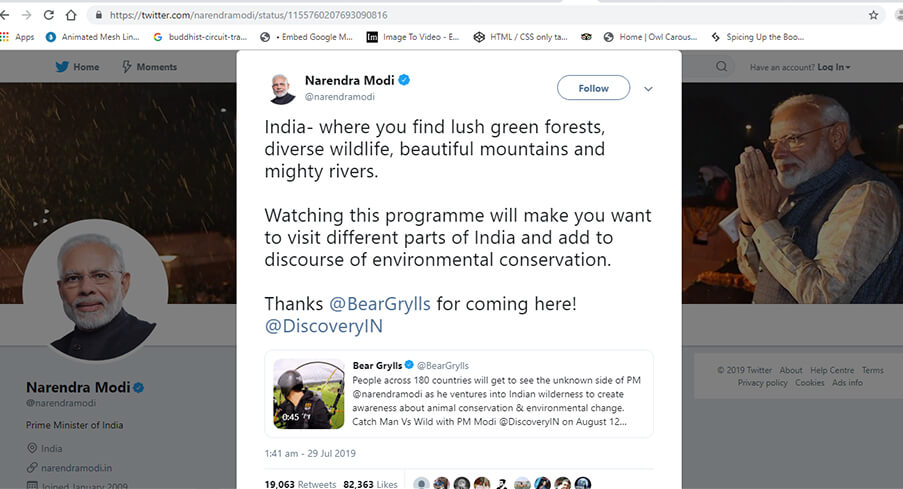 Narendra Modi is also as excited about the Discovery Man vs Wild PM Modi episode as the rest of the nation. He took to Twitter to share his enthusiasm, tweeting that India is a land of âlush green forests, diverse wildlife, beautiful mountains and mighty riversâ. His tweet also expressed the hope that watching the program would encourage viewers to explore the beauty and diversity of India and contribute to the larger cause of environmental conservation in various ways. 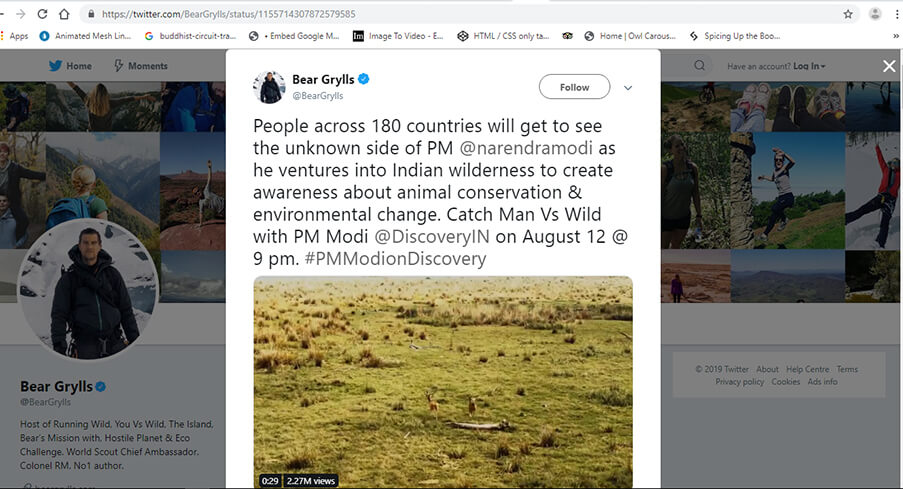 Bear Grylls had a tweet of his own in which he expressed his happiness at the prospect of people across 180 countries seeing an unknown side of Indian Prime Modi as he sought to create awareness about animal conservation and environmental change.

When will the show be aired?

The Man vs Wild with PM Narendra Modi episode will be aired on Discovery Channel on 12th August at 9 PM. Do not miss this opportunity of seeing PM Modi embarking into an adventure with Bear Grylls into the wild.