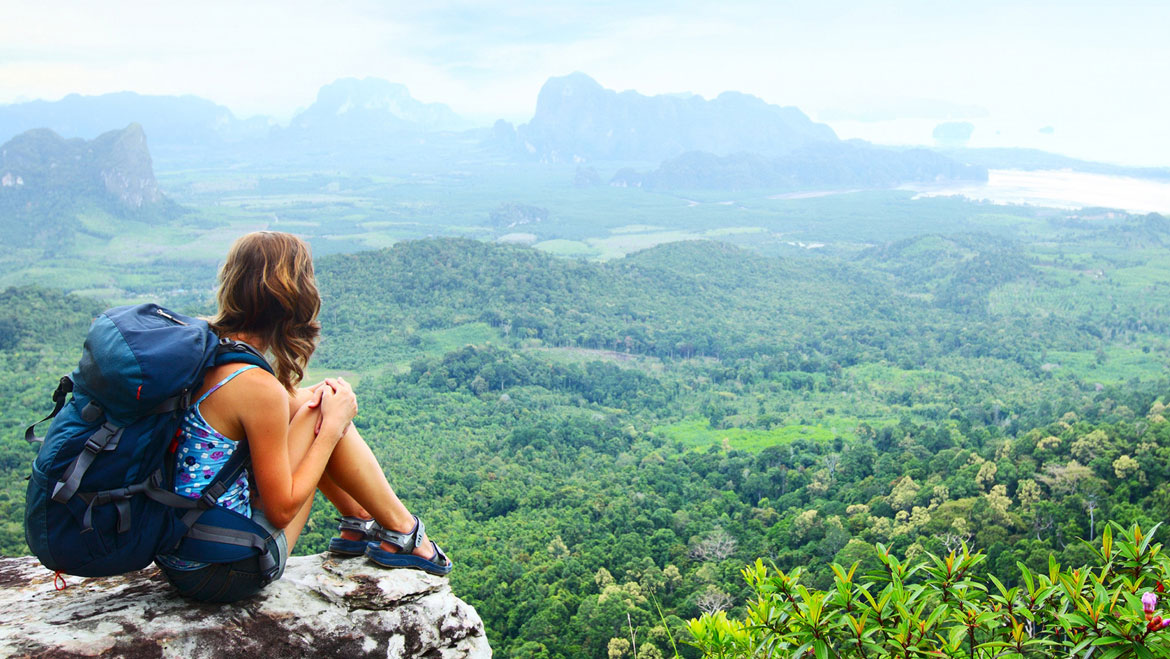 I have been travelling India since my childhood. Still left with a lot. I don’t know whether it is possible to frame each and every corner of India within one lifetime but so far what I have witnessed, I could conclude that you have sort of ways to see India. The places I have explored, culture I have experienced and people I met on my journeys I discovered that one can travel in India in different ways.

Here are a few ways that I have lived on with while travelling from destination to destination in India:

The Indian Himalayan region has always pulled in adventurers from all over the world. From legends to mountaineers of 21st century using skills and techniques to climb several summits have motivated several amateurs to follow their footsteps. I’m not a mountaineer but have met couple of them and heard stories. Peak climbing is now a demanding part of adventure tourism in India. Some of the notable peak climbing tours are Stok Kangri, Kang Yatse and Lungser Kangri in Ladakh; Black Peak, Pangarchula Peak, Rudragaira Peak in Garhwal; and Mt. Ladakhi, Friendship peak and Mt. Deo Tibba in Himachal Pradesh.

You may not be a hardcore adventurer like the mad mountaineers and trekkers; still you want to seek a part of it. Hiking in the Indian Himalayan region and in the Western Ghats gives you to take the pleasure of little bit of adventure and more of nature and leisure. Several easy treks in the Indian Himalayan region that continues for 3 – 4 days like the Bhrigu Lake trek and Beas Kund trek in Himachal Pradesh, Deodital trek and Chopta Valley trek in Uttarakhand and Rhododendron trek in Sikkim are the best picks. From the Western Ghats you have Anamudi peak trek and Mathikettan Shola Rain Forest Trek. Further, hiking may also last for few hours and there are plenty of opportunities in India to seek such pleasure.

4. As a Rider – Mountain biking and cycling

Now that’s different way to explore India. If you are fit enough to propel with paddles then go for mountain biking and cycling in Ladakh and snake through some of the high altitude mountain passes. Further, the thrilling ride of 470 kilometers (approx) from Manali to Leh and Srinagar to Leh, which is approximately 420 kilometers are the best options for experienced riders. For beginners to paddle little bit as a rider you have easy mountain biking and cycling opportunities in Manali, Madh in Maharshtra, Arekere in Karnataka and Kadach in Gujarat.

To seek the world beneath your feet you need dig deep into the mystic mountains of Meghalaya. The Khasi, Garo and Jaintia hills hold several natural caves that offer you to seek the thrill of spelunking (caving) in India.

7. As a Wildlife Enthusiast

I am also confused where to take you as a naturalist. Hawww!!! India is actually a home to nature lovers. But if you ask me to pick the best out from the diverse nature then I will recommend you to drive to hill stations in India like Gulmarg and Pahalgam in Kashmir, Manali and Kasol in Himachal Pradesh, Lansdowne, Ranikhet and Kausani in Uttarakhand and Pelling and Yuksom in Sikkim. Some other hill stations in India like Shillong, Ooty and Araku Valley also offers you immense scope of refreshing nature. On the other hand, Coorg and Munnar housing variety of spice orchards are my favorite nature hubs. Lastly, Alleppey gives you to explore the backwaters of Kerala, Darjeeling allows you to walk through the aromatic tea gardens and Goa offers the coastal colours and bright blue sea.

Explore the vivid colours of the Indian Himalayan region, variety of spice gardens and coffee plantation in the Western Ghats and tea orchards of Darjeeling and Nilgiri. Dotted with more than 500 species of flowers, Valley of Flowers in the Garhwal Himalayan region is a paradise for botanists. On the other hand, the Sham Valley trek in Ladakh allows you seek the beauty of rare apricot flowers and the Rhododendron trek in Sikkim offers you explore the vast ecosphere of Sikkim. Coorg, Munnar, Ooty, Connoor and Wayanad are ideal havens for botanists.

Houseboat Cruise on the backwaters of Alleppey

When it comes to cruises in India, I will first go for the backwater cruise in Alleppey. Thereafter, you have opportunity of ocean cruises like Kolkata to Port Blair and Chennai to Port Blair that will voyage to the archipelagos of Andaman and Nicobar over the Bay of Bengal. From Cochin to Lakshadweep islands and Goa to Mumbai allows you to seek the blues of Arabian Sea.

11. As a Polyglot Traveller

Language… that is one of the features what differentiate the people of India. Walk 10 miles and you will come across another new language. On the other hand the rural picture is bit different. They acquit themselves with their own dignity and further, the tribes hold an indigenous colour of India. India brings forth more than 500 different languages including 22 national languages. Well the easiest way to witness this language clamour is from the local newspapers. The nation is circulated by newspapers (local and national) of more than 100 different Indian languages.

12. As a Cultural Enthusiast

The vibrant Indian culture is another major tourist attraction. It is another feature to differentiate the people of India. Other than national festivals like Diwali, Ganesh Chaturthi, Durga Puja, Holi, Id and Baisakhi… regional festivals like Jaisalmer Desert Festival, Khajuraho Dance Festival, Ambubachi Mela in Assam, Hornbill Festival in Nagaland and Onam in Kerala displays a rich cultural clamour. Experience the variety of dance performances, music and art works as a cultural enthusiast.

Prayer at Jama Masjid during Eid

Religion is another way to differentiate the people of India. Several pilgrimage tours in India like Char Dham Yatra, Amarnath Yatra, Nanda Devi Raj Yatra and Rath Yatra allows you to explore the religious diversity as a pilgrim. Nonetheless, Golden Temple in Amritsar, Sai Baba Temple in Shirdi, Mata Vaishno Devi in Katra, Tirupati Temple, Dakhineshwar Temple in Kolkata, Jama Masjid in Old Delhi, Basilica of Bom Jesus in Goa, Ranakpur Temple of Jainism in Rajasthan and Lamayuru and Alchi Monastery of the Indo – Tibetans in Ladakh are the popular pilgrimage hubs differentiating the religions in India. Places like Ajmer, Rameshwaram, Dwarka, Varanasi, Haridwar, Nasik and Vrindavan are also popular pilgrimage hubs.

14. As a Heritage Enthusiast

With a vast history, India is dotted with several forts, palaces, monuments and temples that display the rich historical diorama. Further, the UNSECO World Heritage sites like Taj Mahal in Agra, Ajanta and Ellora in Maharashtra, Hampi and Badami in Karnataka, Khajuraho Temple complex in Madhya Pradesh, Konark Sun Temple in Orissa, Qutub Minar in New Delhi pulls in travellers from different parts of the world. As a heritage enthusiast you may also seek to drive through the unexplored heritage sites of India that include Terracotta temples of Bishnupur in West Bengal, Domkhar in Ladakh and Unakoti Hills in Tripura.

Being in the midst of several people belonging from different culture… as a food lover you will love to stay back in India or you will fly back carrying variety of spicy recipes. The Indian menu consists of both non – veg and veg. What differs Indian food from rest of the world is use of variety of spices and mouthful preparations. Whether savouring fish curries from Kolkata OR dal bati churma from Jaipur and slurping momos from Ladakh OR dosa from Kerala… you have countless dishes to BURP.

Wherever you travel in India carry your camera. Each and every turn there are surprises that you will love to frame it. It depends how you see it. The diverse nature of India pulls in several photographers. Other than that… the rural picture of India is a major photography attraction.

A honeymoon couple in Jaisalmer, Rajasthan

Well… if you are for honeymoon in India then seek to travel India leisurely and luxuriously. You have places like Udaipur and Jaisalmer in Rajasthan; Srinagar in Kashmir; Munnar and Alleppey in Kerala; Ooty in Tamil Nadu; Gangtok in Sikkim; Manali and Shimla in Himachal Pradesh; and Mussoorie and Nainital in Uttarakhand AND last but not the least GOA.

After the hustle and bustle of a week you often seek for a weekend break. From Kolkata you have a pleasure drive to Mandarmoni, Digha and Sankarpur; from New Delhi you can wheel to Agra, Jaipur, Ranthambore National Park, Corbett National Park and hill stations like Dharamshala, Kasol, Kausani, Lansdowne, Rishikesh and Nainital; from Bangalore drive to Mysore, Coorg, Bandipur National Park and Ooty; and from Mumbai drive to Khandala, Lonavala and Mahabaleshwar.

A private beach in Goa

You wanna be naughty at any age? Go Goa and refill all your thirst. Be a boozer, baywatcher, surfer and party lover… Goa is the ultimate hub for hippies as well as for travellers. Explore the pristine beaches and chance upon a bikini stunt. Nonetheless… have a rejuvenating holiday resort in Goa and enjoy a soothing spa and ayurvedic massage.

Just remember to carry your notebook or diary where ever you travel in India. I bet you will end up as a travel writer… penning memories captured.