Less Focused Endangered Species of India and Where to Find Them?

The Endangered Species of India: Look Beyond Rhinos, Tigers and Elephants

It is true that most beloved animals of India like One-Horned Rhinoceros, Bengal Tiger, and Asian Elephants are under constant threat and often surface in the news. And there are many animal rescue operations and centers built for them. But let us not ignore the remaining >species that come under endangered class, especially Pangolin. With multiple poaching cases in India, deforestation issues and other man-made structures that create havoc in the wild, today there are a number of animals that sit on the borders of extinction. And if conservation is not taken seriously, even a few surviving onesâs may not be there for the future generation to see. But on a positive note, India has a number of wildlife sanctuaries to visit that conserves the wild, for instance, there is a sanctuary dedicated to Asiatic Lions in Gujarat and Dolphin Sanctuary in Bihar. As you continue reading this blog, youâll come across the list of a number of critically endangered animals that need attention before they completely disappear.

Kashmiri Red Stag and where can we find them? 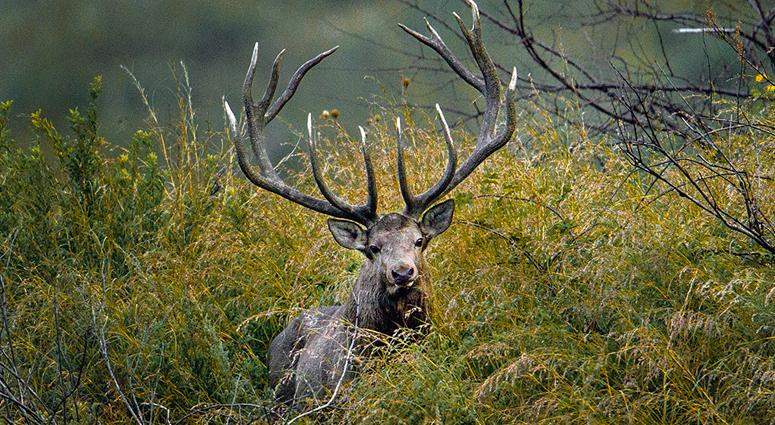 The already beautiful destination of Kashmir is even more radiant when the comely Red Stags /Hangul linger around the valley. This charming species I wish to see dwells in the colder regions and, thus, can only be found in the northern parts of Kashmir and in Himachal Pradesh. Perhaps it being the state animal of Jammu and Kashmir, efforts were made by the state government to protect the animal, and it gradually increased to about 300 plus than the normal. However, it still fluctuates up and down between being critically endangered or endangered animals in India. If you wish to witness this giant antler animal that consists of 5 tines, visit Dachigam National Park, 22 kilometers from Srinagar and the Chamba Valley of Himachal Pradesh. 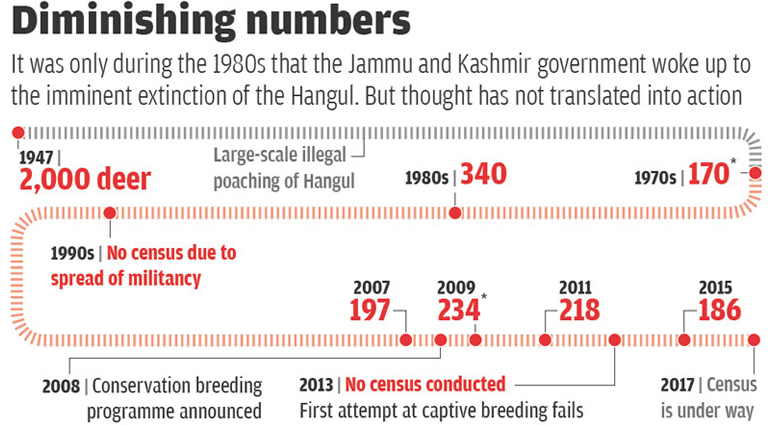 Pangolin and where can we find them? 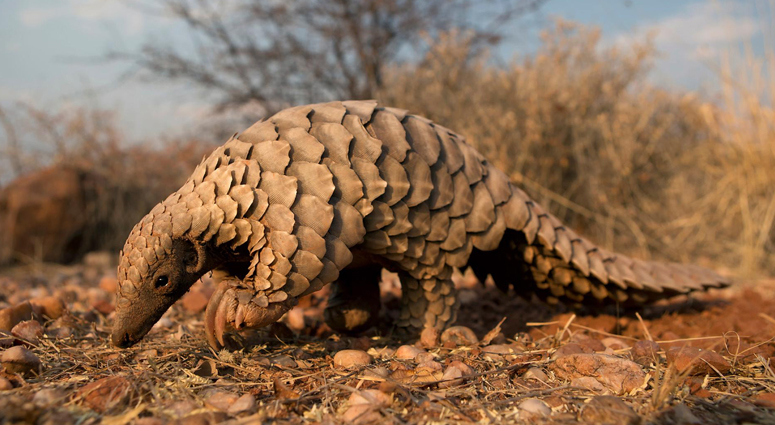 To what started as being an endangered animal to now in a critical stage, meet the world’s most hunted animal, Pangolin that will soon be completely extinct if we do not take care of it. This anteater is a famous animal for being the only burrowing mammal to be covered entirely in scales. And perhaps, it is the sole reason that attracts poachers to which they can sell and fetch up to 2 lakhs per kilogram in black markets. Pangolin is mostly found throughout the foothills of the Himalayas and in the Indian plains.

It is not only in India, but Pangolinâs are killed worldwide, check the given graph below: 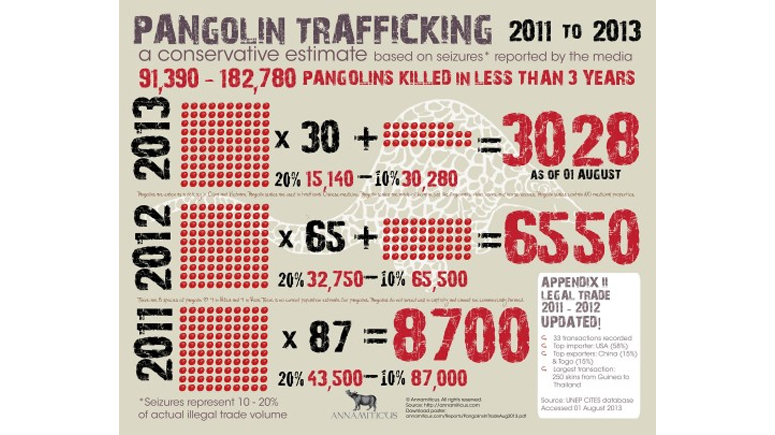 Here is a video by Nat Geo Wild about the World’s Weirdest: Pangolin

Asiatic Lion and where can we find them? 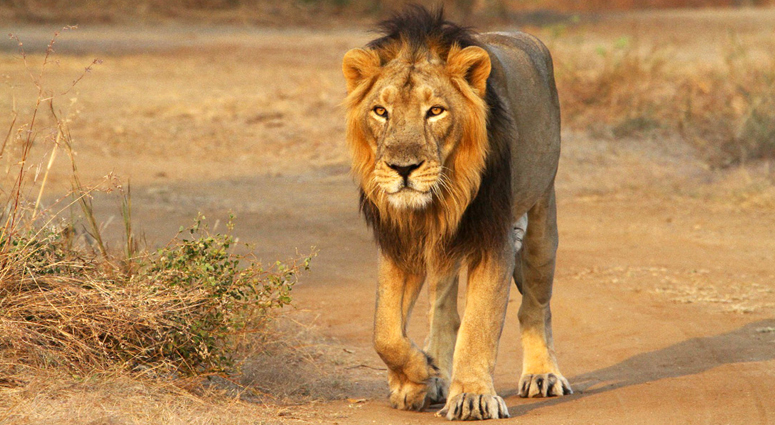 The Asiatic Lions also cry for attention, but of course, it is less triggered to the conservationists as compared to the Bengal Tigers, One-Horned Rhinos and Asian Elephants. This subspecies of Lion is more comfortable in the semi-deciduous environment and that is why the only place in the world you are to find Asiatic Lions in India is in Gujaratâs Gir National Park and Sanctuary which is covered with dry-deciduous forest. If you plan to take a jungle safari in Gir to see the lions, make sure to notice their legs, they walk on their tiptoes, like literally (laugh). In Gujaratâs National Park alone, the lion population is 400 plus and it is gradually increasing by taking conservation measures by the state government. But one fact that makes Asiatic Lion different from their cousins, the African lions is that Asiatic Lions have longitudinal prominent belly folds.

The population of Asiatic Lions in Gir National Park 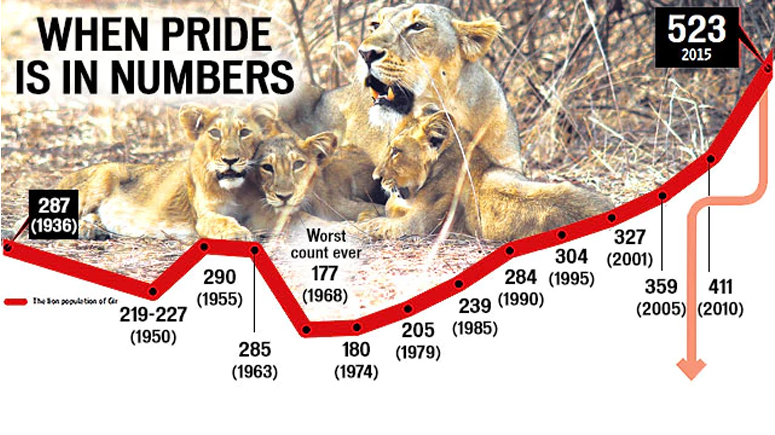 Lion-Tailed Macaque and where can we find them? 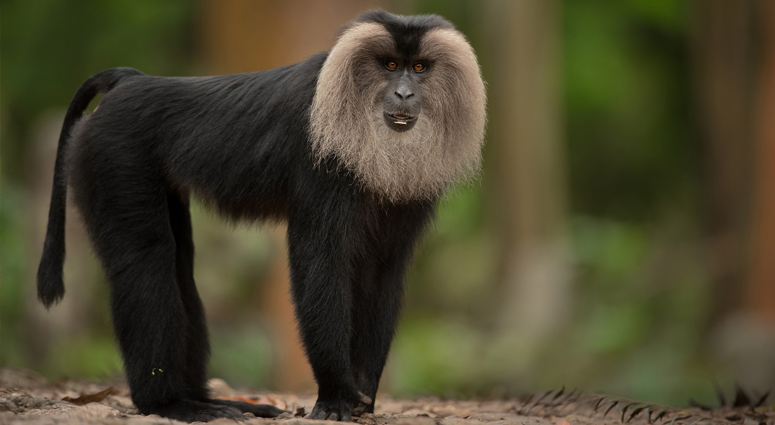 The rarest of all primate species in India, the Lion-Tailed Macaque is unique in its fullest form, why so, let me explain. Its silver-grey hair covering the entire head to chin almost makes it look like a lion, that densely black body and a long tail with a tufted fur end concludes the entire look, I hope the uniqueness is rightly explained. This endangered primate lives on the lush rainforest of the Western Ghats in the southwestern parts of India like Kalakkadu Hills and the Anaimalai Hills of Tamil Nadu and Sirsi-Honnavara rainforests of Karnataka. According to a study, it states that more than a thousand adult Lion-Tailed Macaques live in the forest of Kerala. And to see the arboreal beings make sure to visit the Nelliyampathy Village in Kerala and the Indira Gandhi National Park in Tamil Nadu. 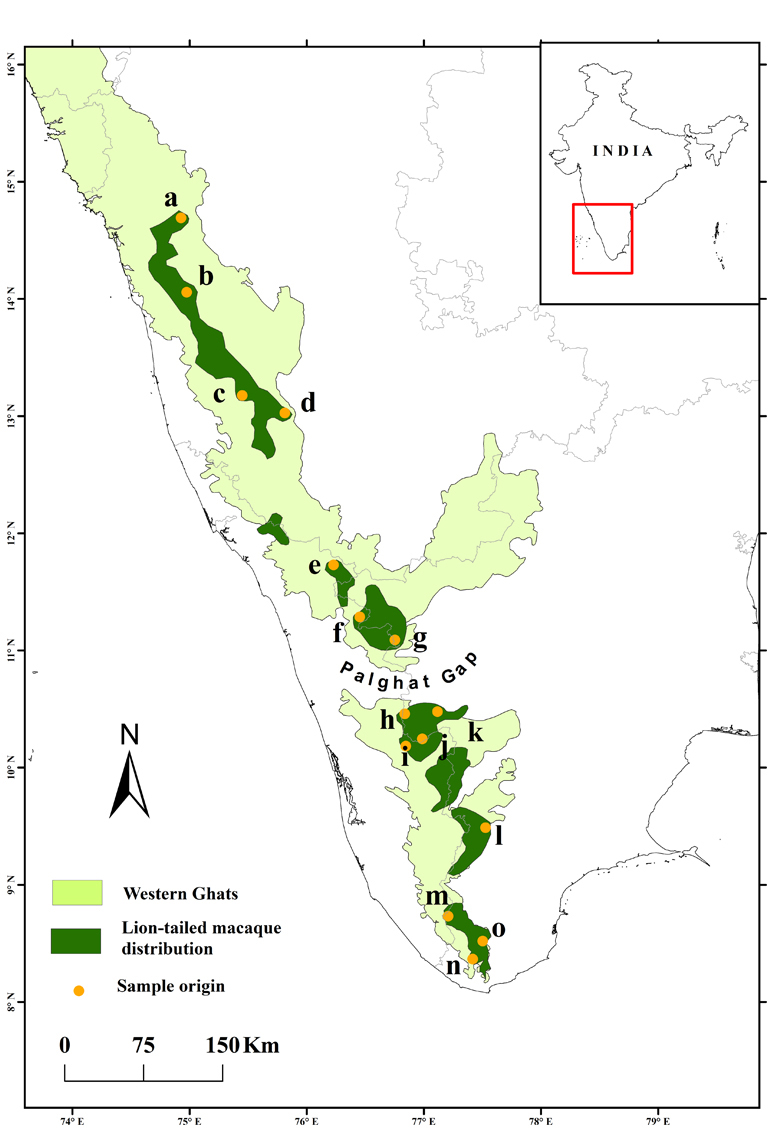 Gangetic Dolphin and where can we find them? 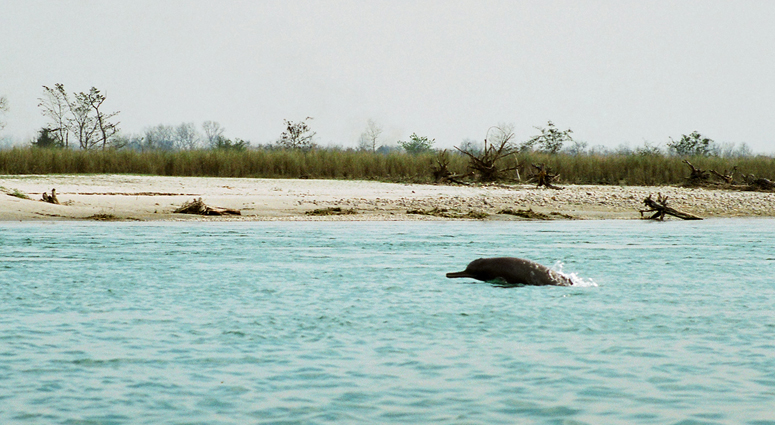 Raise your hand if you wish to swim with Dolphins because I sure am, but if you wonder where can I find them, well, itâs not in the ocean but the two rivers of India, Ganges, and Brahmaputra. India is known to have freshwater Dolphins that enjoy swimming sideways at rapid speed and playing near the river confluences but sadly, they are essentially blind. These aquatic animals are also recognized as the National Aquatic Animal of India and are taking great actions to keep them safe from extinction because we only have one beautiful aquatic species. It is said that most of the river Dolphins are observed in the river of the Ganges between Manihari Ghat and Buxar. But if you are wondering the perfect location to witness this aquatic animal, visit the Vikramshila Gangetic Dolphin Sanctuary in Bihar.

Check out the common threats of Gangetic Dolphin in India:

Red Panda and where can we find them? 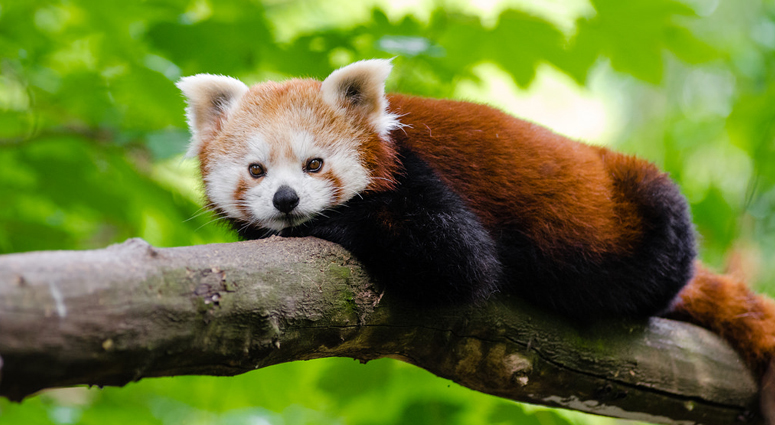 Youâve got it all wrong till today, the Red Pandas are not the relatives of the Giant Pandas, they have their own phylogenetic family, but why share the same name right? Seems the naturalist Thomas Hardwicke was too late to submit his paper else weâd know Red Pandas as Wha. Kinda odd isn’t, thank you Frederic Cuvier (zoologist) for giving a cuter name. Besides, all the fuss about naming the animal, the Red Panda is not far behind to top the list being the cutest animal alive. These adorable creatures have a sweet tooth for fake sugar, and it uses its furry tail as a blanket to protect from cold mountain air, aww! And like me, if you are interested to see the Red Pandas, visit the wildlife zoos in the Himalayan destinations of Darjeeling, Sikkim and the Northeast states of Meghalaya, Arunachal Pradesh.

Sangai and where can we find them? 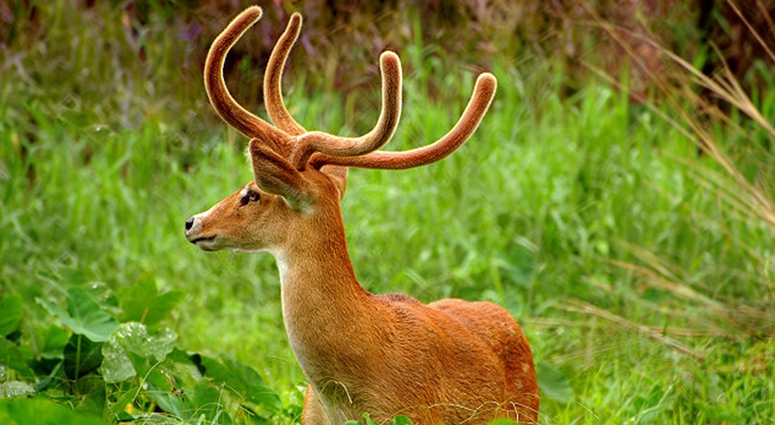 I guess calling Sangai as a Dancing Deer which also happens to be its other name makes the appearance look more justified, what do you think? Its tall elegant posture and distinctive antlers make it to be one of the rarest species found only in the Northeast destination of India. And it is also the state animal of Manipur that perfectly compliments the states enthrall beauty. This animal prefers staying in the marshy land atop floating phumdis in the UNESCO World Heritage Site in Manipur at the Loktak Lake in Keibul Lamjao National Park. You can find Sangai by taking a morning boat ride along the labyrinthine lake routes and experience both the exquisiteness of the destination and the endangered state animal.

The Nilgiri Tahr and where can we find them?

An endangered species with a stylish backward curving horn is the Nilgiri Tahr also known as an Ibex. This state animal of Tamil Nadu prefers living under montane forest that is found in the southern parts of the Western Ghats in India. Being mountain goats, they are expert in climbing the rocky cliffs and are often seen roaming around the verdant woodlands of Munnar. But in particular, the most preferred place to see this species is at the Eravikulam National Park in the Nilgiri Hills of Kerala and Periyar National Park located in Kerala as well.

Dhole and where can we find them? 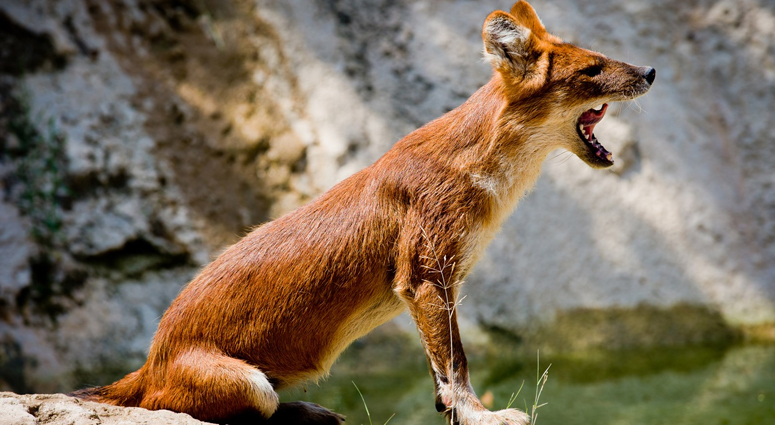 Indian wild dog, Dhole are often seen in large groups and are known for their pack hunting skills. These mammal species are carnivores and often target smaller species of wild boars, birds, lizards, frogs, deer, goats and wild cattle. Dhole is also known as whistling dogs because they make high pitched yelps and loud cries. You can catch a glimpse of these species in the northwestern and central wildlife destinations like Kanha National Park, Corbett National Park and Chitwan National Park.

Mishmi Takin and where can we find them? 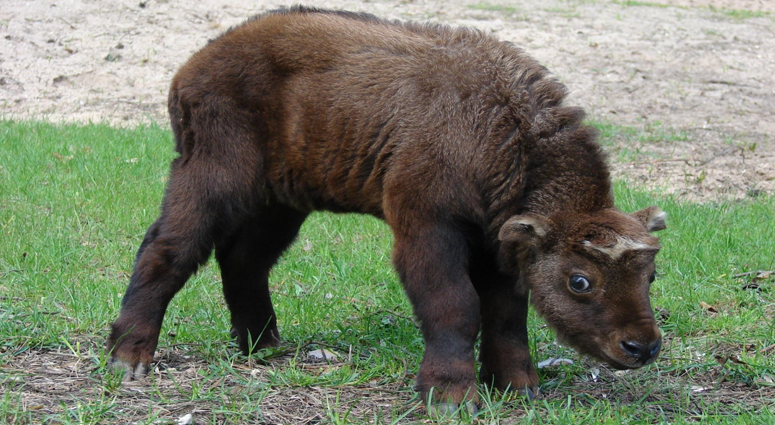 With horns like from the Disney animated movie, âThe beauty and the Beastâ this subspecies of Takin, Mishmi Takin is a goat-antelope often targeted by the poachers for its skin. Mishmi Takin is well adapted to live under the bitter cold weather and, thus, can only be found on the high mountain destinations of India. Like any goats, Mishmi Takin too has a split hoof that helps the animal climb steep rocky hills. You can catch a glimpse of this unique endangered animal in the Northeast destination of Arunachal Pradesh in Dibang Wildlife Sanctuary.

When does the Conservation of Animals take place and how can we prevent the animals from being endangered to critical?

There is often a cry for safeguarding the endangered animals not just in India but worldwide, although many efforts are being laid-down to conserve the wildlife and its habitat, how far can one go. The responsibility to protect the animals does not only depend on the forest officials, the governments or the NGOs for that matter, it also starts with you and me. As an individual, we cannot make a huge difference but by organizing events to bring awareness or marching for the voiceless may be of some help. The question, when does the conservation of animals take place is when we stand against unhindered poaching, man-made problems that create havoc in the wild and most importantly deforestation. And perhaps through actions taken against these factors, we will help reduce the barbaric acts against innocent wildlife in India and the world.

Animals in India that are protected yet exposed to danger 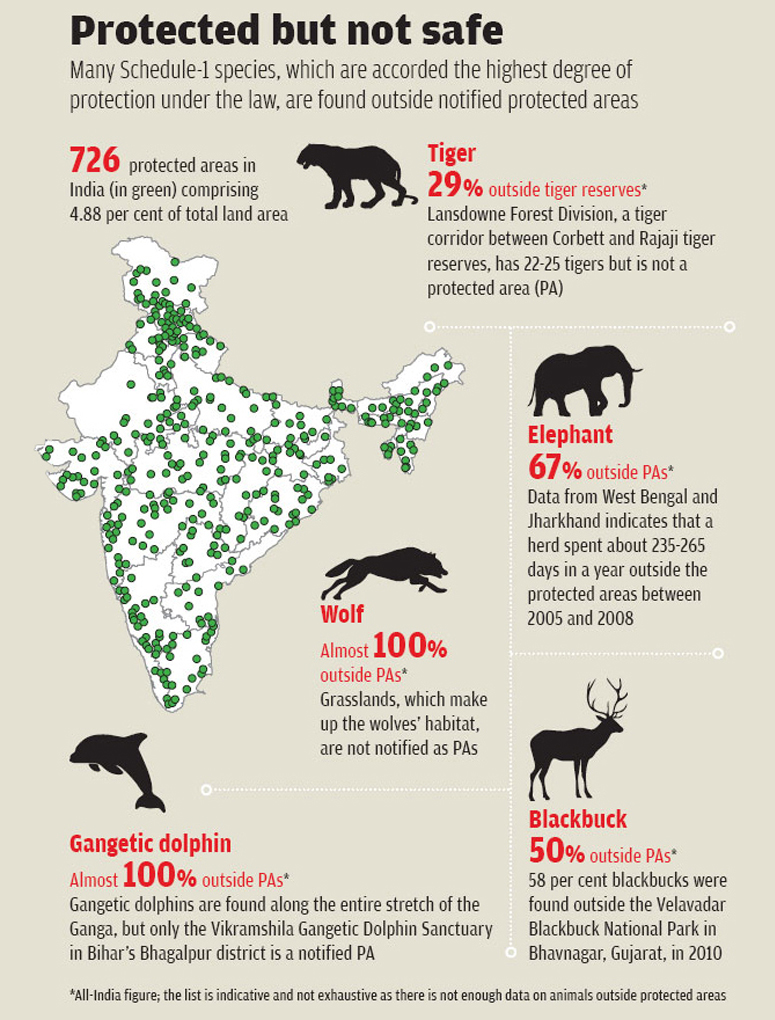 After much research, there are 10 animal species in India that are endangered with just one on the verge of complete extinction. But then again, I have come across many that are slowly leading towards being endangered and before a new animal species come under that infamous category, let us help prevent killing and poaching of animals. You can visit the popular national parks in India or rescue centers and volunteer for a day or simply adore the animals. Truth be told, from all hazardous things that are happening like poaching and killing, we never know for how long these animals would exist with us.