With its stunning assortment of sculptures, edifices, artefacts and images Sarnath Museum is reckoned to be one of the best places to visit in Sarnath for people of all ages. Situated at a strategic location which is surrounded by luxuriant setting, it is an archaeological museum founded in 1910 which houses a rare collection of the findings that were recovered from the excavation at various archaeological sites of Sarnath. The excavations at these sites were carried out by the Archaeological Survey of India (ASI). At this popular museum in Sarnath, tourists can expect to see some remarkable collection of Buddhist art, sculpture, and antiquities that together make Sarnath Museum a must-visit place. At present, the museum includes more than 6800 artefacts and sculptures that are centuries old. In total, the museum houses five galleries that display a rich collection of antiquities dating back to 3rd century BCE to 12th century AD. Along with that, there are two verandas that also displays a rare assortment of artefacts and antiquities.

On display, the museum also has various edifices which include Buddha and Bodhisattva images along with various other ancient remains. Among those sculptures, one famous one is the 5th-century Lord Buddha, who is sitting in meditation posture. Giving a treat to the eyes of all the art lovers are the specimens of Buddhist arts that are put up on display at this popular museum. Besides, this famous tourist attraction in Sarnath is also known to house a section which boasts a rare collection of sculptures and figures from Gupta, Kushana and Mauryan period. The section includes various images of Lord Buddha along with Hindu deities that were found at Sarnath. These images date back to 9th to 12th centuries. Above all that, what catches the eyes of tourists the most is the sculpted Lion Capital of the great Mauryan emperor, Ashoka. Built of sandstone, this well-preserved Ashoka Pillar traces its history back to 250 BCE. On a whole, the museum is one of those tourist sites in Sarnath that are perfect for a day outing with friends and family and also to impart yourself with some historical knowledge.

The step to construct the museum was taken by the government in 1905 to keep the excavated antiquities. However, the museum is the result of all the effort of the Director General of Archaeological in India of that time, Sir John Marshall. All the plans of the museum were drafted by the then consulting architect of the government of India, James Ramson. Later in the year 1910, the museum was established to display, house and also to study the excavated artefacts and antiquities. 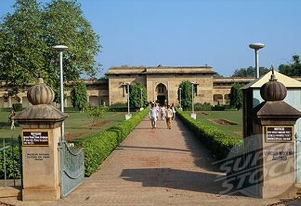 Sarnath Museum remains open all days except friday from 9 in the morning to 5 in the evening.

The entry fee to Sarnath Museum differs for both Indian and foreign tourists.
For Indians:

Top Things to Do & See on Your Trip to Uttar Pradesh

Find the relevant information on how to plan hassle free trip to Uttar Pradesh. We have put together the best travel guide which include details on how to reach Uttar Pradesh by different means of transport along with authentic information on various trains, flights and buses. Find details on best time to visit Uttar Pradesh with average temperature in different seasons. Also explore the best places to visit for cultural tour, heritage attractions or sightseeing tour in the state with the help of the map made easy for you to navigate.