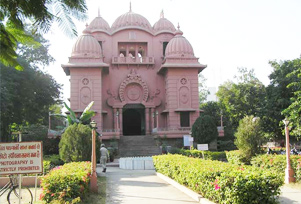 Built in the 19th century with a purpose to evoke Vedic philosophy and principles among the people of India, Ramakrishna Math (Ashrama) is an important learn centre of Rajkot. This serene campus offers Vedic education, also has a library, ayurvedic centre, bookstore, guest house and a permanent exhibition showcasing the life of Shri Ramakrishna Paramhans.

Ramakrishna Math campus is majestic, from the entry gate to temples to fences; each and every wall is adorned with an emblem of Ramakrishna Math and Mission, which was designed by the Swami Vivekananda showing four forms of yoga. Also at the each panel, one will notice a temple motif in which Kumbha, Conch, Deepa, and Bell are placed so well that all four visible from every corner. One thing which is worth noticeable in the campus its architecture, which inspired by the different notable building of India like the main gate is modified version of Ajanta caves entrance, Chaitya of Karli Caves in Naat Mandir and Rajputana style chhatris of Gopurams.

Amidst the Ramakrishna Math complex nestles the 168 feet high temple featuring an auditorium under the Natmandir and Bhoga room under the Garbha Mandir. The temple has been designed by Shri Madhukar Thakor on the lines of the Shri Ramakrishna Temple at Belur Math, which was originally conceived by Swami Vivekananda. A beautiful railing surrounds the temple looks exactly like the massive stone fences of the Sanchi stupa. Idol of Lord Hanuman to the left and Lord Ganesh on the right are installed inside the temple. Overlooking the Naat Mandir is a Gopuram, which is covered with an overhanging balcony and then further up is a Nahbat-Khana, the traditional place from where the Shehnai is played during festival days. Adorned with domes, chhatris, parapets and windows, the exteriors of the temple are as impressive as its interior.

Other Attractions in Rajkot