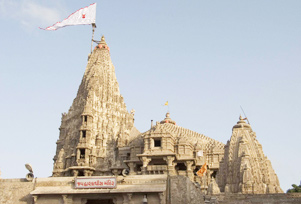 One of the most visited Hindu pilgrimage temples in India, Dwarkadheesh Jagat Mandir, is considered as one of the four Dham (divine abodes) in India.' The literal of Dwarka signifies 'Gate to Liberation'- 'Dwara' meaning door and 'ka' implying eternal happiness. The penetrated Dwarkadheesh temple nestles between the ocean coast and the town of Dwarka.

Mythology Mythology and significance of Jagat Mandir is sacred to Lord Krishna, who is the eighth incarnation of Lord Vishnu. Legend has it that Lord Krishna shifted his capital from Mathura to Dwarka because 9KamsaJarasandha, who wanted to avenge the death of his son in law (Kamsa), repeatedly attacked Mathura. During the 18th attempt by Jarasandha, Krishna chose to leave Mathura with the Yadav dynasty. Dwarka, as a site for the capital, was chosen by Garuda, the divine eagle, to bring Krishna when he departed from Mathura. Krishna then besieged Vishvakarma to help him build his new capital. Vishvakarma agreed to help only on one condition that Samudradev, the god of the sea, should provide the land. Krishna then offered prayers to Samudradev and was blessed with a land that measures 12 yojanas (773 sq km). He then founded his kingdom in Dwarka and stayed there for the rest of his life.

Architecture: As per the mythology facts, the original Jagat Mandir dedicated to Ranchhodraiji was constructed by the great grandson of Lord Krishna, Vajranabhji. Later, it was reconstructed several times following deluges and attacks by invaders. The present structure of the temple was constructed in the 15th-16th century in Chalukya style architecture. Built of soft limestone and granite, Jagat Mandir features a vestibule, sanctum and a rectangular hall with porches on three sides. The temple has two entrances - "Moksha Dwara" (Door to Salvation) towards the North and "Swarga Dwara" (Gate to Heaven) on its North. The main temple included four sections- Vimangrih, Bhadrapeeth, Ladva Mandap and Arth Mandap. From plinth to walls to columns, every corner of the temple is profusely carved with panels of elephants, dancers, celestial being and musicians. Situated a short distance to its east is small lavishly carved Rukmini Temple. Built in the 12th century, the temple is dedicated to Krishna's wife.

Following are the main architectural features of Temple:

By Roadways: Tourists can easily get Gujarat Roadways buses to reach Dwarka from Jamnagar.

See below for temple time table:

Other Attractions in Rajkot