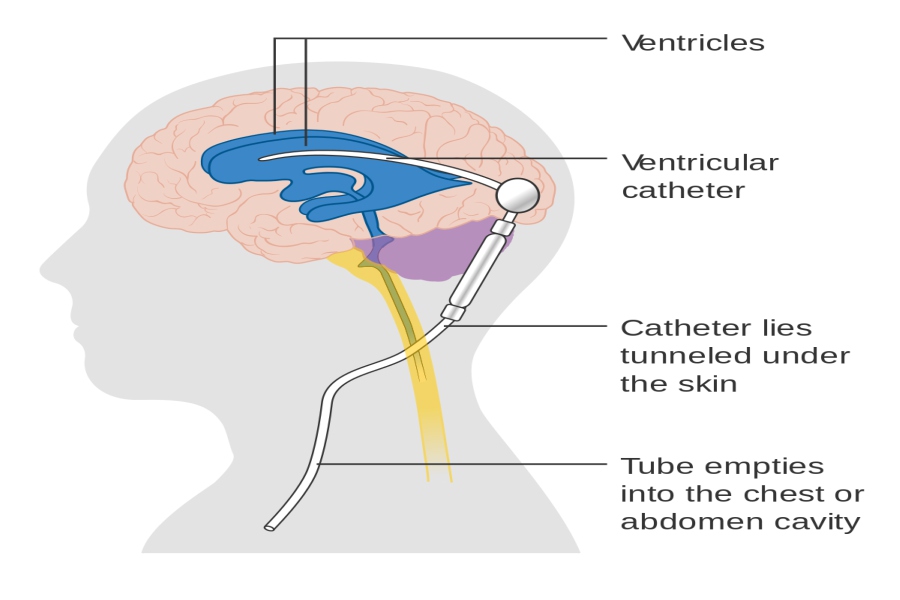 Our brain is constantly bathed in a cerebrospinal fluid that maintains the function and operation of the brain itself. The fluid goes on about the brain through cavities situated very deep in the brain, known as ventricles. However, if this cerebrospinal fluid (CSF) starts to accumulate in these ventricles, then its size may increase, causing pressure on the brain or the spinal column. This condition is known as hydrocephalus and it is one of the major causes of brain function impairment and damages to the brain tissue.

Hydrocephalus can occur at any age, but is mostly observed in infants and aged people. Many therapies are available to counteract the symptoms of functional issues due to the excess accumulation of cerebrospinal fluid, however, the surgical method to achieve the proper level and maintenance of cerebrospinal fluid is known as Ventriculoperitoneal Shunt surgery or VP Shunt.

CSF is responsible for providing the brain a cushioning effect alongwith the maintenance of pressure and removal of the waste products. This liquid is secreted by the tissues lining the ventricles of the brain which spreads to other regions during the functions of the brain. Over-accumulation of CSF can cause these effects to minimize, which can lead to serious complications in the brain.

The surgery of VP shunt mainly corrects the symptoms due to the retention of excess CSF and corrects all the issues due to the extra pressure of the fluid.

The CSF could be blocked due to a physical barrier that stops it from spreading across the brain, either from the ventricle to another ventricle, or from one ventricle to the other surfaces of the brain.

It has been seen that due to inflammation and problems within the brain itself, the brain tissues cannot absorb the CSF as much as it is produced. Therefore the excess amount of CSF gets stored in the empty spaces of the brain and causes problems.

Although it is quite rare in its occurrence, if the CSF is produced in the brain in more quantity than it is absorbed by the tissues, then the accumulation of CSF in the brain is possible.

Inflammation or tumor in the brain or in the spinal cord can cause retention of the CSF, which is corrected by a VP shunt surgery.

Attack and infection by different microorganisms that affect the central nervous system can give rise hydrocephalus, which may need to be corrected by VP shunt surgery.

Bleeding in the brain, either due to a stroke, or a head injury, can cause the CSF to accumulate in the brain cavity.

Violent force onto the head or any blunt force trauma can give rise to a condition of hydrocephalus, which can be surgically corrected by a VP shunt surgery.

The symptoms that may be the reason your brain surgeon chooses to perform a VP shunt vary depending upon the age of the patient. Some of the causes are common for all age-groups, whereas some can be observable in a particular population. The general indications that can be seen in the case of a hydrocephalus can be denoted as;

• A quick growth in the head size

• Fixed downward stare, known as the sunsetting of the eyes.

• Insufficiency in muscle tone and power

The preliminary treatment will be done by a basic neurological exam which will check for your muscle condition, well-being, movement and the speed of the functions taking place. Mainly, different imaging methods are used to detect the cause of this condition. The most common imaging procedures are;

A computerized tomography scan (CT or CAT scan) uses computers and a circling X-ray machine to create cross-sectional images of the body. They are used to picture the soft muscles, blood vessels, and bones in several parts of the body.

This system uses a high-intensity magnetic field to create a three-dimensional image of the body. This technique can show the detailed location and state of the spinal injury.

This is a familiar method in which lights of lower wavelength are used that pierces the soft tissues and shows an image of the inner bones and joints.

This technique uses high-frequency sound waves to create a picture of the internal situation of the brain. It is a basic and effective method of finding hydrocephalus, and often used to detect any accumulation problem in the fetus brain during pregnancy.

Some of the complications may consist of:

• Pain and redness of the skin at the place of the shunt tube.

• The doctor may give you bed rest for two-three days.

• Some pain is normal and treatable by painkillers and antibiotics.

• Mild exercises may be given to ensure the maintenance of functions.

• Stressful situations are to be avoided.

• The blood pressure, temperature, and the intracranial pressure will be checked periodically.

After it has been established that the treatment shall now proceed only by surgery, the physicians will organize you for the upcoming operation. The guidelines the physician may give you to follow before and during the procedure are:

The hospital caregivers will check for your case history, any alcohol or drug use, previous medical histories, any allergies, etc. Then they will check for any complications in your pulse or blood pressure.

Before the procedure, you will be given anesthesia at the position of the incision or will be made fully unconscious according to the type of surgery determined by the physician. Any personal items like jewelry, piercings, dentures, contact lenses will have to be detached during the procedure.Planning before the procedure may comprise of shredding the hair over the operating site. The surgical team may give you antibiotics to monitor the growth of infective microorganisms.

• You will be placed in a position with the chest facing up on the operating table.

• The part where the incision is made will have body hair shaved off.

• The head may be fitted to a frame.

• You will be given anesthesia locally or will be made fully knocked out.

• The surgeon will bore a hole in the skull and put a catheter in it, while putting the other subcutaneously behind the ear.

• These tubes will transfer the CSF into the abdominal cavity to be absorbed by the tissues.

• A specialized pump may be used to transfer fluid according to pressure or volume of deposition.

The rate of the treatment may be governed by the following features;

i. The charges of the instruments

ii. The price of the shunts and catheters

iii. The payments of the physician

Depending upon the usage and wear and tear, the shunts may work for years.

Yes, once it has served its purpose, it can be removed in a typical outpatient procedure.

Depending upon the health of the patient, the total recover may take up to a week to complete.