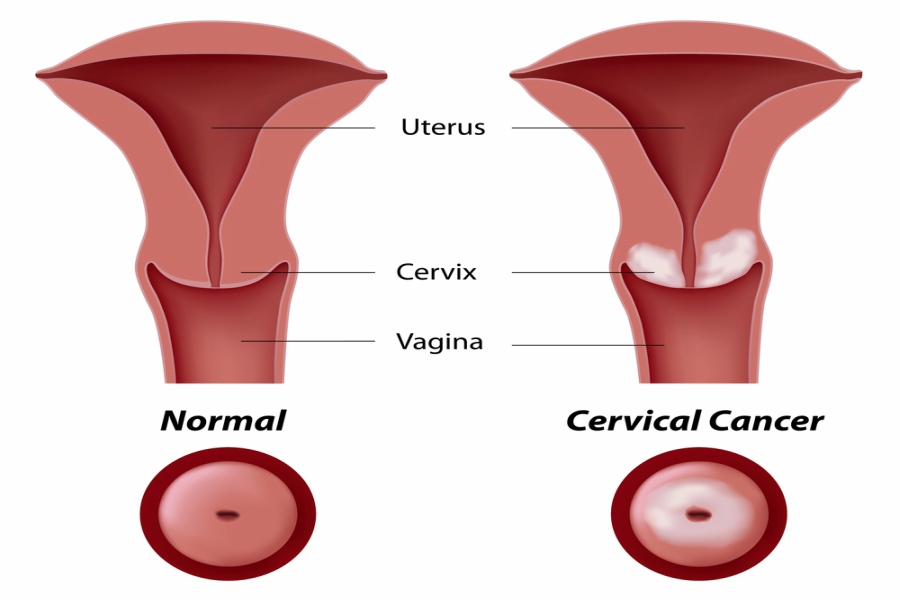 Cervical cancer is a condition that arises when the cells in the lining of the cervix (a long, narrow, cylindrical-shaped passage that connects the vagina and uterus) divide and grow abnormally. It usually affects women above 30 to 45 years.

Cervical cancer is of the following types:

Healthy cells grow, divide, and die at the right time and get replaced by new cells. But, when sudden changes occur in the DNA (genetic material) of cervix cells, the normal cell function gets disrupted, and the cells begin to grow and divide uncontrollably without dying, thereby resulting in the development of cervical cancer.

No symptoms may be seen during the early stage of cervical cancer. Hence, regular pelvic examination and pap tests are advised.

Regular screening helps in determining any abnormal changes in the cervix, which can be treated before cancer develops. The following are theroutine tests for cervical cancer:

If any symptoms of cervical cancer are present or the Pap test shows any abnormalities, then a colonoscopy is done.

Colonoscopy: It is an outpatient procedure, in which, a lubricated colonoscope (a thin, long, flexible tube with a video camera at one end) is inserted in the cervix to determine any abnormalities. If any abnormalities are seen, then a small sample of tissue is collected and examined.If cervical cancer is present, then the following tests are done to determine the extent of cancer:

Pelvic examination: To determine if cancer has spread to the womb, vagina, rectum, or bladder

Blood tests: To assess the kidney and liver functioning

Imaging tests: Tests, such as CT scan, X-rays, MRI to examine if cancer has spread to other organs.

Staging: The staging of cervical cancer is as follows:

Human papillomavirus (HPV) infection is a common, sexually transmitted disease that increases the risk of cervical cancer.HPV produces certain proteins, which may block the action of tumour suppressor genes (genes that control the normal cell growth), thereby allowing abnormal growth and division of the cells located in the lining of the cervix.

Besides HPV, several other factors may increase the risk of cervical cancer, including:

Smoking: Chemicals released while smoking may damage the DNA of the cervix cells and increase the risk of cervical cancer.

Sexually transmitted disease: Diseases such as chlamydia, gonorrhea, syphilis may increase the risk of cervical cancer. Multiple pregnancies: Woman who had three or more full-term pregnancies are found to be at ahigher risk.

The following measures must be taken after the surgery:

Common complications of surgery may include:

Based on the patient’s age, medical history, overall health, and stage of cancer, the following treatment options are available:

Early stage cervical cancers can be removed or treated with the following surgical options:

Total hysterectomy: An incision is made on the lower abdomen or on the vagina to remove the uterus and cervix.

Radical hysterectomy: An incision is made either on the abdomen or vagina to remove the uterus, cervix, and parts of the vagina. In some cases, ovaries, fallopian tubes, or surrounding lymph nodes are also removed.

2. Radiation therapy: High energy X-rays are used to kill cancer cells. In cervical cancer, radiation therapy can be used alone or in combination with surgery.

The overall cost of cervical cancer treatment in India is 3 lakh to 10 lakh. Sometimes, when the treatment duration extends, the cost will increase.

The cost of cervical cancer surgery is 30-50% less in India when compared with other countries.