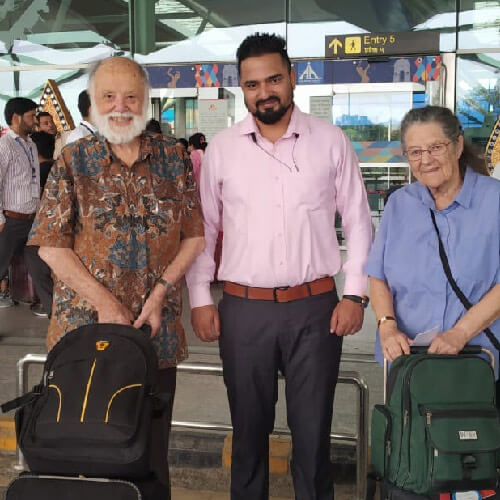 Mr. Donald Sams and his wife, from Canberra, Australia, were on a leisure tour across several places. In India, they planned their journey with Tour My India (TMI) and wished to visit Himachal Pradesh; this was their fourth journey planned with TMI. Unfortunately, on the flight to India, Mr. Sams had a rectal bleeding, causing a concern to the couple.

After landing in Delhi, on 1st October 2019, Donald conveyed the problem to the TMI executives. To address the concern, the TMI team escorted the couple to the Medanta Hospital and admitted Mr. Sams to the emergency department of the hospital. Upon consultation, a sigmoidoscopy was performed by Dr. Randhir Sud to analyse the problem; the results of the test were inconclusive. Thus, considering Donald’s age (75-80 years old), the doctor suggested him to stay in the hospital, where he can be observed and monitored by the medical professionals.

Mrs. Sams did not wish to stay in the hospital with Donald, but the hospital guidelines required a family member or a friend to accompany the patient during the stay. Hence, the TMI team arranged a staff member to accompany Mrs. Sams to the hotel, where she freshened up and picked the necessities for the hospital stay.

Colonoscopy was performed on the third day. The procedure revealed that Mr. Sams had rectal bleeding probably due to ulcerative colitis, which was diagnosed before. The condition was not critical, did not require any other intervention and could be managed by medical treatment. On 4th October 2019, Donald was discharged from the hospital.

After being discharged, Mr. and Mrs. Sams wished to continue their journey to Himachal Pradesh. But due to the circumstances, the doctor did not recommend Donald to travel to a hill station. The TMI team cancelled the bookings done in Himachal Pradesh and presented an option of visiting tourist places in Rajasthan. The couple was happy with this option, and the team made all the arrangements in a very short time.

Donald and his wife continued their leisure tour on 6th October 2019; they visited several places in Rajasthan, including Jodhpur, Pushkar, Jaipur, Salasar, and Agra. During the trip, Donald did not have any episode of rectal bleeding.

Mr. and Mrs. Sams were impressed with the arrangements and were very happy with their trip. They left India on 15th October with a wonderful experience.

The Tour My India team wishes Mr. and Mrs. Sams good health, and may they travel and explore more places in India!