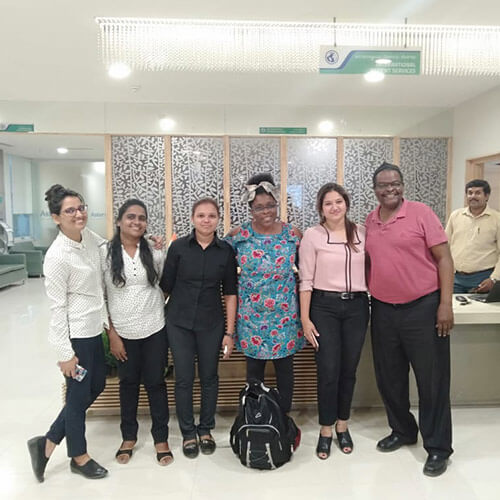 A patient from Cameroon underwent procedure for retinal detachment


Tabi Wilfred Fon, from Cameroon, was diagnosed with retinal detachment. His son, William who lives in Ireland, was exploring options for the treatment in India. While exploring online, William discovered Tour My India (TMI) website, where he requested a quote for the procedure.
William shared the reports with the Medical Advisor of TMI. Wilfred's family had heard that Narayan Nethralaya was a good option; however, the TMI team presented the option of Aster CMI, Bengaluru as well. After a thorough comparison, they decided to opt for Aster CMI.
William did all the travel bookings and looked for accommodations. The TMI team provided a few options for the accommodation; out of the options given, William selected a homestay for his family. The process of travel and accommodation booking took nearly a month.

Tabi Wilfred Fon, and his wife, Nagwa Tabi Judith's, arrived in Bangalore on 28th February 2019. The TMI team coordinated and organised for a complementary pick up and drop facility from the airport; Wilfred and Nagwa were accommodated comfortably in their homestay.
On 3rd March, Wilfred consulted Dr. Rajani Battu of Aster CMI Bengaluru. Upon examination, the doctor found that the pressure in the eye was too high. In such circumstances surgical procedure is not recommended. The doctor asked Wilfred to wait until the pressure reduces, for which he prescribed some medications.
Wilfred had problems with his vision, thus he required constant assistance. The team of TMI coordinated with the patient, and he was taken care by the staff of Aster CMI hospital.

After the pressure reduced, Wilfred could undergo the procedure. On 18th March, the surgery was performed successfully.
The procedure for retinal detachment involves pressing the detached retina and placing it in place using a bubble.
The procedure was followed by laser treatment on 24th March, where the retina was reattached firmly in place.

The doctor advised the post-surgery measures to be taken for a healthy recovery. Wilfred was able to see in a few days' time.
Wilfred and Nagwa stayed in India for a month. During the stay, Nagwa also underwent a complete health check-up.
Both Wilfred and Nagwa were happy with the assistance provided by TMI team. They were impressed with the coordination of the team, and the arrangements made. They expressed their gratitude and blessed the team.
Tour My India team wishes Wilfred and Nagwa a bright future and a healthy life.