North Bengal Shows the Way as Rhino Population Increases by 12%

Good news for the conservationists across the country, the rhino conservation programmes in India has shown a positive result. The population of Indian Rhino in North Bengal increased by 12% over the period of four years. The successful conservation story has inspired many other states to implement such strict guidelines for animal conservation in India. North Bengal is also credited for controlling the cases of poaching and providing better habitat for wild animals.

List of Top Wildlife Sanctuaries and Reserves in India

Indian Rhinoceros also known as One-Horned Rhinoceros are a native species found in India. Placed under Vulnerable list of IUCN Red List, Rhino population was one of the worst affected species in India. A constant threat of poaching along with shrinking habitat meant that the country lost a majority of its Rhino population to just 2500 in 2008. One of the most interesting facts about One-horned Rhino is its unique horn which is made of the same protein which constitutes the formation of hairs. 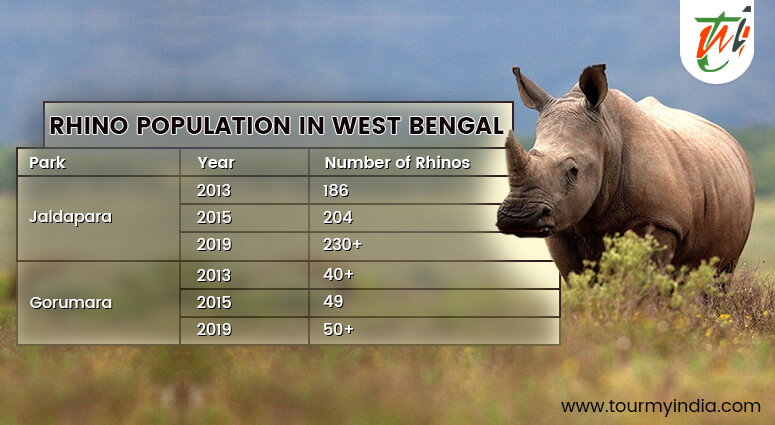 The numbers were estimated after a census was conducted based on the direct sighting. The Chief Conservator of Forests, North Bengal Division, Ujjwal Ghosh said that they have given the count with an upper and lower limit as direct sighting method is not the best form to estimate the actual population.

During the census at Jaladpara, 231 rhinos were spotted but there can be more, said Ujjwal Ghosh. He said that the same procedure was followed in Gorumara too. However, he said that besides direct sighting the officials also collected rhino dung sample to determine the final number and ascertain the male and female count.

Chief Wildlife Warden, Ravi Sinha said the Wildlife Institute of India (WII) said that Institute would carry out the further studies to determine the exact male-female ration in the region.

Conservation of Wildlife and its Habitats in West Bengal

The need for determining the sex ratio

Ravi Sinha said that there is an immediate need to determine the sex ratio as both the rhino habitat in North Bengal are connected the authorities need to be aware whether if the parks have reached their carrying capacity. If the population is increasing, new policies would be needed for Safeguarding India’s rhinos in North Bengal.

While earlier the conviction of poacher was considered an anomaly, recently there has been an increase in conviction of cases pertaining to rhino killings. Apart from that, the state government has ensured that rhinos are provided with proper habitat.

Know Why We Need to Save Wildlife 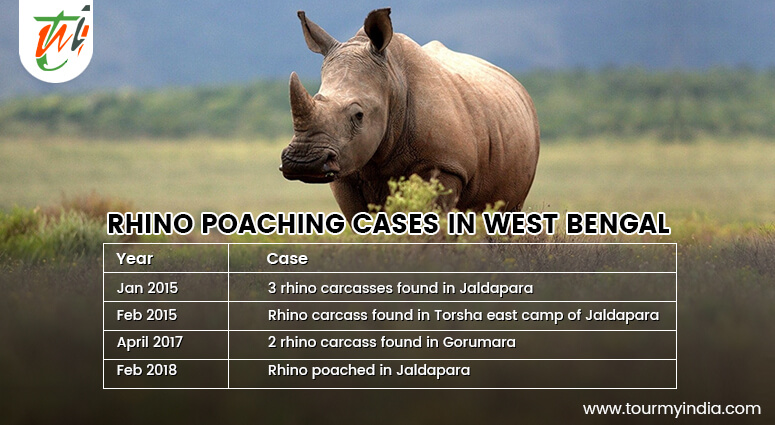 Between February 2015 to February 2018, there have been 7 cases of rhino poaching. Despite strict vigil, poachers have managed to kill 7 rhinos.

The first and foremost step to ensuring rhino preservation in India is protecting them against the poachers. Implementation of the Wildlife Protection Act is an absolute necessity. Apart from that the case presented by the prosecution should be airtight. In most cases, poachers are not found guilty is because of weak prosecution and empowering that can lead to better conviction rates.

The forest officials in North Bengal have introduced patrolling both on foot and vehicles inside the national park. They said that elephants are also being used for patrolling. In recent times there have been concerted efforts to strike at the illegal animal trade. With stricter laws and better prosecution, alongside vigil can minimise the cases of rhino poaching in India.