Experience the Magic of Golden Triangle Circuit in India 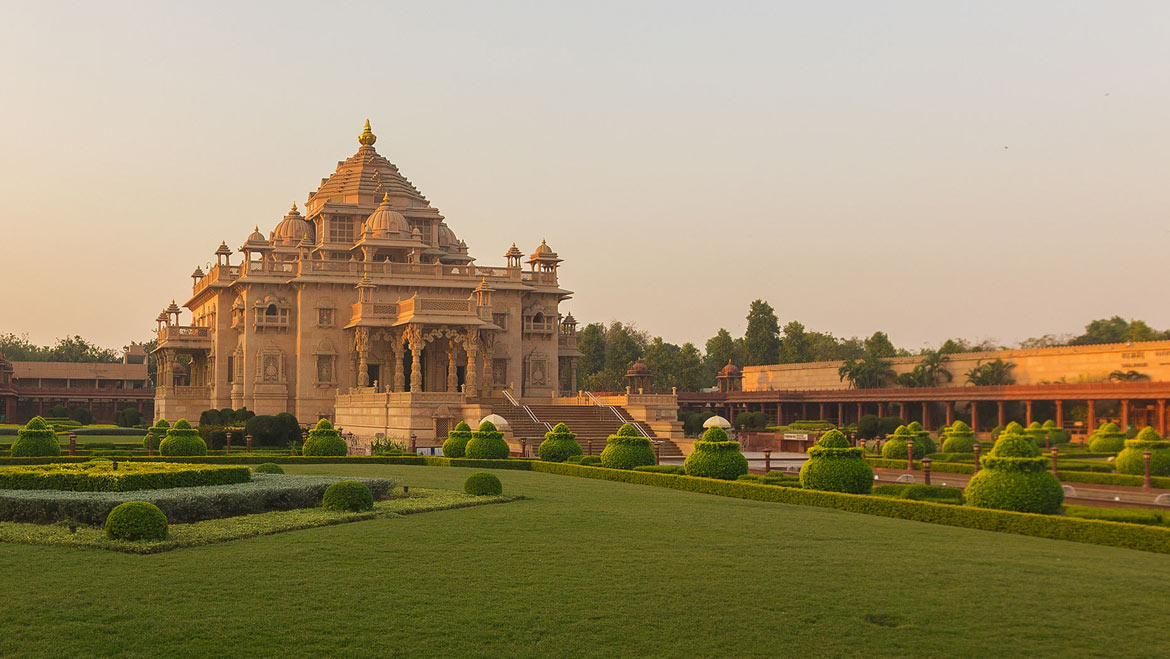 The busy lanes of Delhi, the love symbol of Agra, the palaces of Jaipur – Golden Triangle Tour, what else do you need to explore the bonafide elegance of India.

The Golden Triangle Circuit is bestowed with various edifices that stand as a perfect example of India’s rich historical legacy. Along with historical monuments, this circuit welcomes the globetrotters with the colorful culture of the place. Thus, Golden Triangle Tour is a must do trip for all those who simply love to relish the grandeur of India.

What is the route of Golden Triangle Circuit?

The journey commences from Delhi, then heads towards Agra, and the final stop is Jaipur. All these three cities are almost located at equal distance from one another, approx 200-250 kilometers. In addition to this, there is one more thing that the three places have in common – the beauty, the charm that entices travelers from different nooks and corners of the world.

“Ye shehar nahi mehfil hai (It is not a city, but a gathering)”

Famous for its over-crowded lanes and tangy street food, Delhi is a place where one can find people residing from different walks of life. It is one of the biggest and busiest metropolises of India, but the unique fact about it is that amidst the fast paced life, this city embraces various examples of sheer architectural excellence. 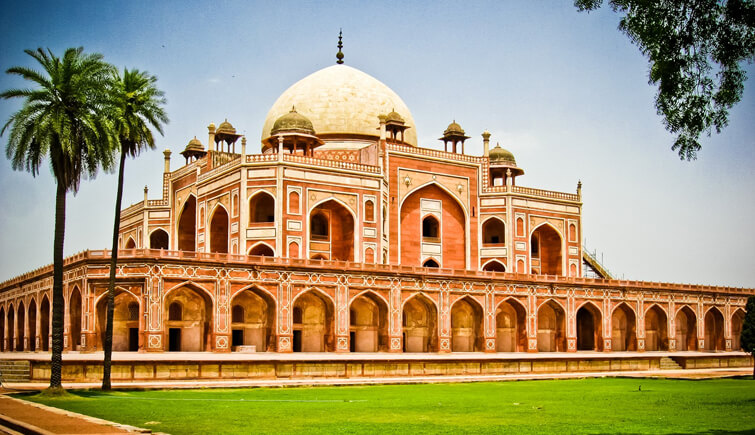 Delhi is bejeweled with two renowned World Heritage Sites of UNESCO – Qutub Minar and Humayun’s Tomb. Built in the early 13th century, Qutub Minar is a red sandstone tower possessing a height of 72.5 meters. Further, the Humayun’s Tomb is the first garden-tomb constructed in India. It was built in 1570 A.D and served as an inspiration for various other monuments.

It is one of the most famous Mughal monuments of Delhi. This edifice was constructed as a palace fort of Shahjahanabad (one of the Mughal Emperors). The real zenith of creativity of the past era can be clearly seen in this elegant monument.

Built in the shape of a lotus, this temple is a perfect place that renders absolute peace of mind. Further, this is a unique temple that can be visited by anyone irrespective of his or her religion. Perhaps that is why it is known for being one of the most serene places of India.

Devoted to Bhagwan Swaminarayan, this temple portrays India’s ancient art, culture, and architecture at their best. The temple authorities greet the visitors with different exhibitions and a musical fountain show, and both of them work as a great crowd puller.

Jama Masjid is among the oldest edifices located in the capital city. This is a Muslim shrine and the best time to visit it is during the Eid festival. On Eid the Masjid is embellished like a bride.

Located at the bank of River Yamuna, Raj Ghat is the memorial to Mahatma Gandhi. Irrespective of nationality, almost everyone knows Mahatma Gandhi and his remarkable contributions towards the country. This memorial is like a little tribute paid to the great man.

Built in 1724 by Maharaja Jai Singh of Jaipur, it is a large astronomical instrument. Though in the present time it is surrounded by various towering buildings and accurate measurements cannot be made, the ingenuity used in the construction fetches accolades for the structure.

Another example of wonderful architectural creativity is the Parliament House. It is a circular colonnaded building that has ministerial offices, committee rooms and a huge library. Constructed in the imperial style, it has 144 columns and the front side is adorned with a beautiful garden.

In addition to the above mentioned places, travelers can also visit the Garden of Five Senses, India Gate, Lodi Tomb, Shanti Van, Birla Mandir, Old Fort and so on.

Where to shop in Delhi?

Connaught Place or popular as CP, is among the biggest shopping spots of Delhi. Be it food, clothes, accessories, books, movies or what not, anything and everything is easily available. Over the years many shopping complexes have emerged in CP, but since decades the Palika Bazaar and Janpath Market have been ruling the area.

On one hand the Paranthe wali gali tickles the taste buds with spicy and scrumptious flavors, and on the other hand the Dariba Kalan and Kinari Bazaar dazzle the eyes with various sparkling jewels. This makes it clear that the overcrowded lanes of Chandni Chowk are nothing less than a paradise for shopaholics, be it cloths or books or even electronic goods, Chandni Chowk is the place to be.

Looking for fashionable clothes at affordable prices? If so, you must visit the Sarojini Nagar Market. Located in the South-West district of Delhi, Sarojini Nagar Market is the best station to buy belts, bags, home furnishings, cosmetics and much more at pocket friendly rates.

Another market place which is famous for exhibiting beautiful clothes is the Lajpat Nagar Market. Salwar kameez and kurtis for women and kurtas for men are the specialties of the respective market. Further, Lucknowi embroidery can be easily found at Lajpat Nagar.

Note: Don’t forget to take your bargaining skills along while shopping in Delhi.

Best Things to Do in Delhi on Weekends

“While the sun descends below the horizon, Agra portrays its beauty at the best.”

Agra, the splendid city was previously recognized as one of the most powerful states of the Mughal Empire. The impact of Mughal rule over the city can still be seen through various beautiful monuments standing upright since decades.

‘The Seventh Wonder of the World’, ‘A World Heritage Site’, ‘A Love Poem Written in Marble’, ‘A Symbol of True Love’, and so on. Whenever it comes to describing the elegance of Taj Mahal, even a book can run short of pages. Built in the remembrance of Shah Jahan’s beloved wife Mumtaz Mahal, this edifice is not only known for holding love in the air, but also for embracing profusion of creativity in every corner.

With the backdrop of Taj Mahal, the Agra Fort is another World Heritage Site located in the city. This edifice was also constructed during the Mughal Rule. It is said that in 1565 A.D, Emperor Akbar initiated the construction of the fort, but it was later accomplished by his grandson Shah Jahan.

Fatehpur Sikri or better known as the ‘City of Victory’ served as the capital of Mughal Empire for 10 years. Built by the Emperor Akbar during the 16th century, this city is bestowed with various edifices and temples possessing a uniform architectural style. Perhaps that is why Fatehpur Sikri is a part of the coveted list of UNESCO’s World Heritage Sites.

Like Delhi, Agra also embraces one of the largest mosques of India – Jama Masjid. Better known by the name of the ‘Friday Mosque’, it is among the most visited pilgrimage sites. Further built in 1648, this mosque is a beautiful blend of Mughal and Iranian architecture.

Besides all this, one can also sneak a quick look at the Mehtab Bagh, Akbar’s Mausoleum, Tomb of Itimad-ud-Daulah and Chini Ka Rauza.

Where to shop in Agra?

Owing to its proximity to Taj Mahal and Agra Fort, Sadar Bazaar is one of the most famous and most visited shopping destinations of the place. This market is highly popular among the tourists as well as locals for exhibiting the finest collection of beautiful handicrafts and durable leather items. People visiting to Agra must visit the Sadar Bazaar.

Right from bejeweled statues to traditional ornaments, every jewelry article can be found in the Kinari Bazaar. Be it a trinket to flaunt at a formal gathering, or a heavy jewelry piece to wear in a marriage, something for every occasion is available here. Along with jewelry, the market is famous for having a fantastic collection of bridal wear.

Best Places to Visit and Outdoor Activities to try in Agra

“Immersed in the multihued and rich culture of the Royal Rajasthan, there is more to Jaipur than meets the eyes”

The capital of Rajasthan, Jaipur is the last destination of the Golden Triangle Tour in India. Jaipur is known for embracing the true essence of the royal land. Right from its scrumptious dishes, vibrant markets and certainly the forts and palaces, everything serves as a delight to the visitors.

City Palace, Jaipur is not just a palace, but a palace complex built during 1729-32 by Maharaja Sawai Jai Singh II. Another uniqueness of this palace is its architecture, which is a mix of Rajput, Mughal and European styles. Further, Chandra Mahal and Mubarak Mahal (two most beautiful and famous palaces) are a part of this complex.

Popularly known as ‘Hawa Mahal – Palace of the Winds is a splendid five-storey palace. It was constructed by Maharaja Sawai Pratap Singh in 1799, and cuddles the very essence of the Rajputana architecture. The design of the palace is like a beehive castle with lots of small windows or ‘Jharokhas’ that allow easy passage of air throughout the Mahal.

Another model of Rajputana structural design is the Nahargarh Fort. This fortress was initially called as the Sudarshangarh Fort, but later it was renamed as Nahargarh that literally means the ‘abode of tigers’. Further, it was also built by the same king who constructed the City Palace – Maharaja Sawai Jai Singh II.

Located just 11 kilometers from Jaipur, the Amber or Amer Fort is among the oldest fortresses of India. Though the fort has lost its outer charm, it is still marvelously beautiful from inside. Buildings like Sheeh Mahal, Sukh Mahal, Diwan-e-Aam are an integral part of the Amber Fort.

Where to shop in Jaipur?

Be it a blue or white sapphire, ruby or emerald every precious and even semi-precious stone is available at the Johari Bazaar. It is one stop destination for all, who love the spark of the dazzling gems.

While the Johari Bazaar is known for jewelry, the Bapu Bazaar is famous for clothes. It is a wholesale market, wherein you can get both traditional and modern outfits. Though popular for dresses, the market also exhibits various other items like bags, cosmetics and so on.

How many days are needed to do this trip?

Minimum days required for enjoying Golden Triangle holidays in India are 4, and maximum varies from person to person. It completely depends on the traveler that how many days he can steal from his busy schedule. However, an ideal trip to the Golden Triangle Circuit can be completed within 7 to 8 days.

How to plan a Golden Triangle Tour in India?

Being one of the most visited circuits of India; there are various tour operators who arrange different Golden Triangle Holiday Packages as per the requirement of the travelers. However, you must select a reliable tour operator.

One of the easiest standards to check the trustworthiness of a travel agency is to check its registration. A reliable tour agency must be approved by different government authorities like the Incredible India, Department of Tourism, Indian Association of Tour Operators and Travel Agent Association of India. Thereafter, all you need to do is ask the selected travel agent about the best time to visit Golden Triangle, and head off for the most memorable journey of your life.