A cultural retreat, virtue over sins, a celebration of life over death and a lot more, Kumbh Mela is the largest Hindu Festival in India. Being one such spiritually and uniquely mesmerising fest, Kumbh Mela is a gathering of Vedic Sanatan Dharma devotees who come from different walks of life to discuss traditions, faith, spirituality and more.

With a number of displays, stalls and shops, pilgrims coming to this largest religious event get a unique experience like never before. Perhaps, this is the only best place where one gets to witness the raw spiritual culture that exists in India. With this tourist being a part of India’s Mega Kumbh Festival, come across the centuries-old rituals being performed by saints and sadhus in the most magnetic and hysterical energy.

This was about why Kumbh is organized, let’s quickly take a walk into the history of Kumbh Mela and learn more about the largest human gathering. 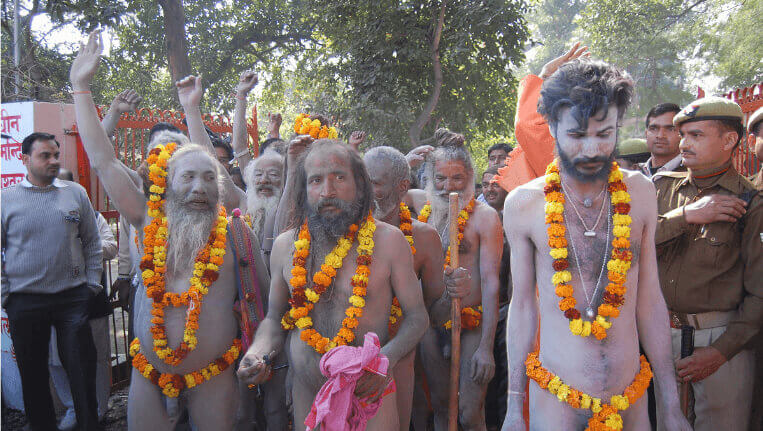 Deriving its name from the immortal pot (Kumbh) of nectar described in the ancient Vedic scriptures called Puranas, Kumbh Mela has mythological stories related to it. The significance of this grand Hindu Mela and mythology dates back to the time when Deva (demigods) and Asuras (demons) were indulge in a battle for the pot of nectar. In the sense, the mythological significance of Kumbh revolving around the story of the Samudra Manthan or ocean churning which was done by the gods and demons to obtain nectar of immortality. The task was too sturdy for them and with a mutual agreement they decided to complete it in full and share the nectar of immortality in half.

Initially, the churning of the milk ocean produced a deadly venom which was consumed by Lord Shiva. The venom accumulated in his throat turning it blue after which he is also named as Nilkantha. While he was drinking, a few drops happened to fall from his hands which were licked by the snakes, scorpions and other deadly creatures. On the other hand, the Mandara Mountain began to sink deep into the ocean with which Lord Vishnu incarnated as a tortoise to support the mountain on his back. Some 1000 years later, Lord Dhanwantri appeared with the Kumbh of nectar in his hands. This time the demigods being fearful of the ill intentions of the demons, seized the pot of nectar entrusted onto the four Gods – Brihaspati, Surya, Shani, and Chandra.

Demons who learned about their part of agreement went after the demigods and continued chasing for snatching the pot of nectar. During the course of this fierce fighting, it is believed that Lord Vishnu gave the nectar to Garuda which is a holy-bird to take it back to heaven. The demons chased Garuda and a fight broke out which lasted 12 demigod days, meaning 12 human years. It was then, to save the Kumbh of nectar, Garuda was forced to place the Kumbh at Prayagraj, Ujjain, Nashik, and Haridwar. Since then, every 12 years, the Hindu religious festival is organised at these 4 destinations on the banks of river Godavari in Nasik, river Shipra in Ujjain, river Ganges in Haridwar, and at the Sangam of the Ganges, river Yamuna and Saraswati in Prayagraj.

Okay, now that we are done with the historical significance of Kumbh Mela, I have mentioned below yet another interesting element of the largest Hindu religious festival i.e., the Akharas of Hindu Saints. Let’s get into it: 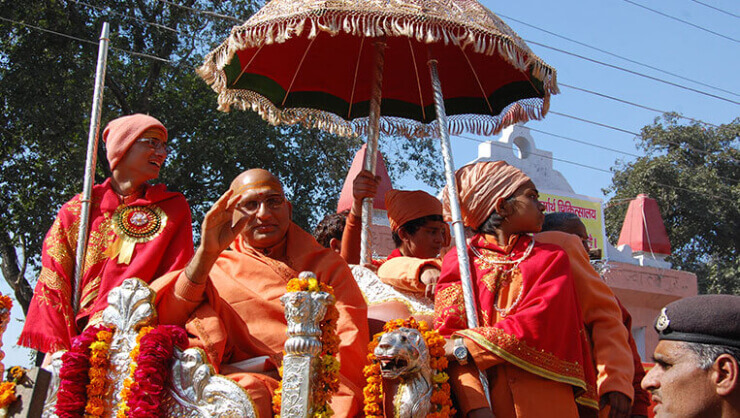 Considered as an integral part of Kumbh Mela, Akharas were formed in the 8th century by Hindu seer Adi Shankaracharya with the aim to unite organisations of the sadhus and saints to protect the sanatan way of life. Each akhara houses followers of similar religious customs, views and ideologies, who specialise in both scriptures and weaponry. These akharas having a special historical and religious significance are categorised on the basis of deities they worship. The categories include Shaiva, Vaishnava and Udasin.

Out of all the other sadhus, saints and aghoris, the Naga Sadhus of India play a significant role in the Kumbh Mela who very enthusiastically head to the akharas by singing and dancing which is known as Peshwai and initiate the bathing rituals. Earlier there were only 13 akharas but this year, one more has been included.

Let’s learn about these 14 famous akharas of the Kumbh Mela:

Being one of the biggest akharas in Kumbh Mela, Juna Akhara was founded by Adi Shankaracharya with its headquarters located in Varanasi.

The interesting fact about the Juna Akhara is its rich tradition of the Naga Sadhus who are ordained to this post only during the Kumbh and Mahakumbh Mela. The Juna Akhada worships Lord Dattatreya along with their 52-foot high holy flag.

There are about 50 mahamandaleshwar whose favored god is Kartikey, Lord Shankar’s son. The head of the Akhara is Swami Mahant Ravindrapuri who is the president of Akhil Bharatiya Akhada Parishad (ABAP).

With headquarters being in Prayagraj, Mahanirvani Akhara is a five-member body who worships Kapilmuni Maharaj. The Mahanirvani Akhara elects its administrative body through an election which is headed by Shri Mahant Yamunapur Ji Maharaj, the secretary, and Mahant Ravsevak Giri.

The headquarters of the Atal Akhara is in Varanasi and claims to be one of the oldest akharas. The Atal Akhara worships Lord Ganesha and only Brahmins, Kshatriyas and Vaishyas get the initiation to this akhara.

In addition to this, the seers of the Atal Akhada are also called Atal Badshah. Out of all the other akharas in Kumbh Mela, it is the Atal Akhada that conduct an ordination ceremony of Naga sadhus in the second Shahi Snan (royal bath).

The headquarters of the Avahan Akhara is in Haridwar and worships Lord Shri Dattatreya and Shri Gajanan. The akhara has its offices spread over places including Gujarat, Madhya Pradesh, UP and Bihar.

Other than this, it is believed that the saints of Avahan Akhara were the first to respond to the call of Adi Shankaracharya.

Yet another akhara whose headquarters is located in Junagarh, Gujarat. In Agni Akhara only Brahmachari Brahmins get the initiation who are favored by Dev Gayatri.

The Agni Akhara do not have the Naga Sadhus but Brahmins who wear Janeu (a sacred white thread) who can later join other akharas as a Naga if they desire. Other than this, the saints of Panch Agni Akhara do not consume any intoxicant and only consume self-prepared food.

Considered as the second oldest akhara, Anand Akhara is known for its opulence and worships Dev Bhuwan Bhaskar Suryanarayan. The headquarters of this Akhara is in Nashik, Maharashtra with offices and ashrams spread all across the country.

The headquarter of the Nirmohi Akhara is in Haridwar and was founded in the year 1720. Falling under the Vaishnava category, Nirmohi Akhara worships Lord Hanuman and specialises in hoisting a 52-foot high white flag and is governed by the members of Shree Panch.

Known for its simplicity, the Naya Udasin Akhara was founded in the year 1710 by the sadhus of the Bada Udasin Akhara. The akhara follows different traditions as compared to most other monastic orders. The royal entry of Naya Udasin Akhara have no Acharya, no palanquin and no spears or arms.

Linked to Sikhism, Nirmal Akhara was founded by Shri Durga Singh Maharaj in the year 1856 in Punjab. Having its close ties with Sikhism, Nirmal Akharas Isht Dev Pustak is Sri Guru Granth Sahib. As Guru Gobind Singh had sent a batch of five saffron robe seers (Panch Nirmal Gaurik) to Varanasi, it is believed, after learning these seers formed their own sect by the name of Nirmal Sampraday.

Here the seers are generally dressed in saffron and often travel spreading the message of the ‘Sanatan Dharma’. Other than this, they even worship the weapons.

With the headquarters located in Haridwar, Nirvani Ani Akhara worships Lord Hanuman as its presiding deity. Here, the seers are seen with Tilak on their forehead. Other than this, the speciality of Nirvani Ani Akhara is their red colour flag.

As of now, there were 13 Akharas, now Kinnar Akhara has also been included in Kumbh Mela. The Mahamandaleshwar of Kinnar Akhara is Lakshminarayan Tripathi. 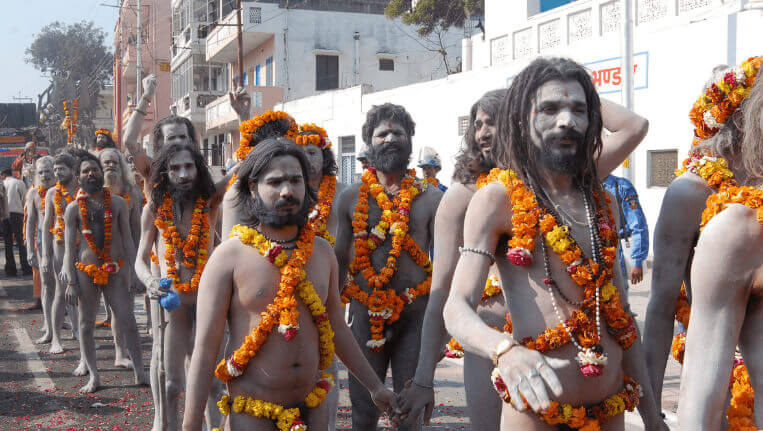 As already discussed above, how the Naga Sadhus plays a significant role in the Akharas, we will now take a quick look at the life of Naga Sadhus in world’s largest congregation of Hindu religion pilgrims and along with some some lesser known facts.

So, this was all about the history and the Hindu Saint Akharas of Kumbh Mela.

If you want to know more about things to do in Kumbh Mela or looking for such spiritual tour- Haridwar Kumbh Mela – 2021, you can get in contact with Tour My India. Give us a call at +918744012088 or send us your queries at info@tourmyindia.com and we will get back to you with best travel packages or tailor-made packages that suits your needs and preferences.