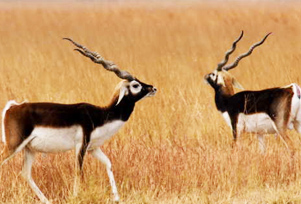 Elusive and exclusive, Velavadar Blackbuck National Park in Bhavnagar has something exciting to offer everyone. As the name suggest, the park is home to the rare population of blackbuck, which are hard to find in India. Created in 1976, and nearly doubled in size in 1980, the park now covers 34 square km, which is barely one-sixth the size of the city of Ahmedabad. An excellent place for nature lovers and wildlife enthusiast, Velavadar National Park was initially a private grassland for the Maharaja of Bhavnagar. Other than the whimsical blackbucks, the park houses the sizeable amount of bird and animal species that consider their small wetland a part of their home. Some of India's largest herds of this antelope are seen in this park. Jeep safari and trekking is the best way to explore the best of Velavadar National Park. One should avoid visiting the Velavadar National Park during the monsoon region as the area is more prone to flood. 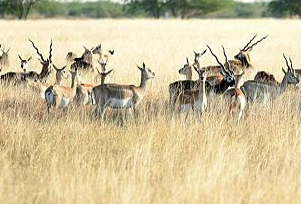 Velavadar Blackbuck National Park is home to the largest surviving population of blackbuck, an ungulate species of antelope native to the Indian subcontinent. Other than blackbucks, the national park shelters mammals like nilgai (another Indian antelope), jackal, wolf, jungle cat, and fox. Birds are the main attraction of the park, which makes tourists visit worth every effort. Pelicans, flamingos, white and painted storks, three kinds of cranes, many birds of prey, and the rare Stolizca's Bushchat are some of the rarest bird migratory bird species that are feel flying in the azure sky.

Best Time to Visit: Mid October to December & January to May

Note: Extra charges for photography in the park

Other Attractions in Bhavnagar