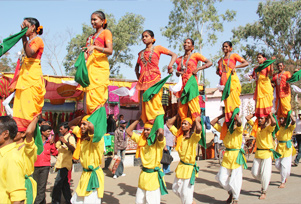 Celebrated few days before Holi, Dang Darbar is an important Tribe festival of Gujarat. The Tribal festival is commemorated to honor the forefathers of five kings of Gadhavi, Pimpri, Amala-Linga, Vasurana and Daher. On this festival, all the five kings receive pensions from the state government. Festival tradition is believed to be 150 years old, even after independence the festival continued, though in 1954 the privileges of the kings and naiks were cancelled and instead hereditary political pension was granted to them. In the festival, tourists can find stalls exhibiting art and craft items made by tribal people. Also, visitors will get a chance to see various Tribal dance forms. It is that time of the year when all the trials from the adjacent districts get down to Dang to celebrate, drink and make merry.

Note : Generally Dangs & darbars helds prior a week of holi festival but dates will be declared by forest department 02 months prior