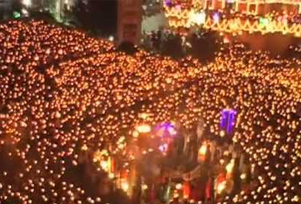 Ambaji Temple (an ancient temple in Gujarat) comes to life during Bhadrapad Ambaji Fair. The Bhadrapad Ambaji Fair is held at a village, outside the Ambaji temple. The festival calls on sanghas (pilgrim groups) in huge number. Sanghas perform a traditional folk dance, popular drama and garbas on the full moon night and sing songs by using simple instruments like pakhwaj, hun gal and jhanjh. The festival takes place in the months of August or September and it's the best time to visit the Ambaji temple as the landscapes around are lush green and the tiny water streams around are brimming with a sparkling water. During the festival, pilgrims walk barefoot to the temple, sing songs of praise and some of them even attend readings of the Saptashati: 700 verses in praise of the Goddess Ambaji. Multiple recreational activities like game stalls, tattoo centres are installed in the Bhadrapad Ambaji Fair. During the festival, the tourists should savour scrumptious local food and enjoy various cultural programmes.

Ambaji Temple, important religious landmarks, is one of the 51 Shaktipeeths (place of worship consecrated to the goddess Shakti or Sati). The temple is said to be the original Shakti Pithas (religious texts). It's also said that heart of Goddess Ambaji fell on this part of the earth (where the temple is located) when her body was dismembered. There is no idol of goddess inside the temple because the temple is so ancient that it predates idol-worship. Priest of the temple is decorated the upper portion of the gokh (teasel) in such a way that it looks like an idol of a goddess from a distance.

When: Hindu month of Bhadrapad (around August-September)