A politician whose love for animals can be easily seen by the initiatives that are taken by her, the Union Minister of India, Maneka Gandhi is opening the next hospital for animals in Raipur, Chhattisgarh. The best part about the step is that she is selling her own collection of 19th Century miniature mica paintings in the upcoming India Art Fair to raise the funds for the hospital. Setting a benchmark for the conservation of wildlife and inspiring people every now and then, Maneka Gandhi is widely known as an environmentalist and animal rights leader in India. The Union Minister doesnât fail in being the voice of the innocent animals who are mistreated in India and is also the proud founder of People for Animals(1992), the largest animal rights organisation in the country.

This time as well, the Union Minister has come up with the idea of selling her treasured collection of mica paintings to raise funds for the hospital she dreams of setting up in Raipur. The land for constructing the hospital is already allotted by the State Government to the organisation as it will be the first one in Chhatisgarh. Maneka Gandhi will be putting her collection of 200 paining from her Delhi residence on auction which she has collected over the years and are considered among the artefacts that belong to the 19th Century representation of India in Europe. These miniature mica paintings represent India and its manifolds like occupations, religious events, castes, tradespeople, Gods and Goddesses and the flora and fauna. 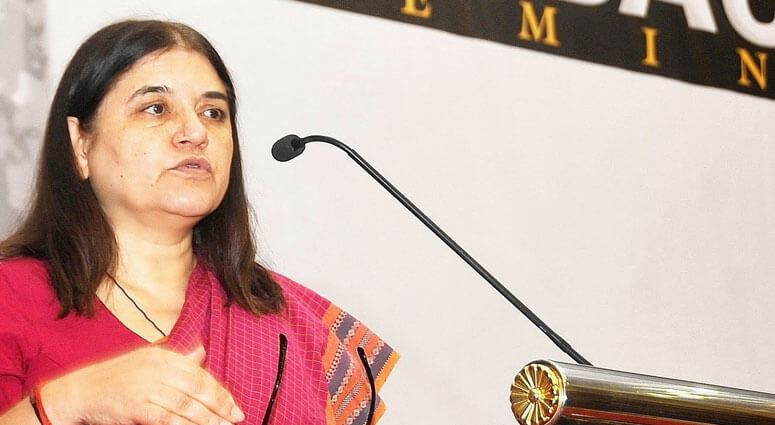 As people for Animals is not supported by the Government hence Maneka Gandhi raises funds and spreads the word for the good cause by auctioning her own prized possession. In yesteryears, Maneka Gandhi has auctioned her possessions where in the year 2001, she sold her designer candles; 2016 was the year she auctioned the oleographs of Raja Ravi Varma and in 2012 she put her ceramic platters from studio platter on sale. The fund so raised was donated to the hospitals that are run by People for Animals organisation. The Union Minister also tried her hand at offering the rare miniature paintings to the National Museum, but the authorities declined the offer. The mica paintings that exists in a number of 7000 only at present time symbolise the Company School of Painting, the Indo-European style of paintings assigned by European patrons and the history of Indian art. Talking of which, places like Patna, Banaras, Trichinopoly and Murshidabad were the famous spots that are depicted in the paintings. As per the Union Minister, the price of these exquisite paintings range between Rs. 35,000 to Rs.1,50,000 depending upon the quality and size where the smallest is 5cmx7cm and the biggest is 12cmx15cm.