The rebuilt statue of the renowned 8th century philosopher Adi Shankaracharya which has just been installed on 5th November 2021 behind the holy Kedarnath Temple is blazing bright with beauty and standing in pride with its full charm.

Unfortunately, the statue of Sri Adi Shankaracharya was washed away in 2013’s drastic floods in Uttarakhand. Its reconstruction work has been going on since 2019 and the statue was installed in the month of November in 2021. Ever since the Shankaracharya statue in Kedarnath was rebuilt, it has become a wonderful sight to behold for pilgrims who visit Kedarnath Shrine as a part of holy Char Dham Yatra.

Let’s know about Adi Shankaracharya Statue at Kedarnath in Detail 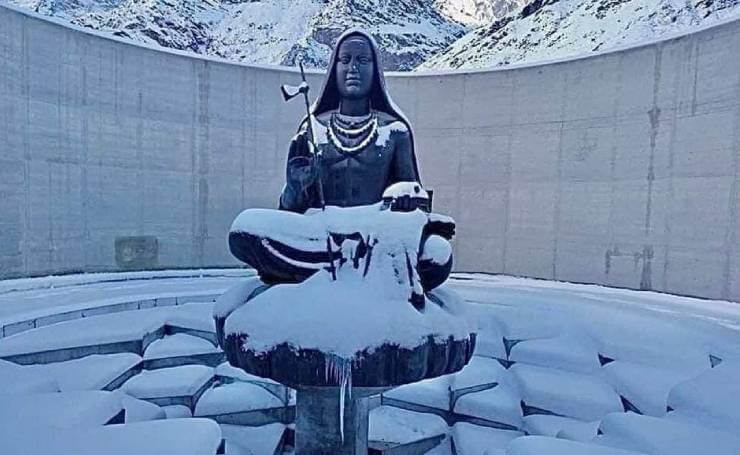 Who was Adi Shankaracharya?

Adi Shankaracharya is a renowned Vedic scholar, saint and Hindu philosopher who lived around 8t century. He is the founder of Char Dham Shrines – Kedarnath Temple, Badrinath Temple, Gangotri Temple and Yamunotri Temple which are now major Hindu pilgrimage destinations to visit in India. It is said that at the age of 32 he achieved Nirvana (enlightenment) near Kedarnath Mandir. It is believed that he merged with the pious land of Kedarnath. He also built the hot water spring near Kedarnath Dham to protect his followers from extreme weather conditions of the Himalayas. He also established four Mathas (Ashrams) in different parts of India around 700 AD. One of the four Mathas is located in Jyotir Math in Chamoli District of Uttarakhand.

The rebuilt samadhi of saint Adi Shankaracharya is a wonderful attraction. The ambiance around the statue is serene and ethereal. You will need more than words to express the beauty and magical aura of the statue. It’s quite sublime.

The best time to visit Adi Shankaracharya Statue is in the summer months April to June. The weather will not be harsh for visiting Char Dham Shrines and witnessing the magnificent statue of Adi Shankaracharya behind Kedarnath Temple. Winter’s heavy snowfall makes it quite impossible to behold this statue and do Char Dham Yatra.

Now that you have got to know the significance and interesting facts about Adi Shankaracharya Statue at Kedarnath Dham Temple, make sure you do not miss to explore it properly along with the pious Kedarnath Temple while on your Char Dham Tour. It is because of the great saint Adi Shankaracharya we are able to behold the awe-inspiring Char Dham shrines of Uttarakhand.

Who built the new Adi Shankaracharya Statue behind Kedarnath Temple?

The statue of Adi Shankaracharya was built by Mysore sculptor Yogiraj Shilpi with 9 other sculptors and his son Arun.

What is the nearest airport and Railway Station to reach the Statue of Adi Shankaracharya at Kedarnath?

What is the weight and height of Adi Shankaracharya Statue?