Chardham Yatra 2023 Update: The Portals of Badrinath Temple Will Open on April 27th

Chardham Yatra 2023 Update: The portals of Badrinath Temple will open at 7:10 AM on April 27th, Badrinath-Kedarnath Authority announced yesterday. Badrinath Temple opening date for 2023 and time were decided as per the tradition at the Tehri royal palace on the auspicious day of Basant-Panchami at a religious ceremony held on January 26.

Badrinath Temple is situated in the Chamoli District of Uttarakhand that remains open in summer and closed in the winter due to heavy snowfall. It is a part of Chardham that consists of three other holy sites in Uttarakhand, such as Kedarnath, Gangotri and Yamunotri. Kedarnath Temple opening date 2023 will be announced on the auspicious day of Mahashivratri in February and expectedly, it will be around the same time as Badrinath Temple. As per tradition, Gangotri Temple and Yamunotri Temple will open on the day of Akshay Tritiya, April 22. So, the preparations can be started now for Badrinath Dham Yatra 2023 as the opening date is announced which is exactly after three months from today.

The holy pilgrimage tour of char dham is an important spiritual question for Hindu devotees. This quest is an integral part for the self-introspection and spiritual wisdom of a soul. Devotees from all across the globe indulge in Char Dham Yatra to get divine blessings of Almighty. The holy Char Dhams are the divine temple of Kedarnath, Badrinath, Gangotri and Yamunotri. Earlier due to covid Char Dham Yatra’s duration and the entry of devotees were very limited. But this year without any restrictions devotees can indulge in Char Dham Yatra and book their Char Dham Pilgrimage Tour 2023 hassle free.

About the Holy Char Dham Yatra of Uttarakhand Himalayas 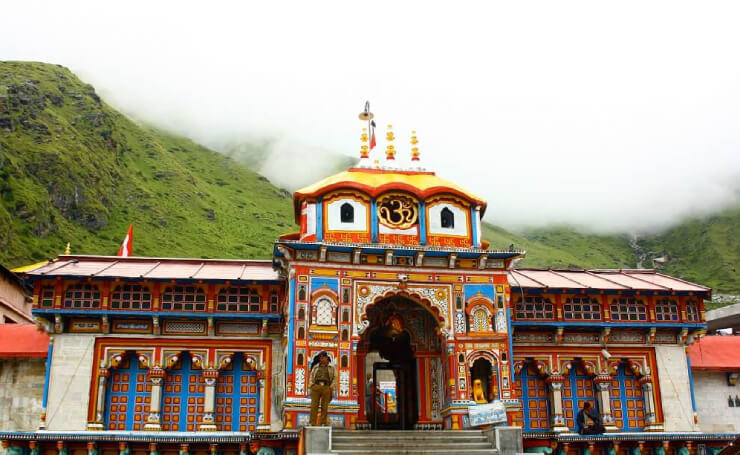 Amidst the natural splendors of Himalayan and Garhwal ranges of Uttarakhand lies the most important and popular religious pilgrimage centers for Hindu devotees – Yamunotri, Gangotri, Kedarnath and Badrinath. These four sacred destinations are known as Char Dhams which hold a great religious and spiritual value.

Devotees from all over the world come here to seek divine grace. Moreover, these Dhams have surreal and ethereal vibes. The concept of Moksha is highly believed in Hindu philosophy. Devotees who are seeking spiritual wisdom and divine grace must visit Char Dhams. Without visiting the Char Dhams, your transcendent quest would remain complete.  It is said that those who come here would be free from any sins and karmic backlogs. What adds to the sacredness of these Dhams is the pious Ganga River that flows through the four Dhams.

Not only the Char Dham Yatra offers unbroken vistas of surreal lofty peaks and picturesque landscapes but also the magnificent temples and sacred kunds would delight your eyes and senses. The Char Dham Yatra starts from Yamunotri then Gangotri, Kedarnath and then Badrinath. It needs to be done sequentially.

Yamunotri Dham – Yamunotri Dham is a pious pilgrimage destination for Hindu devotees in the great Himalayas. It is the origin point of the second sacred river of India – River Yamuna. It is said that taking a holy dip in river Yamuna would prevent untimely death of any person. Goddess Yamunotri is the presiding deity of Yamunotri Dham. Yamunotri Glacier, lush greenery all around, hot springs and lakes makes it one of the most popular tourist attractions of Uttarakhand.

Gangotri Dham – Dotted in high Garhwal Himalayas, Gangotri Dham is one of the divine destinations and Char Dhams which is an important pilgrimage place for Hindu devotees. It is the origin point of the most sacred river of India – River Ganga. The holy river of Ganga originates through Gangotri glacier. Goddess Ganga is the presiding deity of Gangotri Dham. It is also one of the best adventure destinations in Uttarakhand as Garhwal Himalayas is a great place for trekkers and mountaineers. The most popular trek here is Gangotri- Gaumukh Trek.

Kedarnath Dham- Decked in snow-capped Garhwal Himalayas and surrounded by the stunning alpine meadows, the holy Kedarnath Dham is one of the most important and popular pilgrimage destinations in Uttarakhand for Hindu devotees. Lord Shiva is the presiding deity of Kedarnath Temple Dham. It is the highest of the 12 jyotirlingas of Lord Shiva in India. Moreover, if you are a nature lover Kedarnath is a lovely place to be in due to the abundance of natural beauty in the form of a beautiful valley of Rhododendrons, pristine lakes and lofty mountains.

Badrinath Dham – Badrinath Dham is among the four pious Char Dhams of India. Lord Vishnu is the presiding deity of Badrinath Temple. Which is the center of attraction of this place. Nestled between Nar and Narayana Mountain ranges it is one of the most stunning destinations to visit in Uttarakhand. Devotees from all around the globe come to seek divine blessings and complete their spiritual quest. Gorgeous lakes, sacred peaks, lofty mountains and ponds makes Badrinath a must visit destination in Uttarakhand.

Popular Places to Visit in and around Char Dhams

If you were waiting to seek the divine grace of the most pious destinations of India – Char Dhams then this is the right time for you to plan your Charm Dham Yatra Tour. Being the most divine destinations of India, these Dhams and its surroundings offer the most scenic vistas to the tourists and devotees which is a visual treat for their eyes and soul. The vibes here are surreal and ethereal as the crispy mountain air and the uncharted terrains of Uttarakhand offers many adventure sports for the thrill and excitement toad in your spiritual journey. It is indeed a best destination to visit in India.

There is a limitation in the number of devotees per day to visit the holy Char Dhams. So, you need to book your tour online in advance. For all your bookings you don’t need to worry as you can contact TourMyIndia in planning and booking your Char Dham Yatra Tour package.

Q.What are the Covid guidelines to follow for Char Dham Yatra?

Tips for winter holidays in India –

Char Dham Yatra is famous because it is the most pious destination for Hindu Devotees. This Yatra is mandatory as without doing this yatra one would not be able to fulfill his or her transcendent quest. It is said that if you visit Char Dhams you will be free from any kind of Karmic backlog.

Q.What are the most popular divine destinations to visit in and around Char Dhams?

Tips for winter holidays in India –