Some Lesser-Known Facts About the Ethereal Kedarnath Temple

Let’s go to a place where divinity is in the air.

Have you ever been to a place where unblinking celestials dwell, where air feeds on the calmness since the time immortal? If not, you should visit Kedarnath Dham once. Kedarnath Temple, the sacred Dham of Lord Shiva is one of the most integral parts of Uttarakhand Char Dham Yatra.

Every year devotees from around the world come to Uttarakhand in the pursuit to attain Moksha or feel the spiritual bliss. It is one of the most difficult Yatra and spiritual pursuits when it comes to Hindu pilgrimage sites darshan.

Kedarnath Yatra is a yatra to discover God and become one with him. It is believed that Kedarnath is a place where wishes are granted and karmas are purified. Set in the background of Himalayan mountains in Garhwal range near the meandering Mandakini river, Kedarnath Temple has many stories of its origin and history. 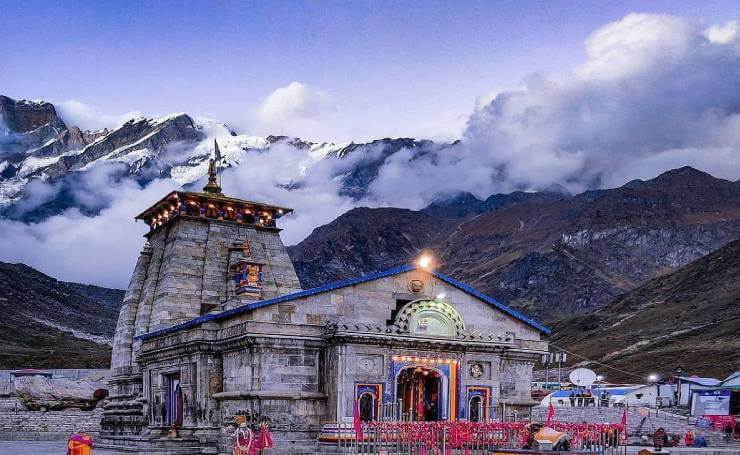 Today, we will unveil some of the most amazing and interesting facts about Kedarnath temple that are lesser known.

The lord himself protects the temple

The Kedarnath temple is protected by Lord Shiva. In 2013 intense rains of monsoon caused floods and landslides, resulting in the destruction of the entire surroundings of Kedarnath. Many locals and devotees died that year due to the devastation of nature but the temple of Kedarnath remained intact as if some divine power was protecting it from destruction.

People who witnessed this said that a massive boulder was blocking the rear portion of the mandir because of which the water and debris changed their course and the Kedarnath Mandir was saved.

The entire greetings scenario changes when you visit Kedarnath. Everywhere you will be able to listen to Jai Kedar or Jai shree Kedar. It is a way of greeting people when you are doing Kedarnath Yatra. Normal greetings like hii, hello is very rare to listen to.  The aura of Kedarnath is such that it seems, apart from the temple premises Lord Shiva is present outside the temple in people’s mind, in the form of greetings. Isn’t this one of the most interesting facts about Kedarnath.

The connection of Udak Kund with Kedarnath Temple

Udak Kund is located at the south of Kedarnath Mandir. It is of great spiritual significance for the devotees. The water of Udak Kund is poured on Lord Shiva of Kedarnath Mandir. It is believed that if someone drinks the holy water of Udak Kund before his death, that person will be free forever from the karmic circle of birth and death.  It is one of the most amazing facts about Kedarnath Temple as water holds the most important spiritual value in the Himalayas. It is in Kedarnath where mother Ganga descended. Water has a very liberating power to heal people from bad karmas. The water of the Himalayas purifies the soul.

The most interesting fact is that these purohits consider them as the descendants of the original group of 360 purohit families. They carry the family names of Purohit, shukla, sharma, katiyal, vajpai etc.

The head priest of Kedarnath belongs to the Vaishnava community of Raval but does not perform any pooja in the temple by himself. He instructs his assistants to perform religious rituals. During winters he moves with the deity of Kedarnath in Ukhimath. 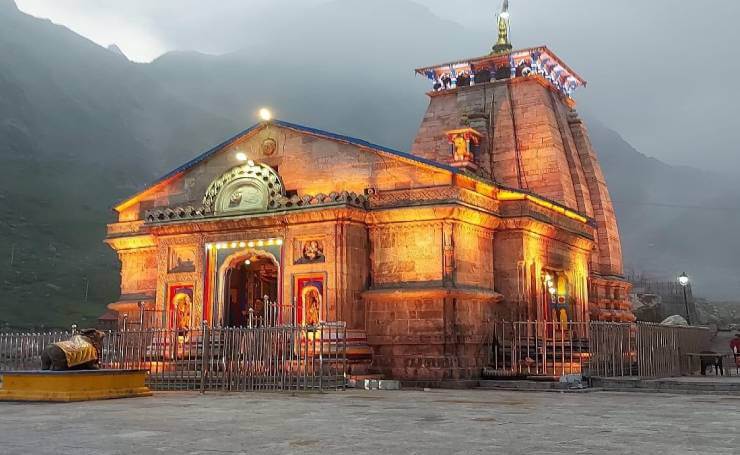 How do people view Kedarnath in Garhwal?

People of Garhwal view kedarnath in different light. The Shiv Lingam is not actually a form of buffalo but it is a swayambhu (self-manifest) Jyotirlinga (a form of light) which is already here from the time unknown. The god is formless according to the locals.

It is said that Pandava after the war of Mahabharata felt guilty of killing their relatives and wanted to get rid of their sins. In the pursuit of forgiveness, they asked Lord Shiva to forgive their sins but Lord Shiva continued to hide from them.

Making their pursuit of forgiveness difficult. When pandavas reach Kedarnath where the temple of kedarnath is located today, they could not find Lord Shiva as Lord Shiva was hidden on the ground, only his lump was visible.

One of the pandavas Bhim drove the buffalo out of the ground and the moment he drove the buffalo, it merged with the Linga that was there. Lord Shiva appeared in front of Pandavas and forgave their sins. In this way the lingam of Kedarnath was formed and it is in the form of a mountain rock which looks like a pyramid.

Another important fact about Kedarnath temple in Mythology

In Myths, according to Rudra Samhita, Nar and Narayan the two brothers who were the incarnation of Lord Vishnu undertook severe penance for 1000 years in one leg, in the village of Bhadrika by creating a Shiv Ling. Lord Shiva was pleased with their devotion and asked them to make a wish. Nar and Narayan asked him to make this place divine with his presence. From then Lord Shiva started living there as Lord Kedar.

Ghee holds a very important place in the temple of Kedarnath. Devotees rub the lingam with ghee which is considered auspicious. Pouring ghee into the lingam is a sacred ritual. It is for sure that this unknown fact about Kedarnath Temple made you curious to know more about the temple.

The linga is also considered a form of Himalaya Mountain. People of Garhwal also consider the lingam a mountain in which they live as Lord Shiva lived in the mountain and formed from a mountain emerging from the ground in a triangular shape. 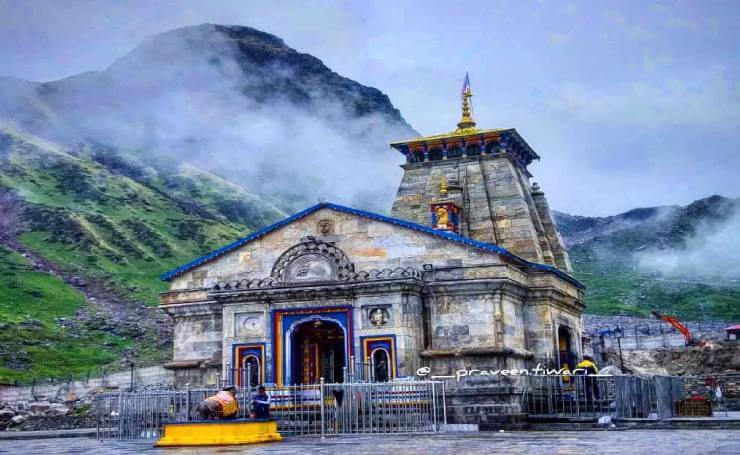 The architecture of Kedarnath Temple is equally divine like the shrine of Lord Shiva. The temple is 1000 years old and made of giant stone slabs on a rectangular platform. The temple was established by Adi Shankaracharya in the 8th century. There are inscriptions written in Pali language on the steps of the sanctum sanctorum of the shrine of Kedarnath which is an addition to one of the most amazing facts about Kedarnath Mandir.

Behind the Kedarnath Temple, there is a grave of the founder of four sacred dhams of India -Adi Shankaracharya. He attained nirvana at age 32. It is said that he merged with the land of Kedarnath and became one with God forever. He also established a math and a hot spring to provide relief from the extreme weather conditions in the area.  Isn’t it an amazing piece of information to add to your list of the most important facts about Kedarnath Temple?

The weather of Kedarnath keeps on changing and with it the experience of people about Kedarnath. Sometimes it snows and hails, sometimes it is just fog and precipitation, sometimes sunshine blesses the environment. It is said that taking a bath is important before entering any religious place but the weather conditions of Kedarnath are very extreme. Most people cannot take bath due to this reason and they prefer to go by the local idea of Garhwal region – ‘Hawa Snan’. It is very popular in Kedarnath. It is believed that the environment of kedarnath is enough to not take a bath. The air will purify your soul, such is the religious power of Kedarnath’s air. It is the most lesser-known fact about Kedarnath Dham.

Rudra Gufa/ Cave is often called as Dhayan Kutiya. It is located near the KedarnathTemple. It was built by Garhwal Mandal Vikas Nigam (GMVN). Kedarnath Cave is solely built for the purpose of meditation.

In order to avoid distraction from the outer world there is no internet connection in the Kedarnath cave but it has one bed and bathroom with proper electricity. PM Modi meditated in this cave in May 2019, since then this cave has been renamed as Modi Cave. You have to bring your own robe for peaceful meditation.

In order to truly enjoy the fountain of divinity, the path of nirvana and the winds of heaven which flow in every corner, the visit to Kedarnath would be a lifetime experience. We hope that our list of lesser-known facts about Kedarnath Temple has blown your heart away.

Q.What are the popular tourist attractions in and around Kedarnath?

Some of the popular tourist attractions in and around Kedarnath are –

Q.What is the cost of staying in Rudra Gufa for Meditation?

The cost per person for staying at Rudra Gufa for meditation is INR-990/- Per person.

Q.What is the best time to reach Kedarnath Dham?

Q.Is it safe to travel to Kedarnath?

By Air - Jolly Grant Airport at Dehradun is the nearest airport to reach Kedarnath. Daily flights from Delhi to Jolly Grant are available.

By Train - Haridwar Junction is the nearest Railway Station, it is well connected with the major cities like Delhi, Mumbai, Lucknow, Kolkata etc.

By Road- To reach Kedarnath one canopy for car rental service at Gaurikund.

Q.How to reach Kedarnath from Delhi?

To reach Kedarnath from Delhi, you can reach Gaurikund. From Gaurikund you can take private cars and buses to reach Haridwar, Rishikesh and Dehradun.