A Comprehensible Guide to the Famous Sabarmati Ashram in Ahmedabad

“The Ashram exists in our hearts as much as it does on the bank of the Sabarmati.” ~ Mahatma Gandhi

In the heart of Ahmedabad, is nestled probably the humblest dwelling of one of the greatest men on earth. Sabarmati Ashram is just not a place to walk back in time to take a peek in the life of Mahatma Gandhi, but it is a destination for introspection as well. Seated in the most graceful manner as it can on the bank of serene Sabarmati River, this must-see place in India has intriguing tales to impart from the life of an inspiring man. 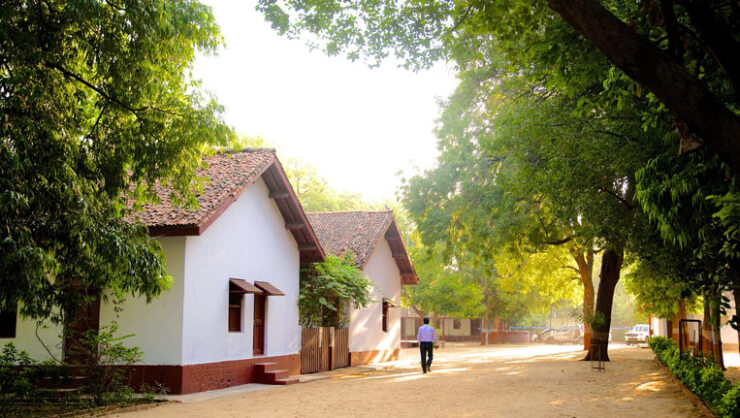 Some odd 3 km from where I was staying at the Ashram Road in Ahmedabad, was the Sabarmati Ashram, and there is no brownie point for guessing which place I chose to explore first on my Ahmedabad tour.

Have you been to some place/s where you feel a dramatic change in the air? I am talking of air becoming lighter and a sense of serendipity. Sabarmati Ashram fills you with this vibe as soon as you step on the premises.

There is this warmth in the air of Sabarmati Ashram which is indeed quite inviting – it gives you a feeling of finally making it to home. 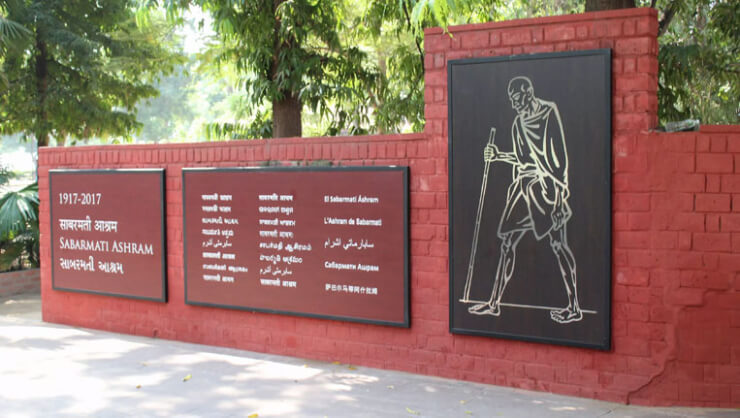 After entering the premises, the black shiny stone on the right-hand greets you with the image of Mahatma Gandhi followed by the map and some information on the Ashram.

On the left-hand side at a short distance, an inviting porch leads to the Museum, the Library, and the Exhibition Area, and that’s where almost every visitor begins his tour of Sabarmati Ashram. 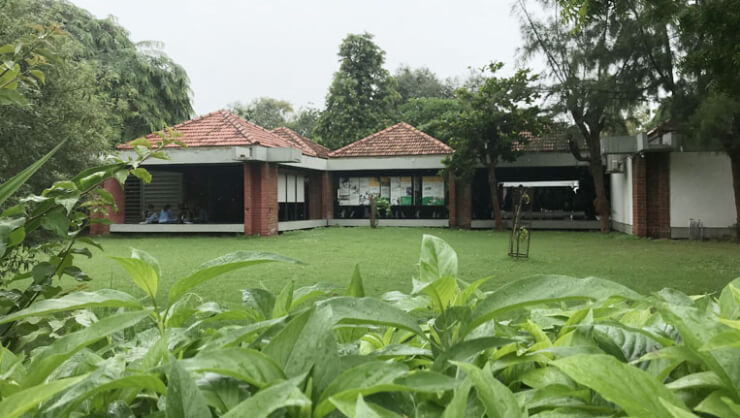 The Museum and the Library at Sabarmati Ashram are the newer inclusions by architect Charles Correa, who ensured to match the look of these new buildings with the rest of the Ashram by using brick piers, stone floors, and red tiled roofs.

A large door opens on the right-hand side on the porch where the sign reads ‘Begin your tour from here;’ a photo gallery called Gandhi in Ahmedabad opens to a wide hall which has pictures, models, and information on the life of Mahatma Gandhi in Ahmedabad.

It included a representational model of the popular Dandi March that was initiated by him while residing in this Ashram. A detailed insight into Gandhiji’s life in the city can be traced through pictures with descriptions.

My Life is My Message Gallery 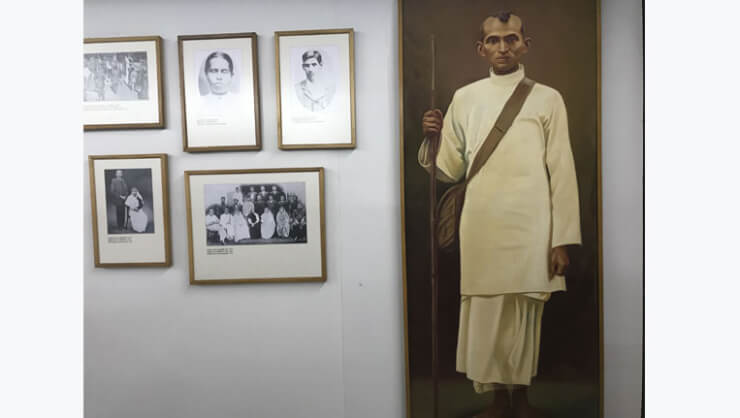 Few steps towards the left of the porch bring one to a whiteboard, which reads My Life is My Message with the signature of Mahatma Gandhi, and for anyone relishing the tour inside the Ashram, this quote gives rise to the goosebumps.

No exaggeration. I stood for almost 5 minutes gazing at the board, trying to soak in the words and the motivation and feelings behind them. Once you have got enough of this quote, an extensive photo gallery with 250 pictures of Mahatma Gandhi welcomes you.

Arranged chronologically, beginning from his birth to the tragic assassination, this photo gallery gives you a fair idea of the journey of Mahatma Gandhi from a young man in Porbandar and Rajkot to the Father of the Nation. 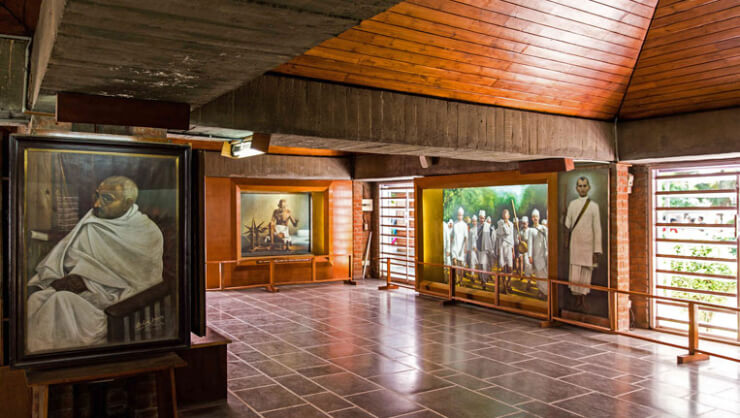 Apart from these two sections, there is a Painting Gallery which houses 8 pictures of Gandhiji in different poses. These portraits were painted by Chandulal Shah and Hiralal Khatri who were textile merchants and skilled artists in 1960s.

There is a Library that has an extensive collection of letters; manuscripts of Mahatma Gandhi’s articles published in Navajivan, Young India and Harijan; films in Hindi, Gujarati and English depicting Gandhi’s life and mission, video and audio cassettes; eulogiums offered to Gandhiji; felicitations written on palm leaves; a collection of postal stamps, diaries of Gandhi and some of his colleagues; rare books on India’s Freedom Movement and that of his personal secretary Mahadev Desai’s; along with photo negatives.

Exiting the gate of the Library, you feel so full of life and knowledge, something inside you just changes significantly, and you can’t figure out what, but whatever it is, it truly makes your heart feels light in the strangest of ways. In the porch area, you can witness the pictures of eminent personalities including Bernard Shaw and Albert Einstein with quotations on Gandhi. 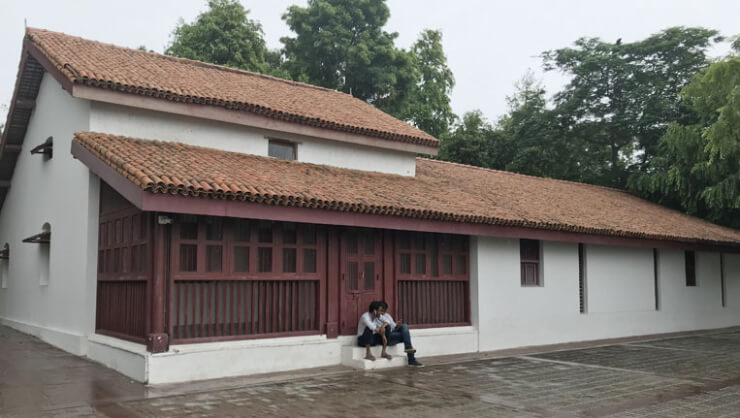 Leave the porch from the backside of the building and you’d encounter another humble building called Magan Niwas, which was once the residence of Gandhiji’s nephew and one of the most significant persons in his life, Maganlal Gandhi. A modest house, it has now been converted into a Charkha exhibition Hall, since Maganlal introduced different upgraded designs of the spinning wheel.

Gandhiji called Maganlal ‘the Soul of the Ashram’ and one would learn why when they read about his contribution. One can see Charkhas or a variety of shapes and sizes in this residence-turned-exhibition hall including the one used by Kamalammagaru to spin the finest yarn in 1924. 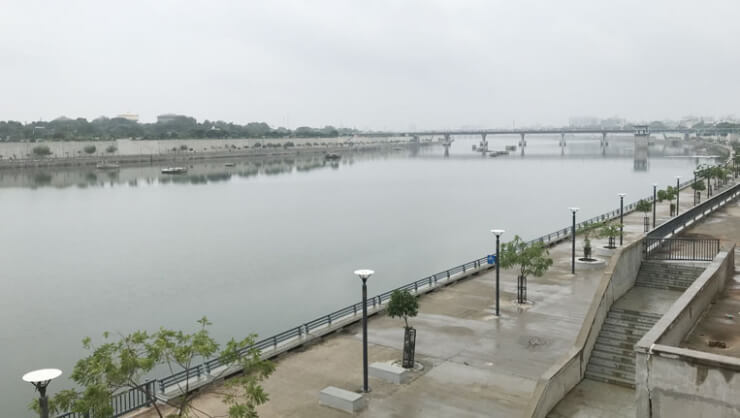 A large patio outside connects to a flight of stairs, a few meters away from which flows the famed Sabarmati River in all its elegance. Few benches on the top stair allure you to sit for a while, contemplate or maybe soak in the ultimate peace. And I suggest to fall for this allurement; watch people take pictures, enjoy the view of the river and that of the surroundings – here once walked one of the greatest men on earth.

As long as you want, recommended time is 15 minutes though. 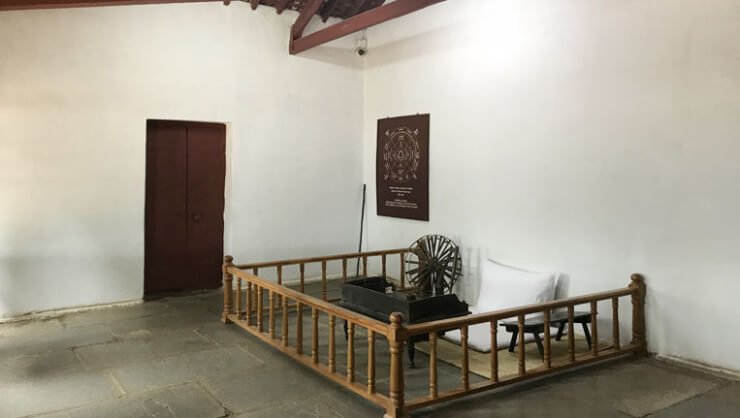 Once you have made up your mind to explore the remaining Ashram, you can head towards the closely situated Hriday kunj. Named by Kakasaheb Kalelkar, Hriday kunj is where Gandhiji lived with his equally impressive life partner, Kasturba Gandhi between 1918 and 1930. This residence is what you would address as the most humble dwelling any eminent personality can choose to live.

Comprising of there are 6 small sized rooms with a traditional courtyard in the centre, the house is capable of humbling your thoughts as well. The first room on the left was used by Mahatma Gandhi and a Charkha and a writing desk is placed. The room is closed for the general public to enter but there is a small opening made in the door for visitors to take pictures and to have an unobstructed view of the room.

The room of Kasturba Gandhi has empty with just one picture hung on the wall. The kitchen is also almost empty with fewer and humble household utensils to see and the courtyard gives a really nice feel of the olden days. 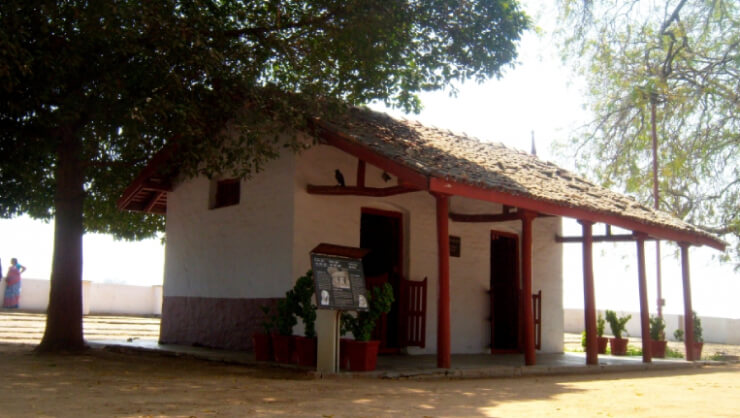 Few steps away on the opposite side of Hriday kunj stands another humble residence of Madeleine Slade, the daughter of a British rear-admiral, who moved to India and became involved in the country’s freedom struggle.

Mirabehn was the name Gandhiji gave her and she joined him in the Ashram activities and lived here from 1925 to 1933. Prior to this, whom Gandhiji called the model of Satyagraha Movement – Vinoba Bhave resided in this house between 1918 and 1921.

It is a small house with two rooms and a washroom and a kitchen that reflects the humble lifestyle of these notable personalities as well. 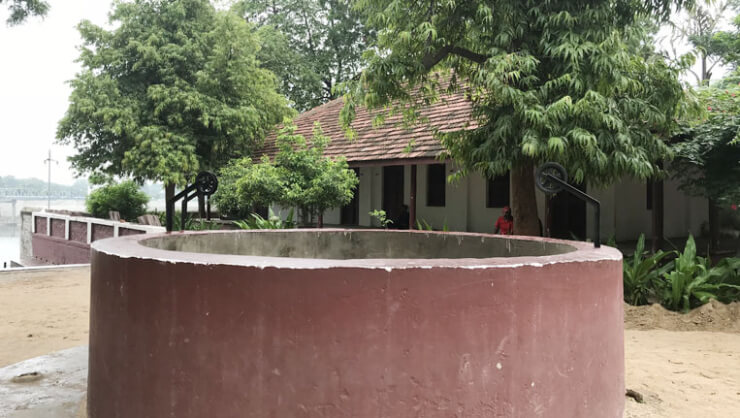 A large house on the right-hand side of Vinoba-Mira Kutir can be seen. The large size itself give you a feel of it being a guest house, and that’s exactly what it was. This house is known to host several national leaders and famous personalities like Rabindranath Tagore, Pandit Jawaharlal Nehru, Dr. Rajendra Prasad, Reginald Reynolds, ‘Deenbandhu’ C.F. Andrews, Henry Polak as well as Maulana Abul Kalam Azad.

Note: Nandini is not open to the public.

Other Prominent Buildings on the Premises 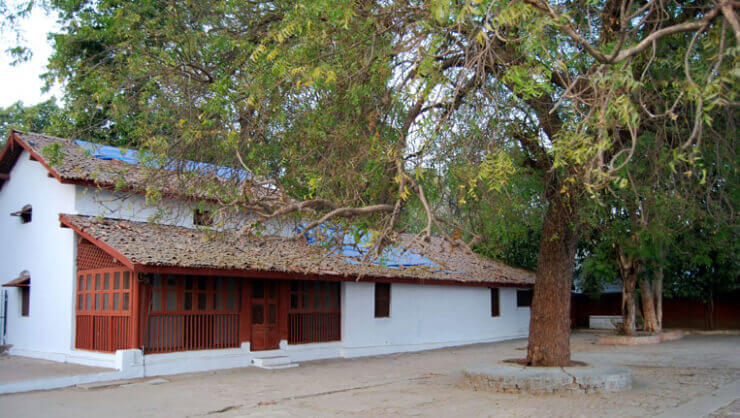 Apart from these, the Ashram premises comprises of Udyog Mandir (Temple of Industry), which was founded by Gandhiji in 1918. It reflected the self-reliance and dignity of the labour who were part of the historic mill strike in Ahmedabad.

It was from here the message of ‘Freedom through Khadi’ was spread. The temple is also closed for public viewing. Another important building here is that of Somnath Chhatralaya, which is a large building of around 100 rooms used as community living quarters.

Upasana Mandir is yet another significant spot in the Ashram where congregational prayers used to take place every morning and evening. Gandhiji gave discourses on Bhagavad Gita during these soulful praying times.

“If, on weighing the merits of this Ashram against its drawbacks, it is found wanting, the world has a right and duty to say that I have lived my life in vain as I have attempted to put my whole soul into it,”” Gandhiji wrote this in 1920s, in reply to some allegations and criticisms against the Ashram. A great man spent the most humble life and became an inspiration, and this Ashram is his legacy that he invested his time and energy into.

As I walked out of the Sabarmati Ashram, something inside me changed forever, something that is still motivating me to be content in life. I just hope, when you visit Sabarmati Ashram, you feel the same way too, because if you do, then the dedication this eminent persona showed towards this Ashram will not go waste.

Sabarmati Ashram is situated on Ashram Road in Ahmedabad, Gujarat.

Q.What is the best way to reach Sabarmati Ashram?

Auto Rickshaws and cabs are readily available from all parts of Ahmedabad city for Sabarmati Ashram.

Q.How much time does it take to explore Sabarmati Ashram?

Q.What are the major attractions of Sabarmati Ashram?

The major attractions of Sabarmati Ashram are: