Girnar Ropeway in Gujarat which has become Asia’s longest ropeway has recently been inaugurated by the Prime Minister of India, himself. The ropeway has been constructed on Mount Girnar in Junagadh District, which is a major tourist attraction in Gujarat because of the presence of pilgrimage sites such as Amba Temple, the Dattatreya Shrine, and many other Hindu templesas well as several Jain temples. Here’s all that you need to know about this soon to become a popular attraction which will make your Gujarat temple tour easy and quick.

A little background on Girnar Ropeway 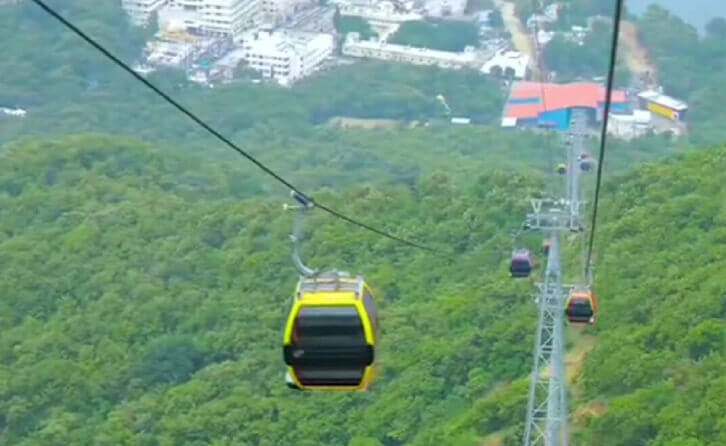 The Girnar Ropeway project was first proposed by the Tourism Corporation of Gujarat Limited (TCGL) back in 1983 but the construction started only in September 2018 due to government approval delays and litigation.

What is the Girnar Ropeway All About?

To book an online ticket for the Girnar Cable car, visit its website www.Udankhatola.com. The ticket prices for Girnar Ropeway are ₹400 (one-way) and ₹700 (two-way). For children between 5 and 10 years of age, the fare is ₹350.

What is Girnar Ropeway Timings?

The timings of Girnar Cable Car ride is between 8 am and 5 pm.

Now that you have all the information you require about Girnar Ropeway, we’re sure you are as excited as us to plan your trip to Gujarat and experience a ride in this Asia’s longest ropeway. So, book your tour to Gujarat with our best holiday packages and make the most of your vacation when in this western state of India by visiting Mount Girnar.

Girnar Ropeway, which is Asia’s longest ropeway, has been recognized as the “Best Unique Tourism Attraction of Gujarat” at the Tourism Awards 2020, held in Gift City. More than 2 lakh passengers have enjoyed a ride on the ropeway since its inauguration on 24th October by Narendra Modi.

Q.What is the length of Girnar Ropeway?

Q.What is the ticket price for Girnar Ropeway?

The Girnar Ropeway is located on Mount Girnar in Junagadh district of Gujarat.

Q.What are the attractions of Mount Girnar?

Q.How many passengers can Girnar Cable Car carry at a time?

The Girnar Cable Car can carry 8 people at a time.