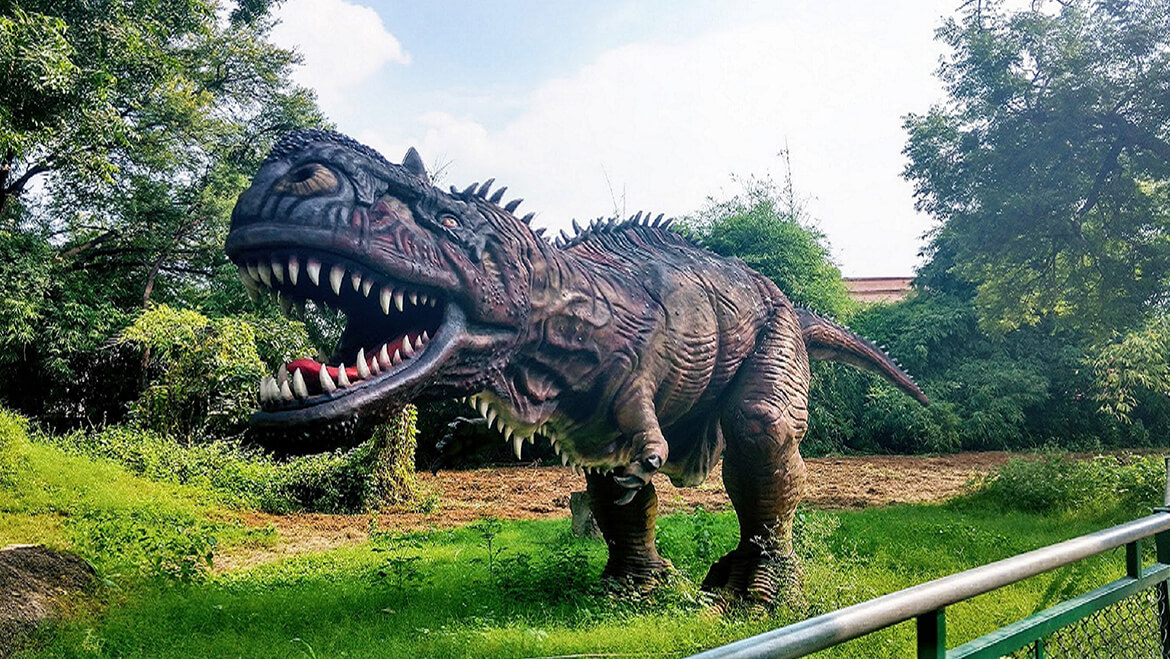 There are many things which go into making Gujarat one of the top tourist attractions in India and a famous travel destination. From the city of Ahmedabad, declared a UNESCO World Heritage City to the Rann of Kutch, the largest salt desert which hosts the Rann of Kutch Festival, Gujarat tourism fascinates you in many ways. Another way in which it will fascinate you now is through the newly inaugurated Jurassic Park in Gujarat which is situated in the village of Rayoli in the district of Balasinor. It holds the honour of being the first such dinosaur museum in Gujarat and India, and the third park of its kind in the world.

We have all been regaled and fascinated by stories of dinosaurs since childhood through books, comics and movies. The movie Jurassic Park certainly played an enormous role in greatly increasing the interest of the public towards these gigantic creatures who walked the earth at one point in time. Everything about them is interesting, from their enormous size to the way they disappeared from the face of the earth. Now, you can visit this dinosaur-museum-cum-park in Rayoli and learn more about them through a variety of exhibits and shows.

Features of the Dinosaur Museum Park 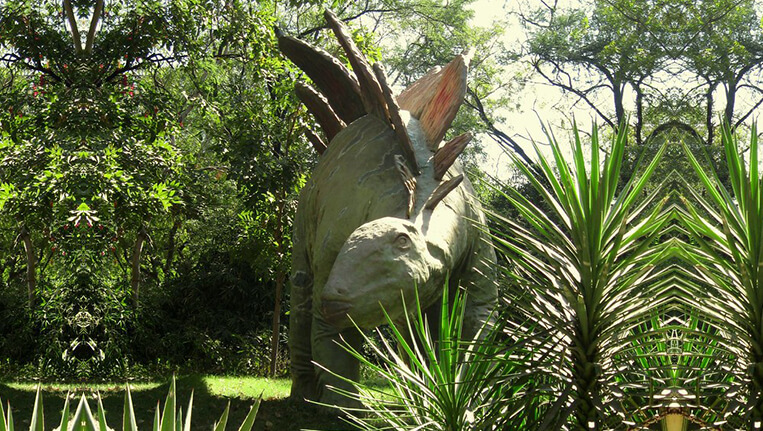 The newly inaugurated Dinosaur Museum cum Park is spread over an area of almost 25,000 sq. ft. The layout of the park and the theme make it a kid’s friendly attraction and of the must visit museums in Gujarat. It consists of 10 galleries in the basement and the ground floor which depict the history, evolution and characteristics of dinosaurs through a variety of displays including films and exhibitions. In addition, visitors are also shown a 3d movie on the Rajasaurus Narmadensis (a species of dinosaurs belonging to the late cretaceous period of India. It is believed to have measured almost 22ft and inhabited the region of what is today known as Narmada River Valley).

The Endangered Species of India: Look Beyond Rhinos, Tigers and Elephants

Other Features of the Museum 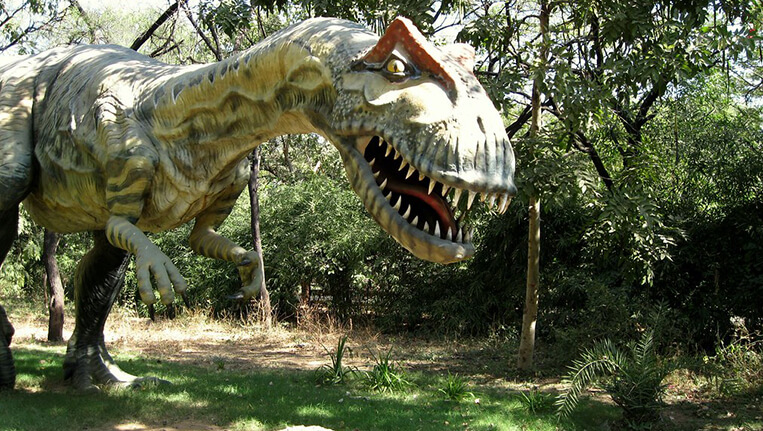 The museum also houses other galleries which contains exhibits on dinosaurs of India and Gujarat, fossil exhibits and other displays which promise to arouse your interest immensely. Visitors will particularly be interested by the enormous sculpture of Rajasaurus Narmadensis (the first half of its name comes after its crested horn while the second half of it is named after the geographical location which was located in close proximity to Narmada) along with a beautiful display depicting the evolution of the earth. Apart from this structure, there are as many as 40 other sculptures which show the size, shape, habits and habitat of the dinosaurs to the visitors.

Visit to the Most Beautiful Gardens in India

Other Interesting Facts About the Museum 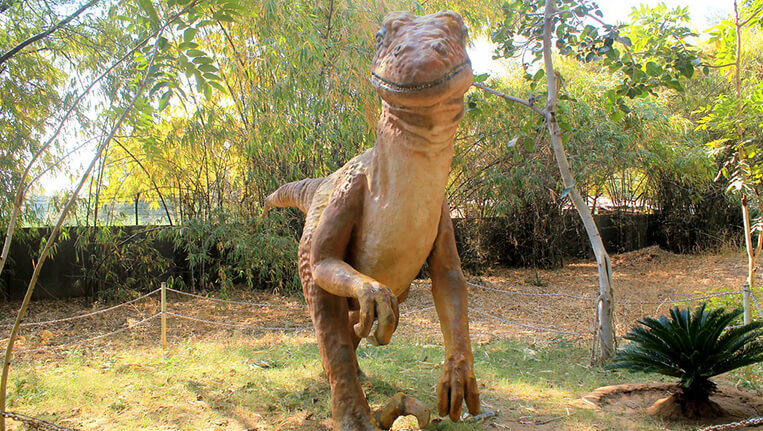 There is also a Fossil Park Development Society inside the museum. The appeal of the museum is sought to be extended to kids by creating a Dino Fun area for Kids. The special highlight of this area is the atrium which features an exact replica of these creatures. No sooner do you enter it, than you get the feeling of having a world 65 millions years old. Speaking on the occasion, Mr Rupani, the Gujarat Chief Minister said, “All efforts will be made to promote the site internationally for tourism purpose”.

Gujarat: The Land of Dinosaurs! 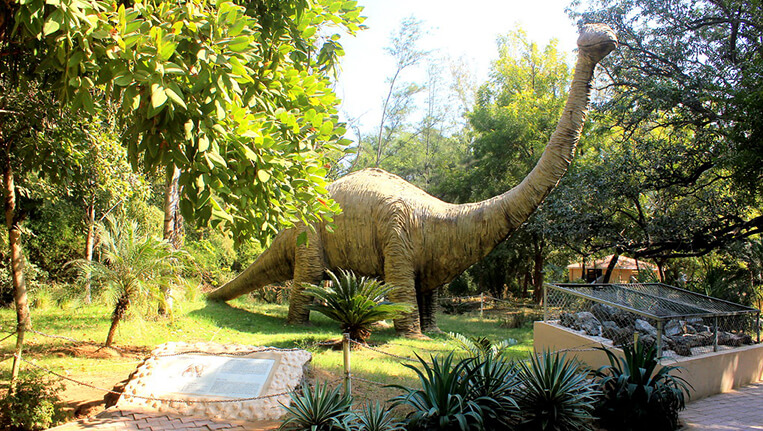 Gujarat is one of the few states in India which was home to dinosaurs in the pre-historic times. Today, the entire area is rich in fossilised remains of dinosaurs. While visiting Gujarat, you should not forget to visit the Indroda Dinosaur and Fossil Park, the second largest hatchery of dinosaur eggs in the world and a famous tourist spot. The park, which is spread over an area of almost 428 hectares, is divided into various sections like dinosaur section, fossil section etc.

According to various palaeontologists, the dinosaur eggs found here are more than 65 million years old. One of the famous discoveries made here was that of a large, heavy bodied dinosaur named Rajasaurus Narmadensis, or the King of Narmada. The fossil park is one of the best places to visit with kids because it provides an interesting insight into the history of dinosaurs in Gujarat. The fossil park also houses an Informatics Center at Balasinor which consists of a time machine, 5-D theatre, 3-D film, an elaborate display of mesozoic times and a souvenir shop, besides other things.