Gurudwara Shri Hemkund Sahib is a heavenly abode of Guru Gobind Singh Ji, the 10th guru of Sikhs. It is one of the most revered pilgrimage sites of Sikh community. located in the Chamoli district of Uttarakhand, is one of the most important pilgrimage destinations for Sikhs in India. Located at an altitude of 15,000 feet, this holy shrine stands on the banks of Lake Lokpal, and is overlooked by seven Himalayan Mountain peaks. Each mountain peak has a Nishan Sahib (Sikh triangular flag) on its cliff.

Tourists and devotees are always bewitched by the stunning location of Garhwal Himalayas and ethereal vibes of this place. Surrounded between the lofty peaks of Hemkund Parvat, this Gurudwara looks divine in its surroundings. It is named after Hemkund Parvat which means ‘lake of snow’. Shri Hemkund Sahib is also revered by Hindus, as it finds mention in the Ramayana. Every year numerous devotees come here to get divine blessings from Gobind Singh Ji. The scenic lake in the gurdwara has a great spiritual significance for the devotees. The Gurdwara closes in the winter season in the months of October and April.

Hemkund Sahib Yatra commences from May and continues till October every year. The Hemkund Yatra opening date for 2022 is 22 May. 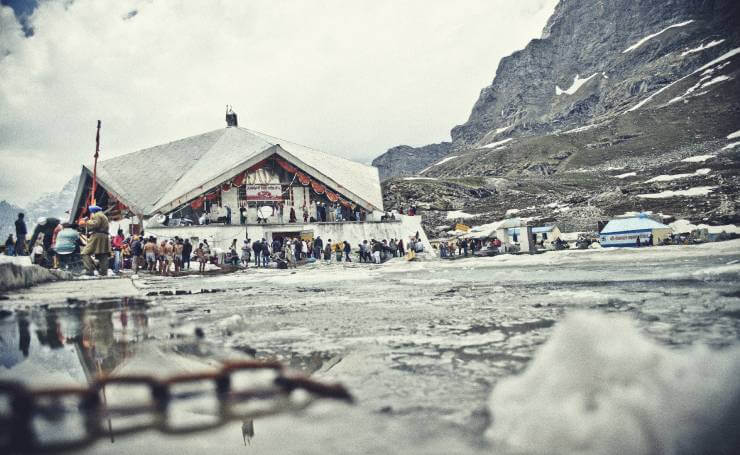 Hemkund Sahib Yatra in Himalayas is accorded the highest respect by Sikhs, and is an important pilgrimage destination for them. It is believed by followers of Sikhism that Shri Guru Gobind Singh, the tenth and last Guru of the Sikhs, meditated here in his previous life for 10 years. Shri Hemkund Sahib was first mentioned in the Dasam Granth, written by Shri Guru Gobind Singh. It contained his thoughts, and the future of Sikhism in general. However, the search for this holy shrine began only in the 19th century. It was finally traced in 1884 by Pandit Tara Singh Narotam. Much of the credit for the building of this shrine and its popularity goes to Bhai Vir Singh, a renowned Sikh scholar.

Hemkund Sahib Gurudwara is also held in the highest respect by the Hindus because it finds mention several times in both the Ramayana and Mahabharata. In fact, it is believed that Lord Laxmana, brother of Lord Ram, meditated at this site along with Rishi Medhasa (he is mentioned in the Markandeya Purana as Rishi of Durga Saptashathi). A temple of Lord Laxmana nearby Hemkund Sahib is also visited by the devotees during Hemkund Sahib Tour. 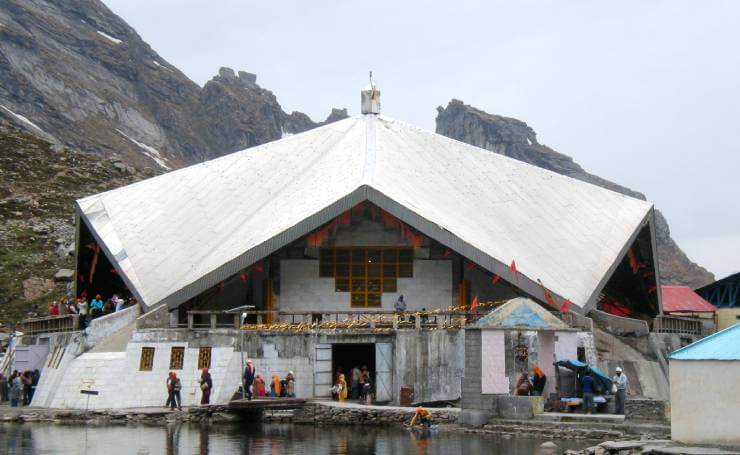 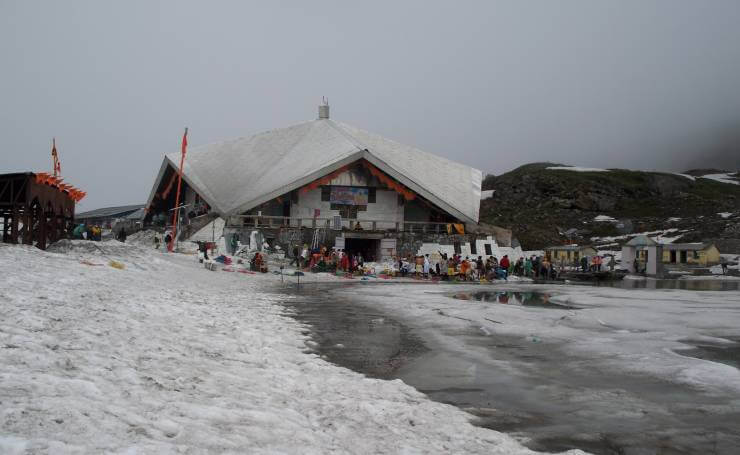 Trek to Hemkund Sahib Gurudwara will open in front of you alluring sights of Garhwal Himalayas. It begins at Govindghat after crossing the sacred Alaknanda River on a hanging bridge. The trail will take you to the terraced fields and vegetation. You will also see the sacred joining of Laxman Ganga into Alaknanda.

The snow-clad peaks of mighty Himalayas will also seduce your senses. Cascading waterfalls, cold water springs on the way to Pulna and Bhyundar village are worth capturing sights and sceneries. The rhododendron flowers will rejuvenate your spirit. You will pass through Ghangaria which is a base camp for trekking to the valley of flowers and Hemkund Sahib.

How to Reach Hemkund? 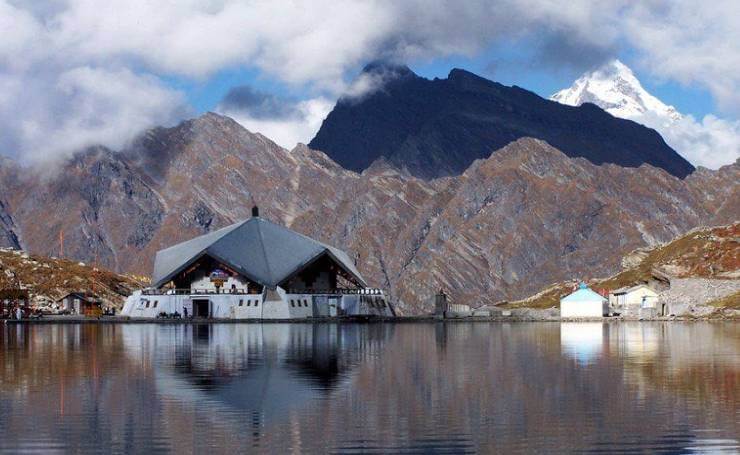 Although one can reach Govindghat by air, rail and road, ultimately, one will have to trek for about 19 kilometers to reach Shri Hemkund Sahib. Those who find the trek too arduous can always avail the helicopter service.

The best time to visit Hemkund Sahib is from May to June as the weather is very pleasant for the trek and September to Mid-October. You will behold wonderful snowfall during that time.

Popular Tourist Attractions to Visit in and around Hemkund Sahib Gurudwara 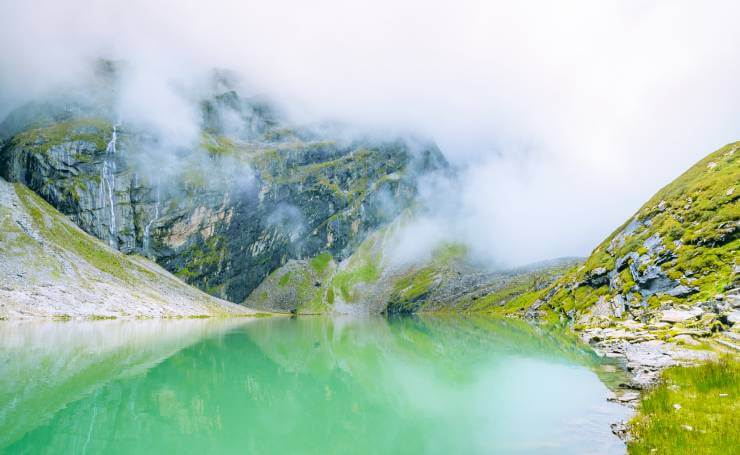 One must not miss the sacred abode of temples and the yoga capital of Uttarakhand Rishikesh. It is not very close to Hemkund Sahib but also not very far from it. The evening Aarti of Ganga and temple tour of ethereal abodes of the almighty along with relaxing and rejuvenating your soul in math and ashrams are one-of-a-kind experiences which is unforgettable. It is also one of the best places to try water adventure sports such as river rafting.

One must behold and drink the serene nectar of spiritual wisdom in Hemkund Sahib Gurudwara once in a lifetime. The ambiance and the vibes have the potential to change the mind and soul completely.

What is the opening date for the Hemkund Sahib Gurudwara Tour 2022?

The opening date of Hemkund Sahib Gurudwara Tour for 2022 is 22 May. It usually starts from May and continues till October.

What is the trekking distance of Hemkund Sahib which starts from Govind Ghat?

The trekking distance for Hemkund Sahib is 19 km from Govind Ghat.

What is the nearest airport to Hemkund Sahib Gurudwara?

Nearest airport to Hemkund Sahib Gurudwara is Jolly Grant airport in Dehradun which is 292 km away and the nearest Railway station is in Rishikesh which is 273 kms.

How many days are required to do Hemkund Sahib Darshan?

You need approx. three days for it. You have to trek 19 km to reach Hemkund Sahib. It's possible to do the darshan in one day but you will be very tired so it is recommended for you to have at least three days for darshan as well as sightseeing.