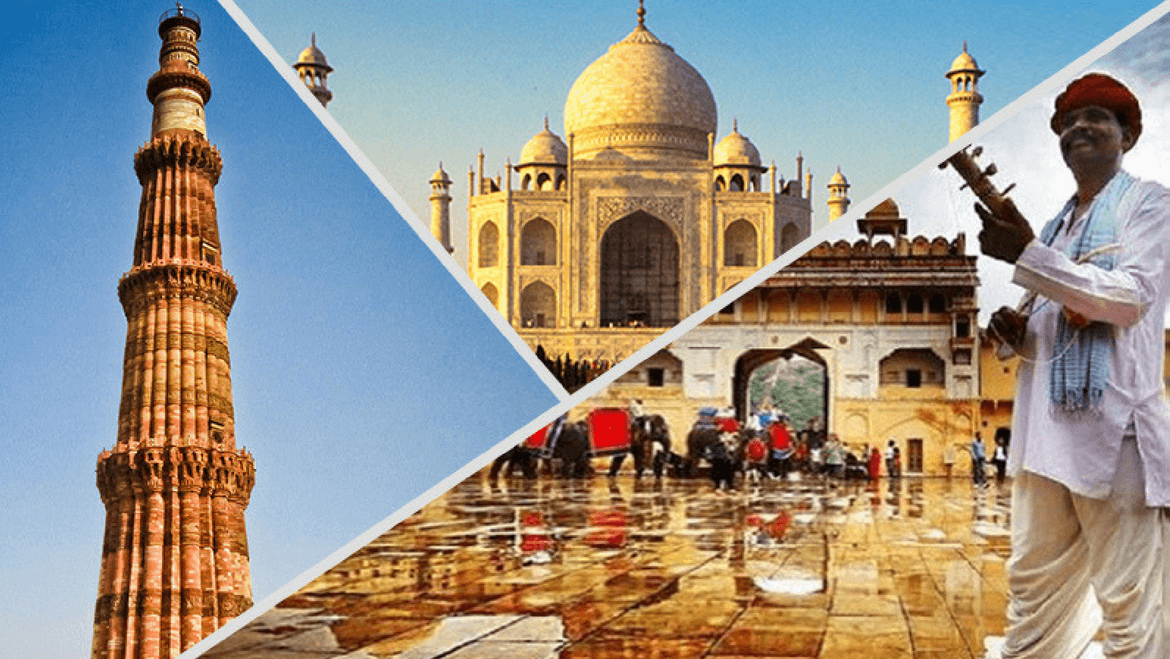 Traveling has definitely got a universal soft spot but the itinerary is subjective. However when the destinations you have fixed gift you a bouquet of a book of knowledge about the spices of our culture, the sweet harmony of our religious doctrines and some wonderful pieces of architectures, the choice of places becomes objective. One such tour can be the most popular Golden Triangle India along with Khajurao Temples Tour. It is so called as golden triangle for the geographic region it covers -Delhi, Agra and Jaipur – forms a triangle. The term “golden” is used in the phrase because the places cover multiple hues of our culture, our beliefs, food and a wide range of length and breadth of historically relevant architectures. The Khajurao temples are dedicated to two groups-Hinduism and Jainism hinting at a mingling of culture and mutual respect for each other. All the temples exhibit exotic sculptures, mostly comprising of erotic postures. A traveler would like to have a mixed bag of memories and with that as his priority the discussed itinerary would be apt.

To start with, Delhi is not just a metropolitan and not just the proud land of the Parliament, but it was the erstwhile hub of the Mughals and the architectures of the latter are scattered every where in the city. Some noteworthy monuments include the Red Fort, Jama Masjid, and India Gate.

The unique feature of this place is all the locations are more or less easily accessible by one mode of conveyance that is metro railways. Shopping is fun in Delhi, from large malls to the gallis, the pavements and more. Delhi is one such place in our country where fashion takes off early and to make it easier you get nice attires and shoes at affordable ranges. The fashion street, called Sarojini Nagar is perennially thronged by shopaholics. Chandni Chowk is a conglomerate of stuffs ranging from daily used items like spices and utensils to luxuries like gold and precious stones. In food you get the expensive and elite restaurants of Connaught Place and the yummy ghee soaked parathas and non veg, no less tasty yet cheap in many a nook and corner.

The next point of pausing is where the Rajas and Ranis resided, every small house (almost) is a palace or a part of, where royalty breeds in every corner; the place ravaged by extreme heat and biting cold, Jaipur or the capital of Rajasthan is what completes the triangle. Jaipur unfurls a carpet full of colourful palaces, temples, unique jewellery, beautiful dolls made of unique cloth and found only in Rajasthan. A traveler will discover that Jaipur is the embodiment of the rich culture of our country. Amber Fort provides a tourist some awesome minute architectures of glass. There are some wonderful paintings. The other attractions include the majestic and mysterious Hawa Mahal and Jal Mahal.

A trip to Jaipur is incomplete without gulping a plate full of the authentic Rajasthani thali, which comprises of items like”aamaurchanne ki “achar”, “aam ki launji”, “alooaurkaddu ki sabji”, “aloopethe ki saag”, “amlamurubba”, ”amlana”, ”bajra roti” and the list continues. The taste bud of a food connosieur would dance to the tunes of the spicy “mirchpakodas” too. The ”meena“ jewellery of Jaipur and the “baadni” print on sarees and dupattas of women are very attractive.

Popular Forts and Palaces in Rajasthan

What more assets does a place need apart from being the soil holding one of the Seven Wonders of the World, the Taj Mahal. This edifice of love is the best haunt in India and is always subjected to the vision of lakhs of eyes every day. The lustre of the white marble reflects the nobility for which it was built. Emperor Shajahan made his love to Mumtaz immortal in this tomb. No traveler would be able to stop appreciating the fine intricate designs of the building. The view of the sun setting at the Yamuna behind the Taj Mahal is ethereal and imparts a more romantic hue to the wonder of the world. Other places worth visiting in Agra include the Agra Fort and Fatehpur Sikhri. Agra will offer a traveler some finger licking sweets like Dalmoth and Petha. The sticky jalebis will overpower their influence on your diabetic concerned appetite. One also gets to taste some authetictandooris and kebabs.

Popular Places and Attractions to Visit near Taj Mahal

The Chandela Rajputs had built the temples of Khajurao… all framing with intricate work. The Khajuraho temple complex was mainly built during 950 and 1050 AD. These temples are mostly dedicated to two groups…Hinduism and Jainism hinting at a mingling of culture and mutual respect for each other.

Built of sandstone and granite, and camouflaged …showing hair strands of hair and even manicured nails meticulously.

The Eastern Group: It has five temples in the heart of the city and comprises Jain temples. The Parsavanatha temple is the biggest one and the architecture reflects day to day activities in details. The Ghanti and Adinath Temples are dedicated to Jainism as well. There are breathtaking wall paintings of Adinath temple that will blow one off with the awe of how centuries behind such art form existed. The Ghanti temple depicts the 16 dreams of Mahavira’s mother. The Brahma temple characterized by four lingams and the Vamana temple with their sensuous apsarasare captivating. Both these temples are dedicated to Hinduisim.

The Southern Group: The Duladeo tempe is dedicated to Lord Shiva and the sculpture of the sensuous Apsaras make the temple more appealing. The main highlight of this group is the huge and sublime statue of Lord Vishnu.

After saturating oneself with the beautiful temples ,a traveler can pick up some memoirs of this place and gift them to their near and dear ones who missed visiting the place.. One gets to shop embroidered kurtas and colorful dupattas, Khajurao is a home to a lot of talented craffstmen who create replicas of the exotic sculptures of the temples and those are favorites to many. Rajinagar is a zone of brassware and silver. A little bit of bargaining can make a first time tourist, a gainer. Jewelley items like junk and funky necklaces are also noteworthy .The Chandela Emporium sells authentic Khajurao items.

A journey to one’s dream destination is definitely mirthful but the way one travels and covers most of the regions in a compact tour can be innovative and exciting. A seven day package for the trio (Delhi-Agra-Jaipur) and the amorous Khajurao can be a good deal. The first two days can be spent exploring Delhi, for it is vast and has something or else to see in almost everywhere. From Delhi, a private car takes four hours, a bus takes five hours to reach Agra and the train called Taj Express can also be availed. If a traveler plans to visit Agra during a full moon day, it will be no wonder better, for he will get to have a majestic views of the moon lit Taj Mahal. One day stay would be required to get the enough of Agra . From Agra an hour’s journey by train lands a tourist at Jaipur where two days are needed for exploring the mahals, the food and the ethnicities of this place. Travel for another hours and one reaches Khajurao,the wonderful city of temples painted with sculptures that not just deserve our attention but admiration too.

At the end out of this planned trip, some unplanned tricks should be left to situation that will spice up the journey. The most strange part of this trip will be-it will leave a trail a insatiability ,as the traveler will be so near yet so far from the golden sand of the deserts of Rajasthan, the beckoning wildlife of the forests of Madhya Pradesh and the less famous mausoleums’ of Delhi and Agra, but never mind for they say,

“Better be late than never”