Manali: An escape to life!

Mention Manali and the next thing your mind pictures are the adventures the resort town offers. Have we all perceived the town the right way? What we fail to explore is a part of Manali that features remote panoramas, sky touching deodar forests, glistening lakes and endless pastures. The hill town in Himachal Pradesh is undoubtedly one of the most visited tourist destinations in India, but let’s travel it the right way!

Tour My India takes you on a journey to some of the best tourist attractions & places to visit in Manali: 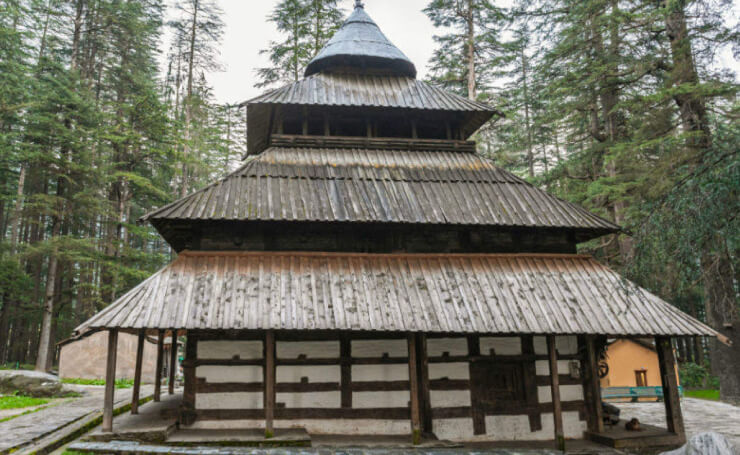 Also known as Dhungri Temple, the Hadimba Temple brings the epic, Mahabharata to life. Dedicated to Hidimba Devi, one of the wives of the Pandava Prince Bhima, the temple is nestled among tall deodar trees.

The temple is built in pagoda style and its sanctum is a cave shrine believed to house the actual footprints of the deity. The temple without any doubt is one of the best places to visit in Manali with the snow-clad Himalayas in the backdrop. 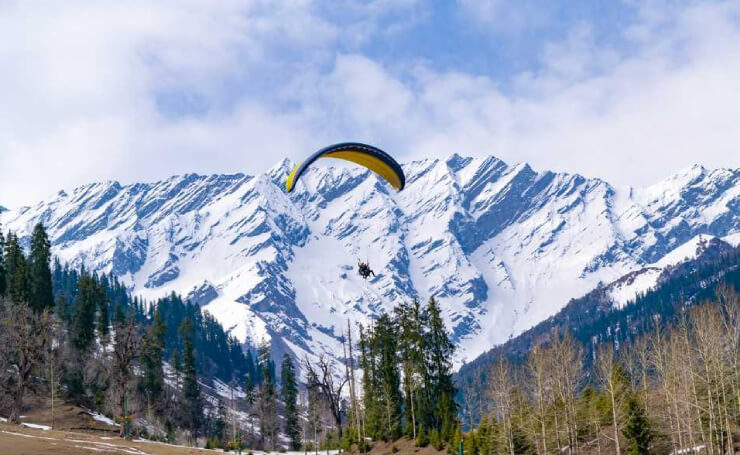 An open valley of meadows, cobalt blue skies and spectacular vistas is the most popular tourist attraction in Manali. Solang Valley is a great melange of nature surrounded by the heavenly ranges of Himalayas.

The valley bustles with tourists all year round. During summers, tourists enjoy adventure activities such as paragliding, zorbing, camping, rock climbing and gondola ride among others while in winters, the valley turns into a snow territory with exciting snow sports such as skiing and snowboarding.

Various state and national level ski-championships are also organised in the valley every year. 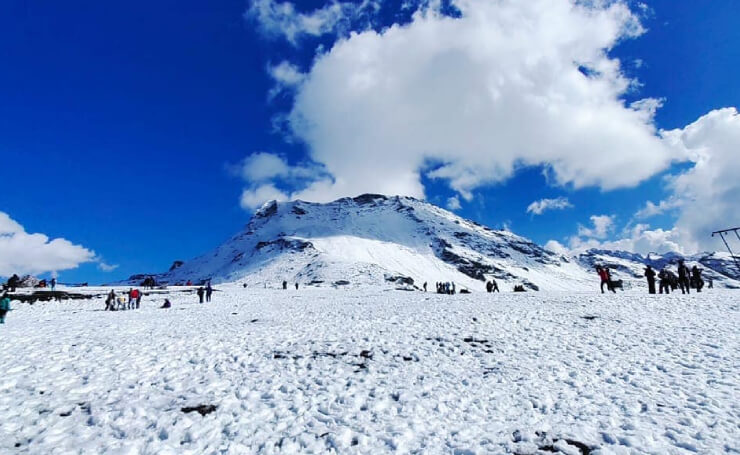 On a winding mountain road, located on the Pir Panjal Range is the most touted tourist attraction of Manali, Rohtang Pass. A personal favourite of all nature lovers, artists and photographers the pass offers access to Lahaul and Spiti in summers.

Due to immense snowfall, the pass remains closed during winters from the month-end of November. Tourists can also enjoy thrilling adventures like skiing, paragliding and trekking here.

To protect the delicate beauty of the pass, alpine ecosystem and small creeks, the Government has restricted overcrowding of the destination by enforcing regulated access of tourists. While in Manali, you cannot afford to miss out on this tourist attraction at all! 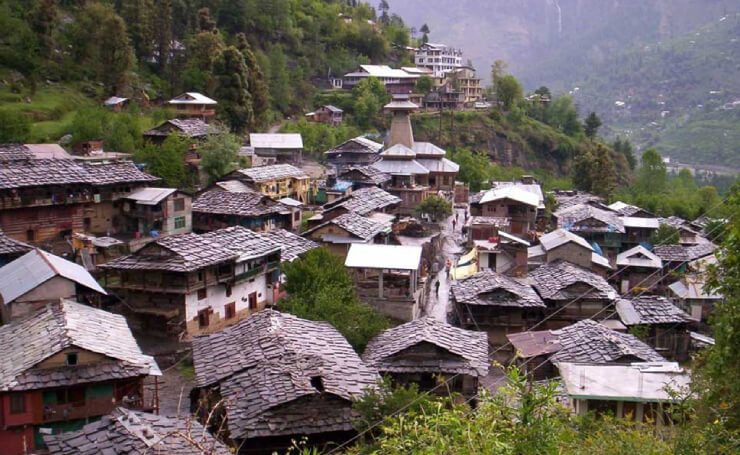 Old Manali is a land of the by-gone era when Manali used to be a quiet pilgrimage town before the travelers found it. The town offers quiet local settlements with old mountain houses surrounded by apple orchards with snow-clad mountains in the backdrop, an ideal setting for a dream summer holiday.

You can also find rustic temples, river-side cafes and small trekking trails to enjoy Manali as you should. The local markets sell hand-made products as souvenirs and life slows down in this part of the hill town only to let you breath and relax in the bliss of nature, i.e., Old Manali. 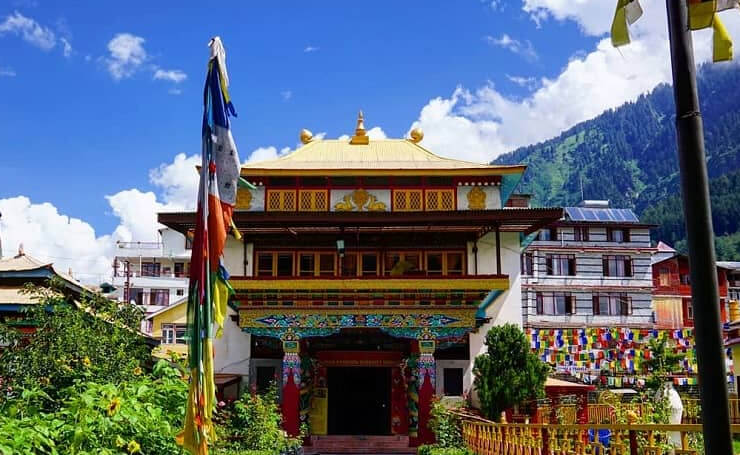 If you are searching for a place to fill you with spiritual bliss, Manali Gompa is where you need to be. Also known as the Gadhan Thekchhokling Gompa, this Buddhist monastery was built by the Tibetan refugees in 1960.

The exquisite architecture with the pagoda-style yellow roof and magnificent murals depicting the ethics of Buddhism make this Buddhist temple a top tourist attraction in Manali.

Travelers visit Manali Gompa to put their lives on a stand still and take in all the beauty and spirituality offered by the complex. The stalls in the premises sell unique Tibetan handicrafts and rugs as souvenirs.

Also Read: Top 5 Treks to Do in Himachal in Summer 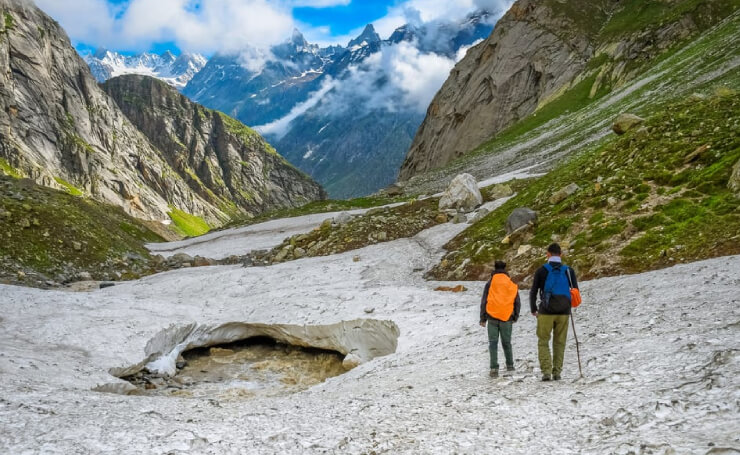 Hampta Pass is one of the most popular tourist attractions in Manali. Adventure junkies visit Manali to roll over and relish the challenging opportunities it throws amid their way.

Hampta Pass is located on the Pir Panjal Range and a trekker scales the maximum altitude of about 14000 feet on their trek to the pass. The pass has a journey of river crossings and lush-green meadows with pine and deodar forests.

The pass offers stunning views and is an unbeatable arena for nature lovers. The pass is a must-visit on your trip to Manali. 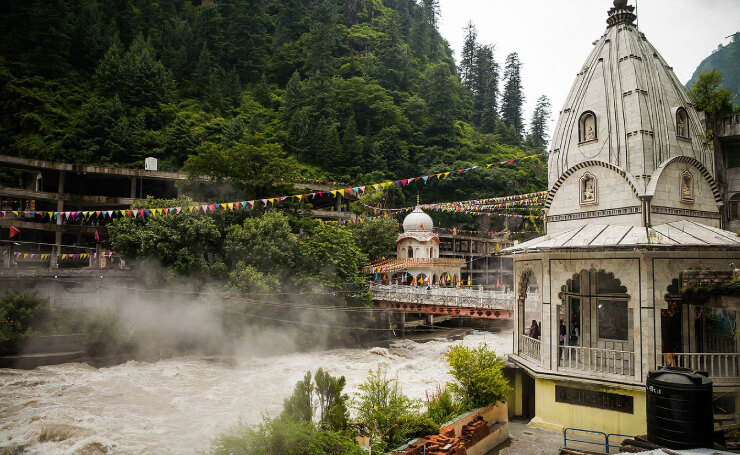 Manikaran, located in the Parvati Valley is a land where two different Gods live together making it a top tourist destination in Himachal Pradesh. A pilgrimage centre for both Hindus and Sikhs, Manikaran is where India’s religious diversity comes alive.

Located just 79.3 km away from Manali, the town houses the pious shrine of Sri Gurunanak Dev called Gurudwara Manikaran Sahib. According to the legend, while traveling amid the Himalayas Guru Nanak Dev’s disciples were hungry and there was no food. Guru Ji sent his friend, Bhai Mardana to collect food for the langar.

Many people donated food but the only problem was that there was no fire to cook food. Then, Guru Nanak Dev lifted a rock and a hot spring appeared from the place on which the food was cooked later.

Even till this date, the hot spring exists and the Sikhs cook food using the holy water. Thus, Manikaran is your escape to a spiritual experience filled with serenity and knowledge. 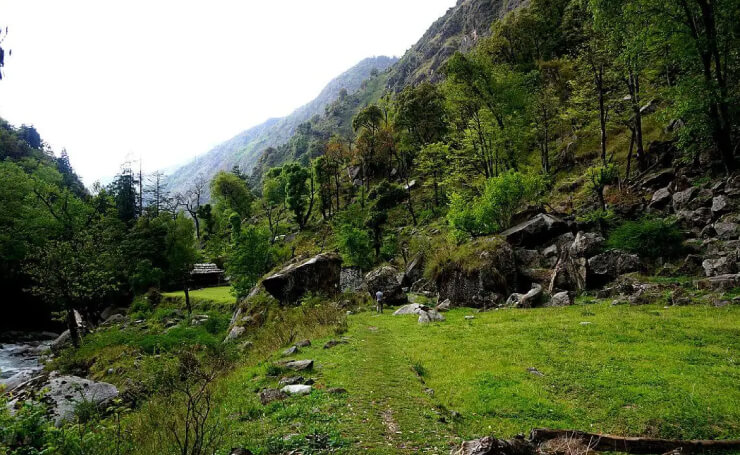 Famed as one of the best places to visit in Manali, the Great Himalayan National Park is a perfect spot for nature enthusiasts. The great alpine grasslands with dense pine and deodar forests hide wild creatures of the Himalayas.

The park itself houses some of the endangered species with 1000 plants, 209 species of birds and 31 species of mammals. Wildlife photographers relish in the wildflowers spotting shy and fierce creatures among them.

The ferocious snow leopard is the apex predator of the park. Tourists can indulge in hiking and camping in the allowed zones of the park. 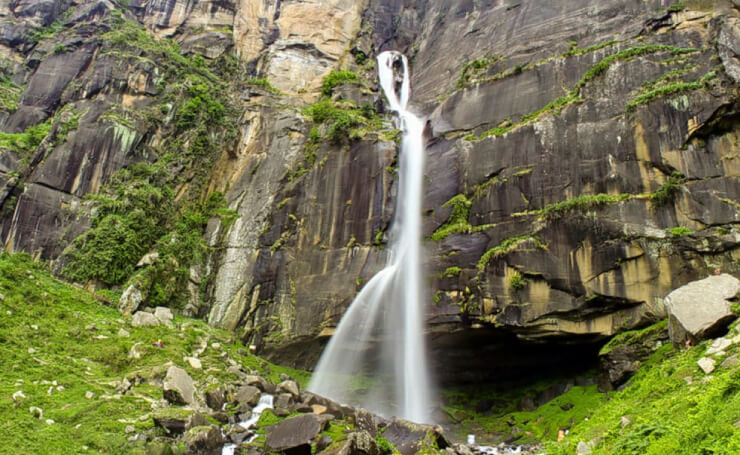 With many small shrines at the base of this waterfall, Jogini is considered sacred by the locals. The white cascading beauty on the rocks steal your heart at the very first sight.

If you are looking for a serene spot untouched by many, Jogini Falls is your paradise. Just 3 km from Manali city center, the falls offer a short trek through wild orchards, small creeks and pine woods making it one of the top things to do in Manali. 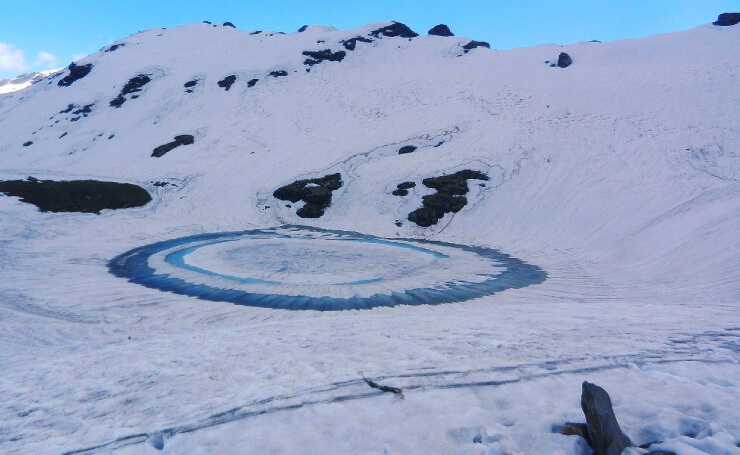 A gift of the Himalayas, Bhrigu Lake is located at the base of Bhrigu peak. It is one of the best trekking trails of Manali. The lake is surrounded by snow-clad peaks on all sides like in an attempt to protect it from the world.

According to local folklore, Maharishi Bhrigu, one of the seven great sages of Indian history used to meditate here. This is why the lake is rendered sacred and even when the temperature goes down to sub-zero, the lake never freezes completely.

The locals also believe that all the Gods and Goddesses from heaven come down to take a dip in this holy lake. Well, if not for the trek or the nature’s pristine beauty, you ought to visit it for its mysterious past!

Explore the roots of mankind while visiting the ancient Manu Temple with a great past. According to belief, an apocalypse in the form of a great flood attacked Earth. Then, Lord Vishnu took the Matsya avatar to warn Sage Vaivasvata Manu to save mankind.

Acting on his advice, sage Manu built a big ship enough to house his family, nine types of seeds and animals and birds to establish mankind after the apocalypse. It is believed that after the deluge, sage Manu meditated on the earth at the very place this temple is located. This temple is the only temple in the world dedicated to the great sage making it one of the most popular tourist attractions in Manali.

Manali is a gift of the Himalayas to the world and it would be a sin to miss out on all the beauty and adventures this resort town offers to the explorers. Head down to this blissful town and do not forget to explore and view all of the above tourist attractions to get in-depth with the history of Manali.

Q.What are the top summer activities for tourists in Manali?

Manali offers various adventure activities for tourists such as trekking, camping, paragliding, rock climbing, zorbing along with snow sports such as skiing, snowboarding and sledging among others.

Q.How to reach Manali from Delhi?

The best way to reach Manali from Delhi is by road. The distance between the two cities is 533.2 km. Various luxury and state buses operate from Delhi to provide easy accessibility to the travelers.

Q.What is the distance between Manali and Delhi?

The distance between Manali and Delhi is around 534 km.

Q.How many minimum days are required to explore the best of Manali?

Minimum 3-4 days are required to explore Manali in the best way possible.

Q.What are the best holiday packages offered by Tour My India for Manali?

Popular tour packages for Manali offered by Tour My India are:

Q.What are the important things to know before visiting Manali?

Some things to know before visiting Manali are:

Q.Can we see snow in summers in Manali?

Regions on the higher altitude of Manali have snow during the summer season.

Sheetal is a passionate traveler of paths less travelled. If curiosity to see places was a person, it would have been her for sure. Impromptu plans run her life. She only has one motive in life, i.e., happily roaming the world. Get on board with her journey to a life filled with places, people and magic!