11 Ancient Temples in Palakkad That Deserves to Be Seen

A sheer heaven on earth, Palakkad is a verdant land enclosed by misty mountains and precious evergreen tropical forests, that house beautiful rivers, rare birds, and animals. This picturesque destination offers an easy escape from the scorching summer heat of Kerala. The dreamy land Palakkad has several historical monuments and pilgrimage travel destinations that offer tremendous hope to the city to become one of the most preferred tourist places in Kerala. The famous ancient temples here are surrounded by virgin hills and luxuriant valleys, attracting a lot of visitors from around the world. Here’s a list of temples that one must definitely visit during their spiritual journey to Kerala. 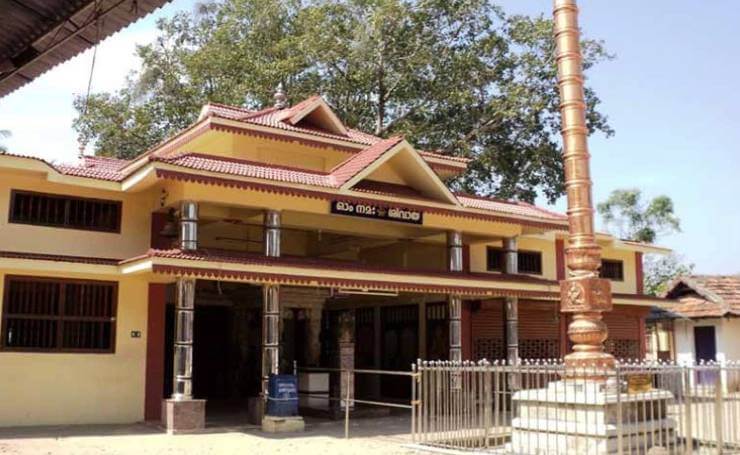 The people of Palakkad love to visit this magnificent temple, which is known for its unique architecture, and design. It organizes the famous chariot festival Kalpathy every year, which is witnessed by thousands of tourists from around the country. Not only this, Kalpathy has the distinction of being the only Heritage Village in Kerala, proposed as the UNESCO World Heritage Site in India. Upon visiting here, one can even plan a quick trip to Sri Visalakshi Sametha Sri Viswanatha Swamy temple to catch a glimpse into the life, culture, festivals and food of the famous Palakkad Brahmins. It is definitely one of the best places to visit in Palakkad.

This temple is around 3 KM away from Palakkad City at Kalpathy. One can simply walk up to this temple from the main city or take a private taxi, or hire an auto rickshaw or any public transport to reach here. 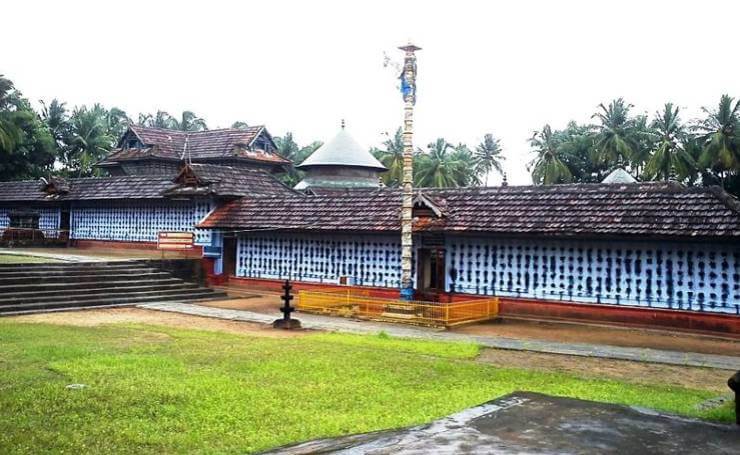 The Thiruvalathur Randu Moorthy temple is popular for its grand architecture and sculptures, that are believed to be very old and have been discovered by Parsurama. This beautiful temple is dedicated to two goddesses – the passionate Mahishasuramardhini and the peaceful Annapurnneswari. It is spread over a large area and is protected by huge stone walls, with four main entrances facing North, South, East, and West. Visitors can come here between 5.30 am to 9.30 am on Saturday and Sunday and between 5 pm to 8 pm on all other days. The temple host a festival on the final day of Vrischika every year between November and December, and that’s when the entire city comes to life.

Thiruvalathur is around 7 KM away from Palakkad City on the Chittoor Road and can be easily accessed by public or private transport. Tourists can take a direct bus to reach this spot. 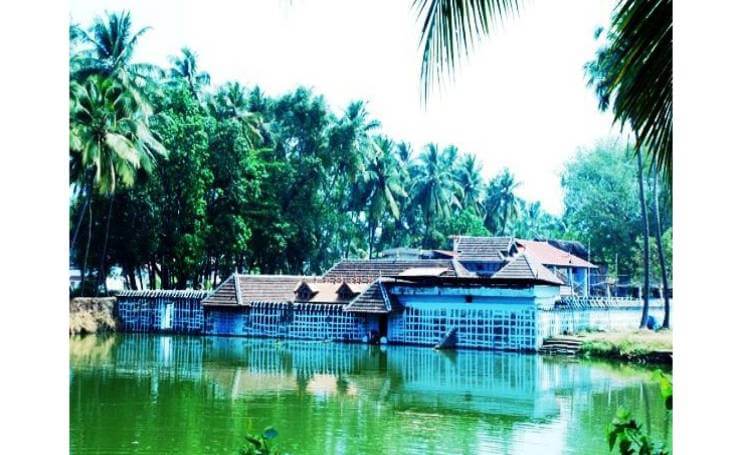 Also known as Hemambika Temple, this majestic structure has Goddess Hemambika as its chief deity, who is believed to have appeared in front of his devotee on the condition that her presence should not be disclosed to anyone. There is a legendary tale behind the name of the temple, according to which the idol worshipped here is an “upraised hand”. It is believed that Impressed by the prayers of her devotees, once the goddess Hemambika appear here, but when she saw a small crowd gathered here, she vanished immediately, and the people could only see her upraised hand. Since then, the temple is named as Sri Emoor Bhagavathy Temple and is counted among the most famous temples in Palakkad. Some people also say that the deity takes three forms in a day, i.e. of Saraswathi, Laxmi, Durga.

This beautiful temple is around 8 kms from the Palakkad City en route Malampuzha Dam. You can easily reach here using public or private transport. 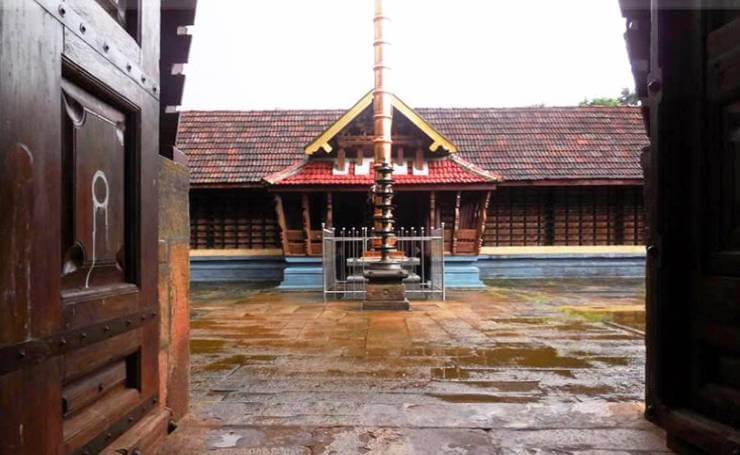 With Kunthipuzha river silently flowing on one side and lush green valleys of Palakkad spread on the other, the Karimpuzha Sree Ramaswamy Temple, is a place worth visiting. Situated in the Palakkad district, this temple has one of the rarest Sri Rama idols in India, which depicts the figure of ever sacrificing Lord Rama, who was seen on the shores of the Sarayu River before his ascent to heaven. It is believed that Lord Rama was accompanied by his ever-obedient companion Hanuman.

Around 36 KM away from Palakkad City is Sri Ramaswamy Temple, which is well connected with road to other nearby villages and towns. One can easily access this place by public or private transport. 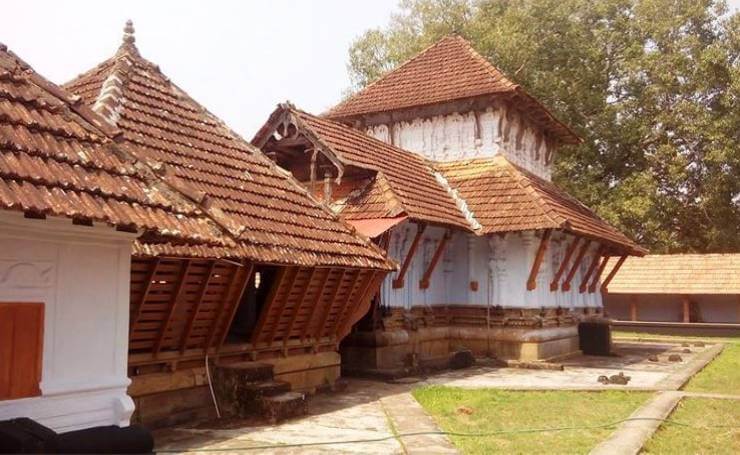 This is the oldest temples in Palakkad District India, which is believed to be the first ever temple consecrated by Parsurama around 4000 years ago. It is a popular tourist attraction in Palakkad, visited by hundreds of tourists every day. This majestic temple complex situated at Kumbidi, Palakkad District of Kerala, India. This Temple is believed to be the first temple in Kerala consecrated by Parsurama nearly 4000 years ago and it is one of the ancient Hindu temples in India.

This magnificent temple is located around 80 KM away from Palakkad City and on Thrithala – Kumbidi Road, Palakkad District. It is easily accessible through public and private transport. 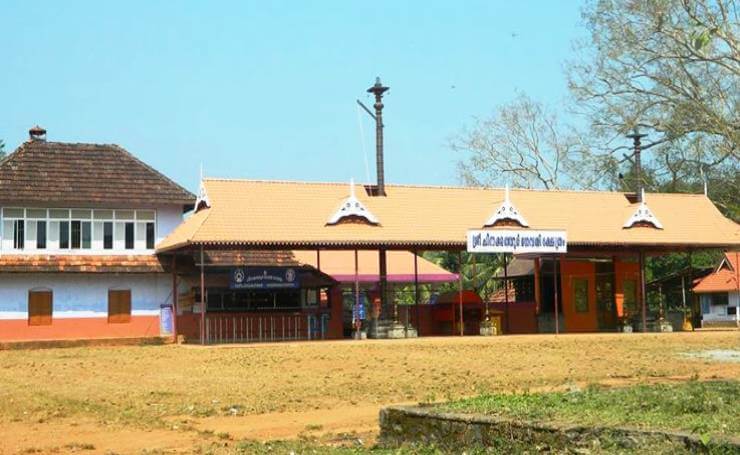 Sri Chinakkathoor Bhagavathy Temple is visited by a large number of people every day from all across the world and is located at Palappuram, which is around 5 km from Ottappalam, Palakkad in north Kerala. The temple is positioned in the center of a huge ground where the ‘Chinakkathoor Pooram’ festival is organized every year to pay respect to goddess Bhagvathy. Sri Chinakkathoor Temple has two shrines namely ‘Thazhekkavu’and ‘Melekkavu’, where the later shrine is known to be the upper one, which is believed to be older than the lower shrine, ‘Thazhekkavu’. The priests of these shrines come from traditional families of Kerala like ‘Kulangara Nair’ and ‘Namboothiri’.

This place is easily accessible from Palakkad City, which is only 40 km from here and is located near Ottapalam, Palakkad District. Regular bus service and taxi facilities make traveling easy. 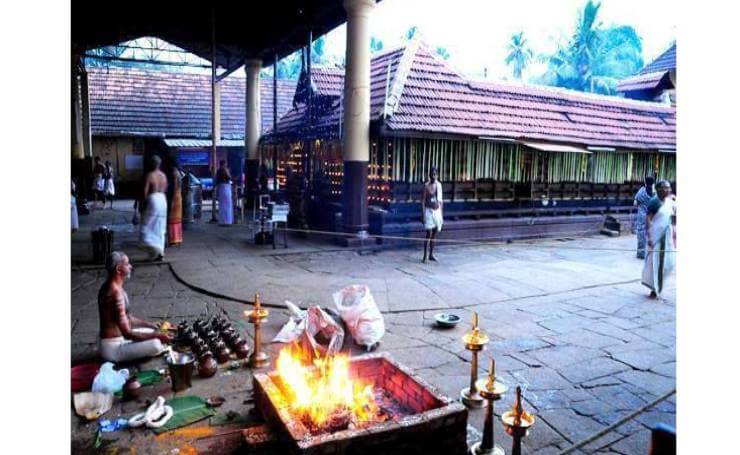 This ancient beauty is believed to be more than 1000 years old with great historical importance and is known to be a prime tourist attraction in Palakad. Also, known as Women’s Shabarimala / Malabar’s Shabarimala / Valluvanad’s Shabarimala, this temple is a very major Ayyapa Temple with main festivals like Mandala Pooja and Theeyattu. The main deities of this temple include God Ganapathy, Navagrahangal, Sree Brahma Rakshassu & Nagaraja. A large number of devotees gather at this temple during Sabarimala Pilgrim season from all over India.

This place is around 40 KM away from Palakkad City and is located in Cheruppulassery of Palakkad district. Tourists can take taxis, buses, or their personal vehicle to reach the spot. 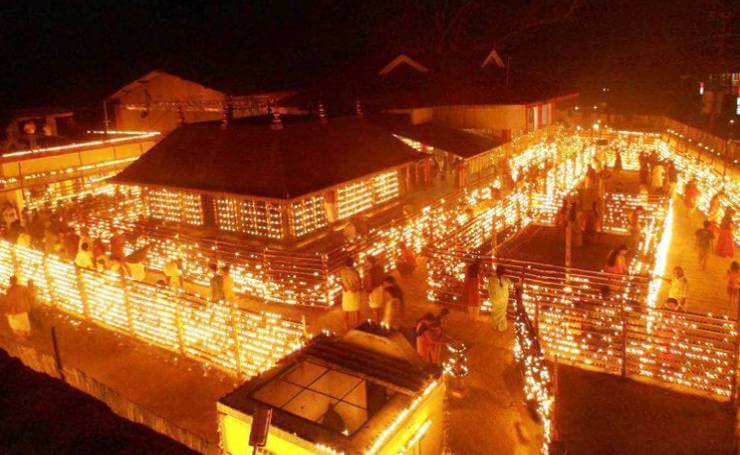 Puthur Sri Thirupuraikkal Bhagavathy Temple is one of the most beautifully constructed temples in Palakad and is of great importance in the life of locals. People considered it to be one of the ancient and most powerful temples of Shakthi in the entire Malabar. The temple is dedicated to Bhadrakali, who is the main deity worshipped here. Lord Vishnu, Goddess Durga, and Lord Ganesha, are the other deities present here. This 100-year-old temple is only 2 km away from the town of Palakkad. Every year during the month of April, the temple administration organizes dance & musical festival, which is attended by many popular artists from all over India.

Palakkad city is located only 03 km away from this temple, which is situated in Puthur. Public transport like bus, taxi, etc. are available from Palakad to this temple. 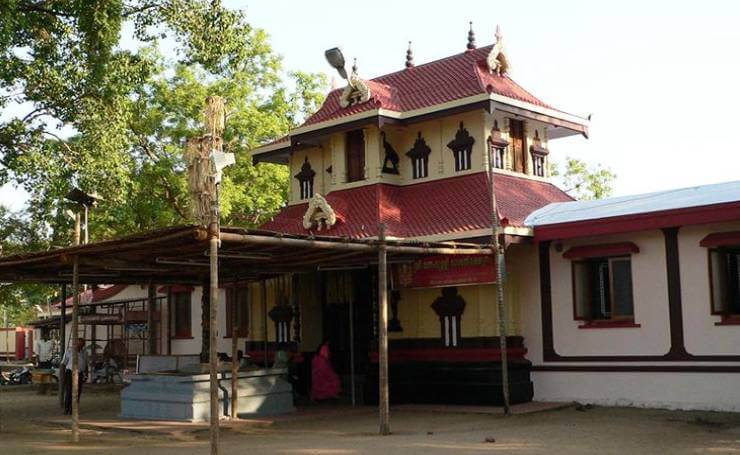 The massive beauty is dedicated to Sri Manappully Bhagavathi, who is the daughter of Lord Shiva and is named Bhadrakali. It is believed that she was born out of the sacred Jada of Lord Shiva during the Dakshayaga and so, the goddess is black in color with four hands, three eyes, and four big teeth. The temple priests dress the goddess beautifully and adorn her with several ornaments every day. Her idol is facing north and is made of the trunk of Jackfruit tree.

Devotees can reach this temple by bus or car or through personal vehicle. It is located around 2 Km away from Palakkad City and is located in Yakkara. 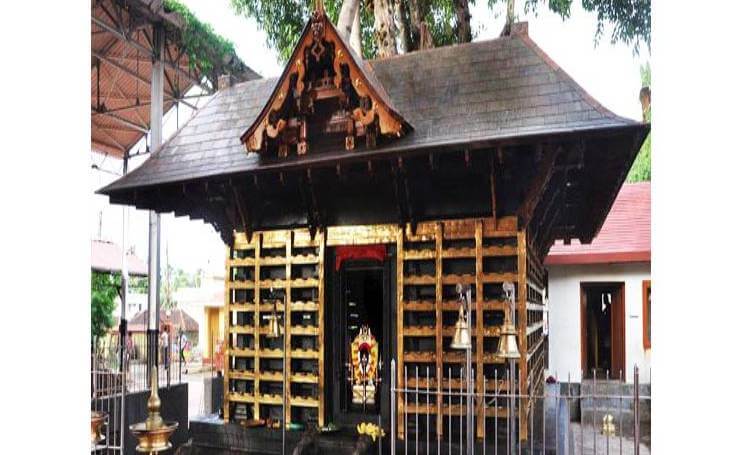 Another ancient beauty, Sri Thirupuraikkal Bhagavathy Temple is considered to be one of the most wonderful temples of Palakkad, responsible for creation, existence and destruction of the world. It is one among the best temples of Goddess Durga, the presiding deity of Sri Thirupuraikkal Temple. Some people say that during the invasion of Tippu Malabar, many ancient structures were destroyed except this Temple, making devotees gain faith in the existence of the god here.

This temple is located around 3 Km away from Palakkad City in Vadakkanthara, which is well-connected through public as well as private transport including bus and taxi. 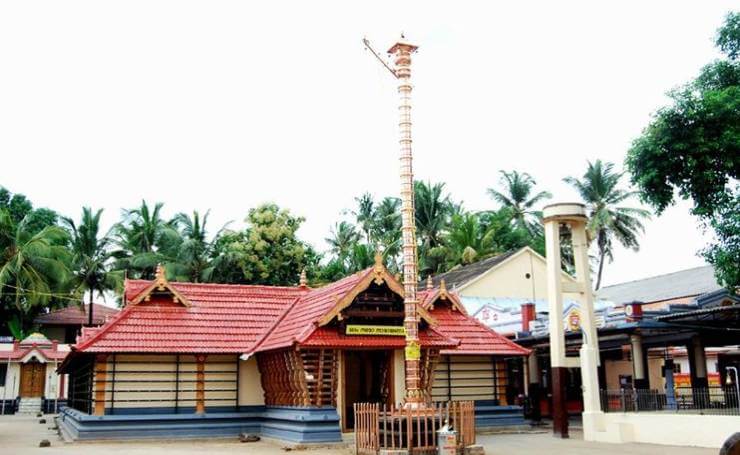 Sri Ramapuram is one of the most ancient temples of Kerala installed by Ramapuram Variath family around six centuries back. The most important feature of this temple is that the deity here, is installed in the ‘Shadadhara Prathishta’ (open ground), which is rare to find in Kerala. Other deities present here includes Ashtadikpalakas, Sapthamathrukkal, Mahaganapathy and Dhanwanthara. This temple is taken care by the Malabar Devasom Board, which is also responsible for organizing various events and festivals.

The devotees can travel for around 3Km from Palakkad City to reach this temple, which is located in Vadakkanthara in the Palakkad district. One can easily travel by public or private transport to reach their desired spot in the city.

Here’s How to Reach Palakkad?

There are a lot of places to visit in Palakkad, but no destination is as attractive and fascinating as these majestic temples in Palakkad. So, if you are on a spiritual journey to this luxuriant city, don’t forget to visit the ancient beauties here, surrounded by imposing mountains and lush green landscapes. These temples have accredited to the religious tourism of Kerala in a lot of ways.

Traveling is one thing that instantly brightens up the spirit of Priyadarshini who was born in the ‘City of dreams’ Mumbai and traveled to coastal cities like Visakapatnam, Kochi, Chennai, and Goa along with her dad who served the Indian Navy. This passionate writer and traveler loves to explore different parts of the country and pen down her experience beautifully. She has a keen interest in fashion and so she makes sure that she explore the style quotient of locals of different cities and nation.