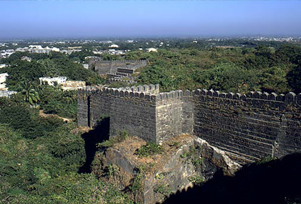 Built in 319 BC by the Mauryan Empire Chandragupta, Uparkot is an ancient fort in the heart of Junagadh. Over 2300 years old, with walls up to 20 m high in some places, Uparkot is what allowed Junagadh to withstand a 12-year siege at one point. In the fort, one can see relics and ruins from a different stage of history including Hindu, Muslim and Islam influence that is pass through. Among the princely states, Junagadh was the most powerful kingdom in Saurashtra region and had survived the hard-hitting campaigns of Muhammad Tuglaq and Ahmad Shah.

Somewhere like its exteriors, interiors of the palace also fascinate the history buffs. Inside, the fort there is a Jumma Masjid, a mosque with a rare roof courtyard and carved octagonal openings. Close to the mosque are some set of Buddhist caves, which are actually monastic quarters carved out of rocks 2000 years ago. There are 300 feet deep moats inside the walls of the fort, which was once inhabited by crocodiles, so that if any attacker managed to surmount the high fortifications, they would then either exposed on the upper battlements or fall into the crocodile-infested trench. Also, worth noticing is the main hall sprinkled with pillars with weathered carving. In this three storey complex, there two rock cute stepwells namely Adi Kadi Vav and Navghan Kuvo. All these stepwells are approximately 1000 years old and are adorned with magnificent staircase spirals around the well shaft.