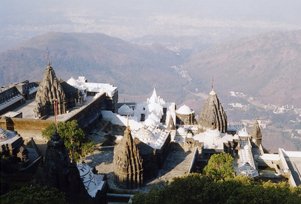 Standing tall at 3672 feet, Girnar is an ancient hill in Junagadh. This centuries old hill is covered with 866 Hindu and Jain temples that are spread over the summits. One will have to climb 9999 steps to reach the final summit. Trek to Girnar Hill starts from Girnar Taleti.

Places that one will come across on a trek to Girnar Hill are Domdar Kund, near the Damodar and Baldvji temples. Historians say that 15th-century poet Narsinh Mehta used to bath in the Domdar Kund and composed many of its beautiful hymns here. As one walks through the rocky paths to visit other summits, travellers will across many temples of different sects of Hinduism. In this series of temples, one will come across Bhavnath Temple where one can see 'naked sadhus' that come to celebrate Shivratri. After 4000 steps up, 800 steps before the first summit, one will reach a plateau with a Jain temple complex. Mostly Jain temples here are dating back to 12th century and are the place where 22nd Tirthankar of Jain religion, died after 700 years of ascetic meditation. After walking 2000 steps, one will start noticing the panoramic view of the Girnar hill. Then the stone trail continues 1000 steps down and 1000 steps back up, to reach the other summits. The last temple on the Girnar Hill is the temples to Kalika, where one can see Aghora sadhus covered from head to toe with the funeral ashes.

An early morning walk to the Girnar Hill is a blissful experience that stays with tourist's memory throughout life. Hindu and Jain devotees often visit these temples as they are sacred. People who are looking for a little adventure and fun can visit for the breath-taking view of the scenery and the architecture of the temples in addition to the challenging climb. 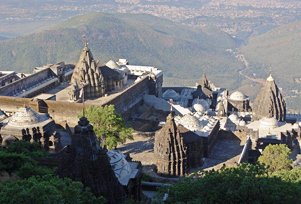 Hindu Pilgrimage Sites Girnar Hill holds a special place for the Hindu devotees. Dattatreya Paduka, an ancient temple located on 9,999 step of Girnar Hill, is the most revered site for Hindu. Locals say that Paduka of Guru "Dattatreya" is resting on the uppermost tonk of the Girnar. As per the facts, Guru Dattatreya is the incarnation of the three Hindu gods Brahma, Vishnu, and Shiva. The place is visited by naga sadhus. Many of the sadhus claim that they have seen the sights of Guru Dattatreya. Gorakshanath Temple, Dattatreya Temple, and Amba Mata Temple are some other temples that are other Hindu Temples that are worth visiting.

Jain Pilgrimage Sites Jain pilgrims call Girnar as Mount Neminath. The Group of temples on the top of the Girnar hill is sacred to both Digambar and Shwetambar, two main sects of Jainism. Girnar Hill has been an important site for Jains since the 3rd century.

Mentioned below are some Jain temples that can be seen on Girhal hill.

Tirthankara Neminath temple
Tirthankara Neminath temple is one the largest temple that is sacred to Bhagavân Neminath (22nd Jain Tirthankar). Historians say that Neminath became an ascetic in this temple when he saw the slaughter of animals for his food on his wedding day. He renounced all worldly pleasures and came to Mount Girnar to attain salvation. Here, Bhagwan Neminath reached the highest state of enlightenment, Keval Gyan and Moksha, after great austerities. Inside the Neminath temple, one can see the black granite idol of Lord Neminath with jeweled eyes. Pillars of the temples are adorned with intricate carvings of Jain Tirthankars.

See below for five tonks on the Girnar Hill:

First Tonk: In the first tonk, one can see Digamabar Jain temple and a cave called Rajulmati cave. There is also a small temple, in which one can see an idol of Bhagwan Bahubali (120 cms) in standing posture.

Second Tonk: After passing 900 steps from the first is the second tonk that showcases Muni Anirudhhkumat footprints and temple of Devi Ambika.

Fourth Tonk: The tonk is known for the fact that the footprints of Pradhyman Kumar-son of Lord Krishna are installed here. He attained nirvana from this place.

Fifth Tonk: The Fifth tonk is sacred to devotees for Lord Neminath's footprints. Lord Neminath, the 22nd tirthankar got moksha from this site.