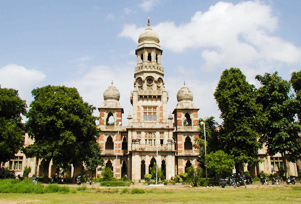 Long regarded as the center of learning, Vadodara's tradition of top-quality education continues today at the Maharaja Sayajirao University of Baroda, the oldest university in the western part of India. Initially, the building was known as Baroda College of Science (established in 1881), it became a university in 1949 after the independence of the country. Later, it was renamed after its benefactor Maharaja Sayajirao Gaekwad III, the former ruler of Baroda State. Spread over 275 acres of land, the university organizes many courses and has many facilities and departments. The main building of the museum, now the art department, was designed by Robert Fellowes Chisholm (1840–1915) in Indo-Saracenic architecture style. Other heritage structures include Kalabhavan, White House, DN Hall and the Science Observatory. The central dome of the faculty of arts built in 1880 is 40 feet high and second largest masonry dome in India. On campus is the Department of Archaeology Museum, where one can see artefacts, found during the various excavations done by the University. Devi Ni Mori, a casket containing the relics of Buddha is also displayed in the museum. Also, there are small museums of botany, musical instruments and geology.

Other Attractions in Vadodara