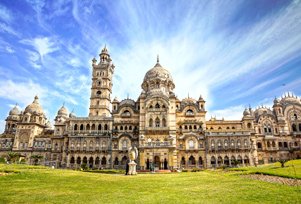 Built in 1890 as the private residence of Maharaja Sayajirao Gaekwad III, Laxmi Vilas Palace is indeed one of the grandest structures in India. Created in Indo-Saracenic style, it is a magnificent hybrid of elements from Hindu, Mughal and Gothic architectural forms with the use of domes, minrates and arches. Built in 1890, Robert Fellows Chisholm, the designer-architect, took twelve years to build this grand building. Sprawled over an area of 700 acres, the palace is believed to be nearly four times the size of Buckingham Palace. It's one of largest palace ever built, housing a large number of buildings like Moti Baug Palace, Makarpura Palace, Pratap Vilas Palace and Maharaja Fateh Singh Museum building. 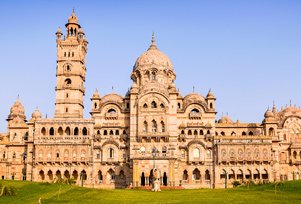 The most impressive Raj-era palaces in India till date, the palace interiors boast well-maintained mosaics, chandeliers and artwork. Laxmi Vilas Palace was fitted with the most state-of-the-art amenities such as elevators at the time of their creation to make it suitable modern palace with western sensibilities. The darbar hall is one of the most majestic features of the palace with Venetian mosaic flooring, Belgian stained glass windows for music concerts and cultural events. This 700 acres palace compound includes the beautiful Navlakhi stepwell, Maharaja Fatehgarh museum, and a small zoo, which was resting ground crocodiles. Maharaja Fatehgarh museum, the section that exhibits paintings by Raja Ravi Verma, was once the school of royal offsprings and a miniature train line encircling the mango arcades connected the place to the school so that the children make the commute easy.

Many activities related to cricket usually takes place at the compound adjacent to the Motibaug Palace. Golf course, swimming pool, clubhouse, gym and Moti Bagh Cricket Ground, the famous museum and the current office of Baroda Cricket Association is also a part of the palace. This massive art-deco palace is still the royal residence and remains open for tourists sightseeing. Laxmi Vilas Palace is one of the most impressive aesthetic highlights for both citizens and tourists alike.

Other Attractions in Vadodara