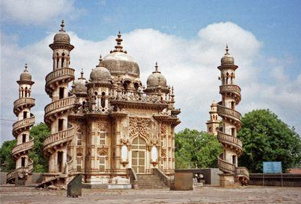 Mahabat Maqbara is a 19th-century mausoleum that currently serves as the landmark of the Junagadh. Mausoleum construction began in 1878 by Mahabat Khanji and was complete in 1892 by his successor Bahadur Kanji. The architecture of the Mahabat Maqbara showcases a melody of Hindu, Islam and Gothic influences in the form of pillars, windows, arches and stone carved walls. Most striking feature of the monument is its staircases encircling the minarets and the domes of different sizes.