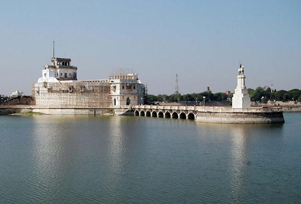 Lakhota Palace, a pleasing palace in the middle of the lake, houses a beautiful repository called Lakhota Museum. Rulers of Nawangar constructed the Lakhota Palace and today it is an important attraction of Jamnagar. The museum showcases the artefacts that belong to the 18th and 19th century including items like a skeleton of a whale, swords, powder flasks, possessions of Jadeja Rajputs, and remnants of Gujarat rulers. Also, there are artefacts describing the life of the people around the region who lived there during the 18th century. Lakhota Museum walls are covered with frescos and paintings depicting various wars that were fought by the Jadeja Rajputs. For those who want to see more of wonderful antiques can visit the Lakhota Palace. Beautiful ambience and palaces are something that shouldn't go unnoticed.