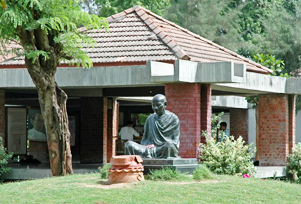 The museum in Gandhi Smarak Sangrahalaya celebrates the achievements of Mahatma Gandhi and depicts his life and work. A trip to Gandhi Smarak Sangrahalaya offers a perfect option for the tourists to spend some time learning about this amazing personality. The audio-visual presentations and exhibits included in the museum are his handmade paper, spinning wheels, diaries, photographs, negative, speech copies and personal belongings. 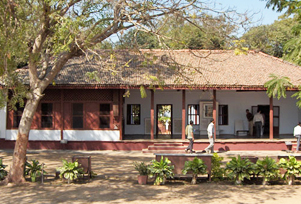 My Life is My Message Gallery exhibits 250 photographs organised in seven parts that explain the entire journey of Mahatma Gandhi from his birth in Porbandar (in 1869) to pivotal role he played in South Africa, England and finally ending with his tragic assassination in Delhi. Also to see in the gallery are photographs accompanied by quotes from his original texts. The museum also has a painting gallery dedicated to his life as here one can see eight paintings depicting Gandhi in various poses. All these portraits are created by Chandulal Shah and Hiralal Khatri (famous textile merchants), and Shri Rajkishore Kapoor. Highlights of the paintings are the fact that groundnut/peanut shells, heated at varying temperatures, were used to create a detailed interpretation of Gandhi.

Also, there is a library and an archive centre that contains manuscripts, letters and diary entries written by Mahatma Gandhi during his stay in Sabarmati Ashram.

The library and archives of the Gandhi Memorial Museum consists of: