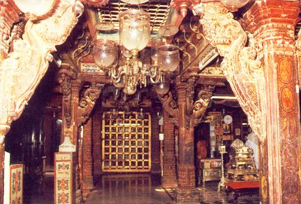 One of the oldest Jain temples in Surat, Chintamani temple was built in 1699 AD during the rule of Aurangzeb. It is located in the Moraji Nagar area of Surat, which is almost in the middle of the city and hence easy to access from any part of Surat. During 12th century AD, there ruled a king called Kumarpal. He belonged to the Solanki dynasty and kept Acharya Hemachandraji as his advisor. The Acharya was a Jain preacher, poet and philosopher, and under the rule of Kumarpal there was overall prosperity in the kingdom. Chintamani temple is said to be constructed to honour those great people.

Chintamani Jain Temple looks very simple from the outside but surprises the visitor with its brilliant piece of creativity and skill. It has intricately and beautifully carved designs on the wood; the ceilings bore paintings made from natural vegetable colour. The paintings depict Acharya Hemachandraji, King Kumapal and other Solanki kings. Apart from the being a religious place of worship, this Jain temple is also a specimen of the art of the 17th century. It is a clean, well-maintained and peaceful temple with religious, meditative, artistic and historic feel to it.

Other Attractions in Surat