Mysore Dussehra is one of the biggest and prominent festivals of Karnataka. The festival is celebrated for a period of ten days in the month of September or October. In Karnataka, the festival is also known by the name 'Nadahabba'. The festival signifies the victory of good over evil. It is also considered the day when Goddess Chamundeshwari killed the demon king Mahishasura after a fierce battle. The festival is celebrated in a very splendid manner with plenty of performances depicting the rich culture and tradition of the state organized in the great Durbar Hall of the Maharaja's Palace. 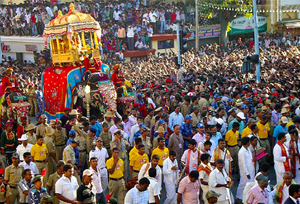 History and Rituals behind the Celebration of Mysore Dussehra Festival

This magnificent festival is celebrated in Karnataka for more than 400 years. The very first celebrations were started by the Vijayanagar Kings in the 15th century. According to the legends, in the ancient times, the city of Mysore was ruled by the Mahishasura, a buffalo-headed demon king. In his kingdom, he punished the people who worshipped the Gods. The Gods then sought the help of the Goddess Parvati, who incarnated in earth as Chamundeshwari Devi. She fought a very brutal battle with the demon and in the end, slew him on top of the Chamundi Hill situated near the city. After killing Mahishasura, the Goddess decided to stay on the hill. Therefore, the hill and city are known as Chamundi Hill and Mysore respectively. The ten day long festival is held in the honor of the Goddess Chamundeshwari.

This grand festival of Karnataka fills the people with great enthusiasm and happiness. The Mysore Palace is illuminated with the lights that captivate the attention of the people. The celebration of the festival generally starts with the royal couple of the palace offering a special puja in the Chamundi Temple, perched on the top of Chamundi Hill. After the puja is over, a special royal assembly is organized inside the palace.

During the festival, plenty of dance performances and music concerts are organized in various parts of the city. The events depicting the vibrant culture of Karnataka attract a large number of people both Indian and foreigners. A dussehra exhibition is also held where the people can purchase various kinds of jewelry items, handicraft clothes, stunning ornaments and eat lip-smacking dishes. The children can have a fun-filled time by enjoying amusement rides.

However, the main highlights of the festival are beautifully decorated elephants, camels and horses walking together in a procession. During the process, the idol of the Goddess Chamundeshwari is installed on a golden mantapa (a temple made up from wood, steel, gold or silver). The mantapa is placed on the top of an elephant. Vibrant music bands and people take part in the procession that ends in an enchanting destination known as Bannimantap. Here, the royal couples worship the 'Bann' tree. It is believed that the Pandavas used the tree to hide their weapons during the one-year period of Agyatvas. The last day of the dussehra celebration is known as ‘Vijayadashami’ with a torch light parade held at the Bannimantap.

How to Get There

The Mysore railway station is one of the best options to reach Mysore as there are many trains ply regularly to Mysore via Bangalore.

Mysore is approximately 139 kms away from Bangalore. The state highway between Mysore and Bangalore is one of the most convenient options for the visitors to reach Mysore for the festival. The Karnataka Road Transport Corporation has best bus service (standard, semi-luxury and luxury buses) to the Mysore.