The name Kumbh Mela originates from Hindi, and more often in the original Sanskrit and other Indian languages, it is referred to as Kumbha Mela. In Sanskrit, Kumbha implies a pitcher and Mela means fair. Being a mass Hindu pilgrimages of faith, this festival boasts of being the "world’s largest congregation of religious pilgrims". It takes place every third year at one of the four places by rotation: Haridwar, Allahabad (Prayag), Nasik and Ujjain. And hence, the Kumbh Mela is held at each of the four spots every twelfth year. Every sixth year, Ardh ("Half") Kumbh Mela happens at only two places, Hardwar and Allahabad. Hindus assemble to bathe in a sacred river during the festival. The rivers at these four places are: the Ganges (Ganga) at Haridwar, the confluence of the Ganges and the Yamuna and the fabled Saraswati at Allahabad, the Godawari at Nasik, and the Shipra at Ujjain.

The exceptional event clubs the religious and cultural features making it an epic experience. The environ is cosseted with chiming bells, incense and flower fragrance, Vedic hymns, mantras, drum-beats, camels, and elephants while the naga (naked) sadhus from different akhadas (orders) proceed in their gold and silver chariots, which are being pulled by devotees. Here they show their paramount vigor and flair clean enchantment for the soul. 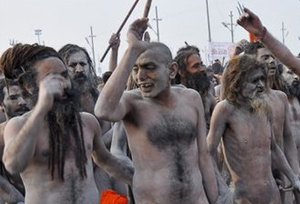 The origin of Kumbh Mela dates back to the time when Gods (Devtas) and Demons (Asura) resided on earth. Due to the impact of a curse, Devtas got scared for their lives that eventually made them feeble and coward. In order to acquire the elixir of immortality, Brahma (the creator) suggested them to churn the milky ocean. The Mandara Mountain played the churning rod and Vasuki (king of serpents) acted as a rope for churning. Kumbh was the pot recovered from Samudramanthan, which had the nectar of immortality.

Devta sseek help from demons to finish the much difficult task with mutual agreement ‘to share the elixir of immortality equally’. Now, demons decided to hold Vasuki’s head and Gods to hold his tail and begin the process. After churning the ocean for 1000 years, Dhanwantari appeared with Kumbh in his palms. The demigods, being worried of the demons' ill intent, forcibly detained the pot with its safety entrusted onto the four Gods - Brahaspati, Surya, Shani, and Chandra.

After smelling the conspiracy of the Devtas, demons turned violent and attacked them. Knowing that demons were more powerful and can easily defeat them, Devtas ran away with the Kumbh. Thereafter, Gods were chased by demons for twelve days and twelve nights, for the ownership of Amrita. Hence, these twelve days of Gods are equated with twelve years of humans. While all were running and chasing this elixir of immortality, the drops from Kumbh fell at four places – Allahabad, Haridwar, Ujjain and Nasik. To honor and celebrate this holy event, Maha Kumbh Mela is organized every twelve years at the four sacred places where the drops from Kumbh were fallen.

Kumbh Melais held every twelve years at one of four places: Allahabad-Triveni Sangam, the intersection place of the rivers Ganga, Yamuna and mythical Sarasvati, where devotes perform rituals, Haridwar- On the bank of river Ganga, Ujjain- On the bank of river Shipra and Nashik- Out of 14 Akhadas in all, 11 belong to the Shaiva sect (one of them- Bhudada Akhada is not in proper functioning, while 10 are active) and 3 to the Vaishnava sect. Shaiva sadhus perform rituals at Trimbakeshwar and Vaishnavs at Ramakunda in Nasik. The Mela in its several forms rotates between Prayag, Nashik, Ujjain and Haridwar every third year. The Ardha (half) Kumbh Mela is marked every six years at only two places, Haridwar and Prayag.

Ardha Kumbh Mela : Held at Haridwar and Paryag, every 6 years.

Purna Kumbh Mela : Held only at Prayag every 12 years.

Maha Kumbh Mela : Held only at Prayag, every 144 years.

The Sadhus at the Kumbh Mela

The term 'Mela' and 'sadhus and holy men' are like synonymous to each other. In search of spirituality, pilgrims who come to participate in the grandly event, listen to these men for divine enlightenment. To list, several types of sadhus are explained below:

Nagas - These are thenaked sadhus who have long matted hair and who coat their bodies with ash. Due to this lifestyle, they get used to resisting extreme temperatures. Smoking charas (marijuana)regularly, make their eyes bloodshot.

Urdhwavahurs - Sadhus who have thin bodies due to performing severe spiritual practices.

Parivajakas - These are the ones who have chosen a vow of silence to be their way to spirituality.

Shirshasinse - Sadhus who meditate standing on their heads are known with this name. They keep on standing and sleep with their heads resting on a vertical pole.

Kalpvasis - Sadhus who reside by the river banks and dedicate their whole time to meditating, performing rituals, and bathing numerous times a day.

The accounts of Chinese traveler Huan Tsang were the foremost to showcase the written evidence of the Kumbh Mela. He visited India in 629–645 CE, which was during the reign of King Harshavardhana.

There is a fixed order in which Sadhus enter the water to bathe. First the Juna, followed by the Niranjani and Mahanirvani akharas carry on into the holy water.

The most amazing point here is that the Kumbh Mela is making its way to become the subject of a case study at Harvard University. Researchers would be going through the logistics and economics that it is based on.