The internationally renowned desert festival of Jaisalmar is held every year in the month of February. The festival is organized with a view to showcase the vibrant culture, glorious past and rich heritage of Rajasthan.Everything about the festival is just magical, be it the camel race, turban tying competition, traditional folk performances, puppeteers, colorful costumes and lots more. The backdrop of themajestic Jaisalmar fort truly provides an unforgettable experience to cherish forever. This three dayextravaganza is full of never ending fun and enjoyment. 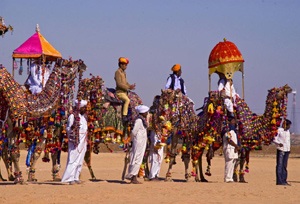 History behind the Celebration of Jaisalmer Desert Festival

Not many people are aware about the history or legend of the desert festival. However, it is believed that in the ancient times, Lord Krishna, ruler of Yadav community, once told Arjuna (one of the Pandavas) that a successor belonging from the Yadav community will set up his kingdom on the Trikuta Hill. In the year 1196, the prediction made by the Lord Krishna came true, when Rawal Jaiswal, a descendant of the Yadav clan, established his kingdom in Jaisalmer. Celebrations were organized throughout the kingdom, when the people came to know that the prophecy has come true. The celebrations soon developed into a festival that is now organized every year.

Celebrations and Events of the Jaisalmer Desert Festival

The vibrant color, dance, music, camel polo, cultural performances, scrumptious dishes and various exciting competitions certainly mesmerize the visitors. The stalls are filled with plenty of artifacts and gift items that can be purchased for the loved ones. Furthermore, many events are also held that not only captivate the attention of the tourists, but also tender a unique charm to the festival.

Dance and Songs by Folk Artists

For the music lovers, the festival is nothing less than a paradise for them as many well-known singers and musicians participate in the festival. The traditional dance performance of the city fills the tourists with utmost passion and excitement. The songs of the ghazal or Sufi singers are certainly a delight for the ears.

Another attraction of the festival is the camel race. The beautifully decorated camels are centre of attraction and people in large numbers participate in the race enthusiastically. It is also a matter of pride, especially for the camel owners to win the race and get the suitable reward.

It is an event that sees participants from various nooks and corners of the city. The long moustaches of the people surprise the spectators. During the competition, men showcase their moustaches with great pride as they try their best to win the coveted longest moustache title.

The people really have a gala time during the turban tying competition when they try to tie the colorful turbans in short possible time. The person who ties the turban before the desired time is declared a winner.

It is an event that sees maximum number of participants. Here, a competition is held between the Indian people and foreign nationals (both men and women) where they are required to pull a rope and make a concentrated effort to drag another team over a central line.

How to Reach Jaisalmer

Jodhpur (around 275 kms away from Jaisalmer) is the nearest airport that connects the city to the various prominent parts of India and abroad.

Jaisalmer has excellent road connectivity with the prominent cities of Rajasthan like the Jodhpur, Ajmer, Jaipur and Bikaner and so on.