The holy festival of Janmashtami, birthday of Lord Krishna, is celebrated with extreme vigor and fervor all over India during the month of August or September. On this day, the ardent devotees of the Lord Krishna observe fast for the whole day and pay homage to the Lord by worshipping him, chanting mantras and singing devotional songs. The temples and idols of Lord Krishna are aesthetically decorated that captivate the attention of the devotees. 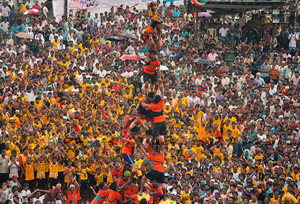 History and Rituals behind the Celebration of Krishna Janmashtami Festival

krishna-janmashtami Lord Krishna is considered one of the eighth incarnations (avatar) of Lord Vishnu. According to the Hindu mythology, the ancient city of Mathura located in Uttar Pradesh state was ruled by the king Kansa. He was a very proud and powerful king who committed several atrocities on the people. He conquered the throne by putting his father King Ugrasen in the prison. To save the people from the evil rule of king Kansa, Lord Vishnu decided to take birth on earth. During the wedding ceremony of Devaki (King Kansa's sister) and Vasudev, there was a sacred prophecy from sky that announced that the eighth child of Devaki and Vasudeva will end the evil life of King Kansa. Kansa become shocked and furious after hearing the prophecy. To safeguard himself, he decided to kill Devaki but Vasaudeva intervened and promised that he would handover the child after his birth. King Kansa put both of them in the prison. One by one, he killed all the six infants. The seventh infant (Balram) was saved due to the holy interference, when he was removed from Devaki's womb to the womb of Rohini (first wife of Vasudev).

When Devki gave birth to the eighth child, it was a very dark and stormy night. Suddenly, a miracle happened. All the securityguards deeply fell asleep and the gates of the prison opened automatically.

Vasudeva heard a prophecy that toldhim to take the child to Gokul at the Nand's home and bring his daughter here. Vasudeva, after crossing the River Yamuna, exchanged his son with the daughter of Nand and returned to Mathura. As soon as the King Kansa was about to kill the baby, it flew in the sky from his hands and announced that the destroyer of Kansa has already born and is safe.

The devotees of Lord Krishna celebrate the auspicious festival of Janmashtami by fasting and decorating their homes. The people worship the Lord all the night in temples, listening to his tales and waitingeagerlessly for his birth. The little children are dressed as Lord Krishna, Radha, Lord Shiva, Lord Hanuman, etc and charm the people with their cute smile. In the midnight, after performing the puja, people break their fasts by eating fruits or specially made sweets. In many parts of India, the magnificent idol of the Lord Krishna is placed in the swing and offered delicious food, especially 'Makkhan' (butter) and 'Dahi' (curd).

Janmashtami is celebrated with utmost devotion in various prominent parts of Uttar Pradesh like Mathura, Gokul and Vrindavan. Lord Krishna is believed to have spent most of his life in these places. The temples are splendidly adorned with the colorful flowers and illuminated with the twinkling lights. All the night prayers are offered to the Lord and 'Prasad' is distributed among the devotees.

In Maharashtra, the festival is celebrated with enormous vigor by the people. Here, the festival is well knownas 'Dahi Handi' (breaking pots filled with curd or buttermilk). The pots are suspended at a very higher heightabove the ground and people attempt to break them by forming a human tower or pyramid. In many places, breaking Dahi Handi competitions are held where the winners are suitably rewarded. People sing and dance to the tune of 'govinda aala re aala jara matki sambhal brijbala'.

This sacred festival has got a very high significance in the state of Tamil Nadu. The idols of the Lord Krishna are attractively decorated and placed in beautiful mantapa (a small temple made up of wood or steel). Sweets, locally known as 'Bhakshanam' are prepared and offered to the Lord and among the members of the family.