The most sacrosanct day and the most significant festival for Buddhists, Buddha Purnima is observed with great zeal in India. Even though all the full moon days are termed holy in Buddhism, the Purnima of Vesakh (April-May) holds unique importance as it is the birthday of Gautama Buddha. Several places across the country where there is immense Buddhists population, celebrate Buddha Purnima with great enthusiasm, especially Sarnath and Bodhgaya. Widespread celebrations are there in major Buddhist areas such as Arunachal Pradesh, Ladakh and Sikkim.

It is said that on the same day of the year, Buddha attained enlightenment and salvation as well. This extraordinary three-fold happenstance confers this day an exceptional value in Buddhism. 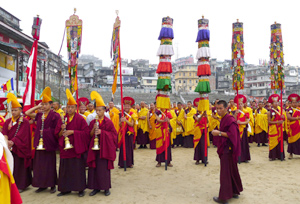 Gautama Buddha, born as Prince Siddhartha, was a great sage from the Indian subcontinent, on whose teachings the Buddhism religion is based. Many scholars are unsure of at what time of history he lived. It is supposed that Buddha took birth somewhere between fourth and sixth centuries BC.

Gautama Buddha was a prominent saint and his teachings enlighten people even today. Many of the Buddhists revere him as a Supreme Buddha. The celebrations to pay homage to Gautama Buddha are being held for many centuries. The World Fellowship of Buddhists formalized the decision to commemorate the Buddha's birthday on Vesakh, at its first conference. This conference was organized in the month of May in 1960 and the venue was Colombo, Sri Lanka. The full moon day of May was fixed as Buddha Purnima.

Different Buddhist communities may perhaps rejoice Vesakh on distinct dates in those years when there are two full moon days (Purnima) in May.

buddha-purnima There are many activities performed to commemorate the birth of Buddha. These activities include prayer meets, recital of Buddhist scriptures, religious discussions and sermons, group meditations, and worshipping of the Buddha's idol.

Many Buddhist devotees visit Buddhist shrines on this sacred festival. The devotees recite verses and spend the day in temples. Some of the Buddhist temples present a small idol of Lord Buddha as an infant, which is put in a basin full of water and decorated with beautiful and aromatic flowers. The devotees pour water on this idol. This signifies a complete new start of life. The worship of Buddha is done by offering flowers, fruits and candles.

The teachings of Buddha are given special attention on this sanctified festival. Money, goods and food are offered to poor. Generally, the devotees wear white dress on this day and avoid the non-vegetarian food. Kheer (A sweet made from rice and milk) is served to remember the tale of Sujata who offered a bowl of kheer to Lord Buddha.

The Mahabodhi Temple at Bodhgaya puts on a celebratory look on the day of Buddha Purnima. This temple is beautified with hued decorations. There are also held special prayers under the Bodhi Tree, under which Gautama Buddha took enlightenment. The holy remains of Lord Buddha are open for public viewing by the National Museum in Delhi.