Ganesh Chaturthi is one of the important festivals for the Hindus, celebrated throughout India as a birthday of Lord Ganesha, the beloved elephant headed son of Lord Shiva and Goddess Parvati. The festival is also known by the name Vinayaka Chaturthi that generally takes place between August and September. The Lord Ganesha is considered as a figure of wisdom, prosperity and great fortune. It is believed that on this day, the Lord comes down on earth to shower blessings upon his worshippers. The celebrations of the festival last for ten days during which the people bring the beautiful idols of the Lord into their homes to worship. The festival is celebrated with extreme enthusiasm and devotion by the people. 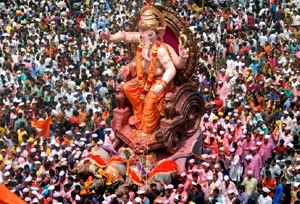 History and Rituals behind the Celebration of Ganesh Chaturthi Festival

Legend has it that the Goddess Parvati created an idol of Ganesha from the paste of sandalwood dough that she used for bathing. She gave life to the idol through her divine powers. She then asked him to stand outside the door and do not let anybody inside till the time she takes a bath. When Lord Shiva, husband of Goddess Parvati returned, Ganesha who did not recognize him stopped him from entering the bhavan (house). This behavior of Ganesha made Lord Shiva angry and the Ganas (Lord Shiva's attendants) asked the Lord to teach the child a good lesson so that he never repeats the mistake again. Several Gods tried their best to appease Ganesha but that did not yield any fruitful results.

Ganesh Chaturthi Celebrations – Welcoming the Lord into the Homes

ganesh-chaturthi Ganesh Chaturthi is celebrated with great joy and fervor in various parts of India, especially in Maharashtra. The preparations for the festival begin to start from two to three months in advance. The magnificent idols of the Lord Ganesha are made by the skilled artisans. The size of the idols can range from very small to huge statues. People install the statues in their homes and specifically prepared structures known as the Mandapas or Pandals. The pandals are wonderfully decorated with the twinkling lights, flowers and various other items. The homes are cleaned are decorated with rangoli. Puja and aarti is performed by the devotees every morning and evening. After the puja, modak (kind of prasad) is distributed among the family members.

After the installation of the idol, a priest is called to instill life into the statue through the special mantras and slokas. The Lord is worshipped for the period of ten days and on the last day; the idol of the Lord is immersed into the river or ocean with singing and dancing. The immersing of the idol into the river signifies that the Lord is taking away all the pain and sorrows of the people with him. This particular ritual is also known as Ganesh Visarjan in Maharashtra.