Gear up for parties, parties and more parties roisterers! Get your act together for New Yearâs Eve and show your moves like never before. New Year comes once a year, so itâs worth making the celebrations memorable. From riotous street parties and fireworks spectaculars to marching bands and torchlight processions, here’s a checklist of some of the awesome parties that the planet hosts on New Year’s Eve and Day.

The people of New York actually know how to welcome the New Year. From the jaw-dropping ball drop to the terrific firework at Liberty Island, New Yearâs Eve celebration in New York puts forth a riot of events that make your experience worth sharing, remembering and cherishing. As soon as the clock strikes 12, eyes of people turn into dazzling light. While some people celebrate the outcome of the New Year with traditional ball drop, other hit the streets & clubs to groove on the rhythm of music. Times Square New Yearâs celebration is the one of the worldâs most electrifying parties. The celebration draws millions of people to count down the seconds to the New Year. Anticipations run high in New York City on New Yearâs Eve as the crowd is bustling with energy to welcome the New Year.

Start your New Year with a spin! Oh yeah, once you are in the Britain capital, London, the New Yearâs Eve celebration madness ought to get double. The Brits gather around the Thames River and enjoy the gigantic firework display at the towering London Eye. People also assemble on the Westminster and Blackfriars bridges to witness this grand celebration. Even the pubs and clubs are open for all the party poopers to get drunk till dusk. Festivities donât end here though! On 1st January, a 3-hour colorful procession takes place from Westminster, unites in and out of the capital’s downtown, and finishes at Green Park. 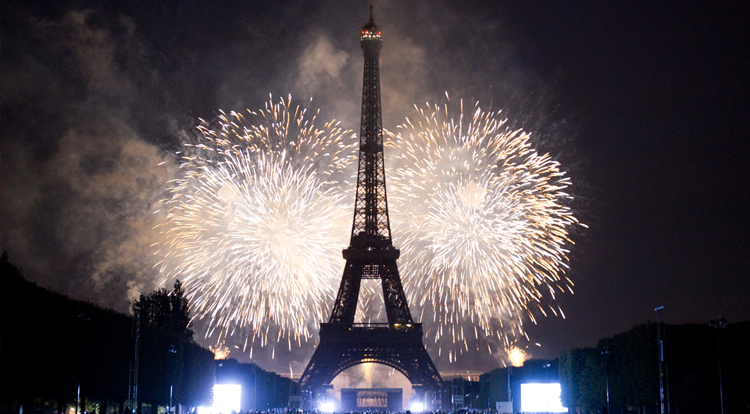 Paris, the city of lights, has many ways to say âBonne annÃ©eâ which means âHappy New Yearâ. If you want to indulge in some wild drinking sessions or just want to pop champagne, then Paris stands as your most appropriate option to usher New Year. With welcoming crowd of France, amid echoes of the countdown, you will have the most amazing time of your life. In Paris, the New Year celebration lasts for a month. Thus donât get surprised if anyone in the middle of January wishes you a Happy New Year. Paris is buzzing on New Year’s Eve as the restaurants offer delicious French meals that lead the way towards countdown and make the celebrations even mesmerizing.

When it comes to New Year celebration then donât ever doubt the carousing capacity of Sydney. Ring in the year 2015 with the city which never sleeps. Sydney hosts the largest firework display in the world, which lasts for more than 12 minutes. As soon as the clock strikes 12, the Sydney Harbour becomes the stage which shows the grand propositions that fill party poppers and families with delight. If you are one of those quiet people who wish to usher the New Year far away from the hustles and bustles, then hop on the decked up boats which will take you to the illuminated side of Sydney Harbour.

If someone asks me, where to head this New Year then I will definitely suggest Rio de Janeiro. The reason is it is one of the most happening party destinations not only in Brazil but across the world. Every year, Rioâs Copacbana beach hosts the worldâs wildest and largest New Year celebration. If you are planning to hit the party, then accessorize yourself in colour white because it is considered auspicious by locals. With its enormous fireworks display and groovy beach dance parties, Rio de Janeiro has firmly maintained its reputation of the best New Yearâs Eve celebration destination in the world. The shorelines of Rio de Janeiro are the perfect place to celebrate the New Year, not only for warm weather & soft sand, but also for amazing parties, fantastic dinners and live music. On New Yearâs Eve, many people follow the practice of throwing flowers in the sea. The practice is an offering Yemanja, the deity of the sea.

You canât ask for a better place in India if you want your New Year to be a really special celebration. Dance under the stars and groove like never before on the beaches of Goa. If you are in India, then Goa is the perfect gateway to indulge in some party time to welcome the New Year. The state is speckled with classy pubs and clubs where you can let your hair down and lift up your spirit up. Scrumptious seafood galore, beer bottles and pleasant weather make Goa the bliss for all the party-lovers.