Wildlife Crime Control Bureau (WCCB) of Indiaâs Ministry of Environment, Forest and Climate change has been awarded with the Asia Environment Enforcement Awards by United Nation for the year 2018. The award has been given for WCCBâs efforts in combating transborder environmental crime.

The award is given every year to the government, private, Non-Profit and Non-government organisations for their efforts in curbing environmental damage and environmental crimes.

The award given by the United Nations is a testament of efforts of the team or organisation in curbing and fighting environmental crimes done across the globe. Agencies like Interpol and USAID have also received the awards in previous years for their efforts in contributing to the environmental protection programs. The theme for the year 2018 was transborder environment crime. This year 9 institutions from Asia have been recognized by the United Nations, Interpol and USAID for their outstanding contribution in fighting the cross-border environmental crimes such as poaching and trafficking. The major highlight of the event was on the ongoing wildlife trafficking in Asia and winners from India, China, Republic of Korea, Nepal, Thailand, Vietnam, Malaysia accepted awards for tackling the international crime networks that have caused substantial damage to wildlife across the globe.

Wildlife trafficking is considered to be the fourth largest crime after drug smuggling, counterfeiting and human trafficking. The total damage caused by the crime network is estimated to be $258 billion per year. This includes illegal trafficking, poaching, smuggling of ozone-depleting substance, dumping of waste, illicit trade of forestry products and illegal mining. 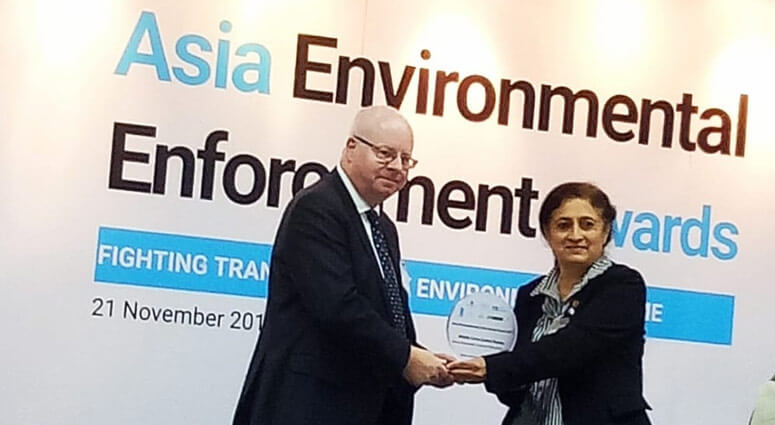 Congratulating the WCCB, the Union Minister said that the award recognises the hard work done by Government officials and officers of the bureau in diligently tackling the cross-border wildlife crimes.

UN Environmental Regional Director of Asia and the Pacific, Dechen Tsering said that Humanity is the guardian of the natural order of the world and these winners are the tip of the spear. He believes that without the commitment and dedication of these winners, all the plans of environment protection are just a paper tiger. He said that though some of the efforts of these brave men go unnoticed, itâs their courage, determination and will we need to witness more to preserve this planet from facing irreconcilable damage.

Integrity – Le Thi Hang, Judge at Khanh Hoa People’s Court in Vietnam has been awarded the Integrity awarded for bringing justice to one of the biggest environmental cases in the history of Vietnam when no other judge dared to take up the case.
Pillar 4: Central Investigation Bureau, Nepal Police has been awarded the Pillar 4 award. Despite being a small team with limited resources, the team managed to dismantle an international network of wildlife trading.
Special Commendation – Wichien Chinnawong, Chief of the Thungyai Naresuan Wildlife Sanctuary, Thailand has been awarded for carrying out their duties to enforce the rule of law after it was made clear that one of their members belonged to a wealthy family.
Category – The Impact award was given to Thai Law agency which included Royall Thai Police, Customs and the Department of National Park for their efforts of tackling wildlife trade.