Must have heard that Dubai is the go to destination for travellers who love luxury enveloped in the form of anything and everything. And it might be a surprise for some to know that Indians prioritize Dubai as their ultimate travel destination if planning an international vacation. To state this true, the recent data published by the Department of Tourism and Commerce Marketing declared South Asia as the top untamed source of tourism in Dubai. The city saw 15.8 million visitors out of which 2.1 million were Indian faces. As compared to last year, this time the statistics witnessed a rise in the bars by 15 percent as compared to 2016. Part of the credit is showered over the heartthrob of Indian Cinema, Shah Rukh Khan who was in collaboration with Dubai Tourism through the campaign #BeMyGuest.The South Asian country is followed by Kingdom of Saudi Arabia, United Kingdom, Oman and China to name a few. 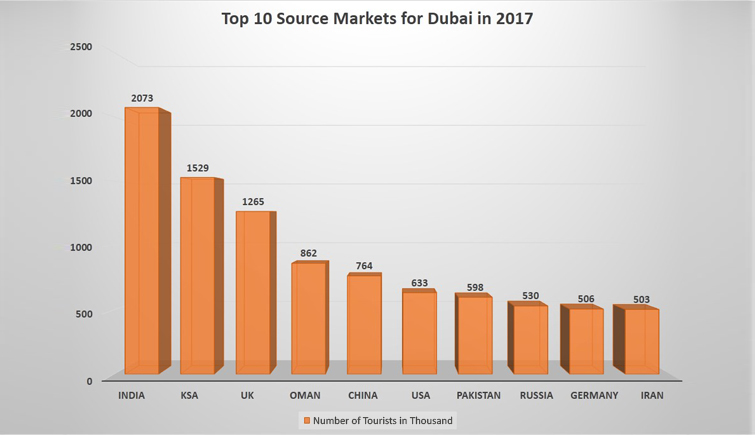 The desert city which changed its look overnight is now counted among the best destinations in the world and is steadily making its name in the tourism business. With that being said, the Director General of Dubai Tourism, His Excellency Helal Saeed Almarri is really happy with the increase in the number of tourists visiting the city which resulted in a growth of 6.2 percent. Further, the next aim to achieve are the 2020 tourism targets which involves pulling 20 million visitors per year from 2020 via tourism. Being the proud owners of Emirates, one of the top airlines, Dubai is making eminence as a tourist destination which globetrotters choose to sojourn. Acting as a celestial city for luxury seekers, Dubai is the domain of all things nice starting from tourist attractions Burj Khalifa, Dubai Fountains, The Dubai Mall,Wild Wadi Water Park to hosting some of the best festivals.The year 2017 also saw the inauguration of some of the most spellbinding creations like the beachfront La Mer, Etihad Museum, La Perle in Habtoor City, Dubai Frame,Dubai Safari. This was followed by the successful running of Dubai Parks and Resorts and IMG Worlds of Adventures last year.

The glitzy and glamorous Dubai is famous for its abundance of tourist attra...

15 Reasons that will Force You to Travel to Dubai

Dubai, the glamorous and the richest city in the United Arab Emirates is no...

The three things that always come to oneâs mind when one hears Dubai R...