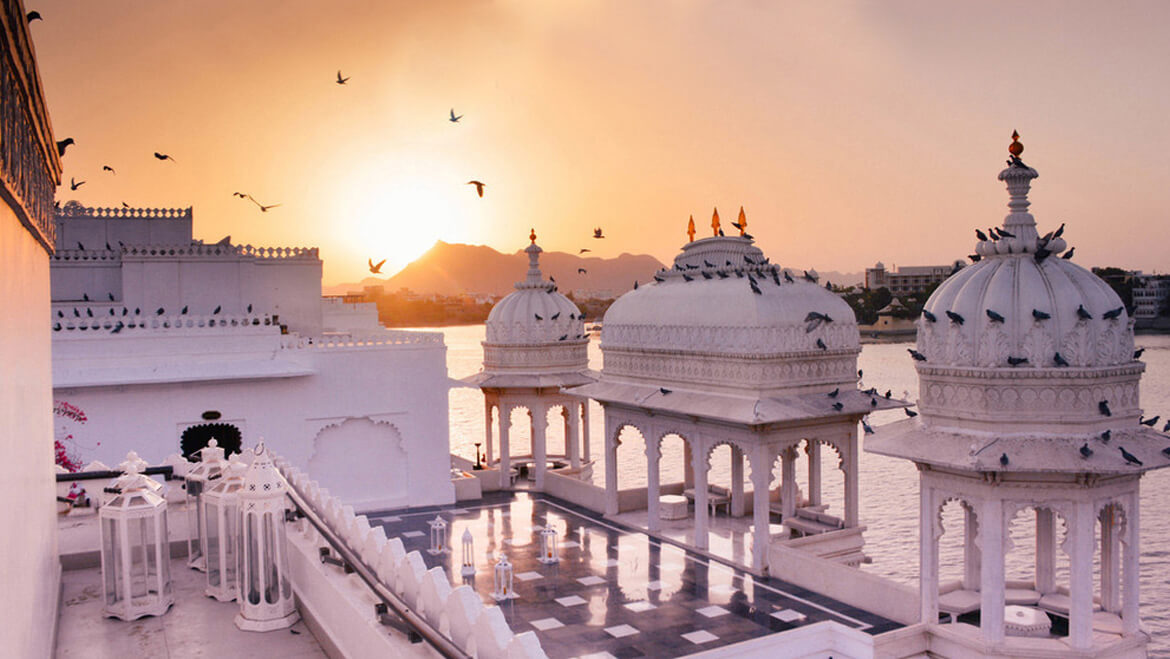 A leisure time away from work is normally devoted to rest or pleasure and that just not depends upon the destination you are travelling but also the place where you are accommodating. We all have some dreams but only few lucky ones can go for it. One such dream that you want to live with in real can be spending a night or two in one of the amazing hotels in India. Reintroducing the medieval era in the contemporary period… Indian tourism has set up several heritage hotels that include the palaces of Maharajas, Mughals, Nizams and mansions from the colonial era… thus ramming our mind to build castles in the air. ‘One day I’ll be visiting this hotel with my… even to sip a glass of wine’, this crosses our mind whenever we cross a luxury or heritage hotel. Further, at the door of 21st century we are also living in the midst of several theme based Ayurvedic and Wildlife resorts. So picking the best from the bucket of heritage hotels and theme based resorts is not an easy one. Let me simplify and bring you a comprehensive list of 10 amazing hotels in India you must visit when you are in the country.

Undoubtedly the most romantic hotel in India and in the world, the Taj Lake Palace, Udaipur, is a must visit hotel when you are in India. Sparking with unanimous luxury, having 66 rooms and 17 suites that offer impending sense of attachment with stunning views of Aravalli Mountains and intricate royal décor, the Taj Lake Palace shines as a bright marble palace in the mist of Lake Pichola. It was built between 1743 and 1746 as a royal summer palace and was then called Jag Niwas. Today… the Taj Lake Palace still holds the regal durbars in its courtyards lined with columns, pillared terraces, fountains and gardens and thus reprising the bygone era in the mid of modern trivia. The hotel maintains some fine dining options… especially the Mewar Terrace which is suitable for a private wine and dine session while enjoying the impressive view of  Lake Pichola, City Palace and Maonsoon Palace. The other options are Mewar Mahal and Lily Pond. Further, from the panoptic wine section one can pick from a huge collection of exotic and elegant liquor and enjoy the pleasing atmosphere. A perfect retreat for those love birds… looking for an ideal honeymoon holiday in India and for those travellers seeking for a luxury holiday in Rajasthan amid the traditional diorama.

When you have made up your mind to visit one of the amazing hotels in India then I’m damn sure that the Taj Mahal Palace, Mumbai, is in your itinerary. Overlooking the Arabian Sea and close to one of the major tourist attractions of Mumbai, the Gateway of India, which was built during the British era in between 1914-1924 to commemorate the landing of King George V and Queen Mary, the Taj Mahal Palace hotel is a flagship property in India from historical, architectural and political point of view. The hotel over the years has witnessed several ugly incidents but none have able to damage its  hospitality and majestic ambiance. Inaugurated in 1903 by Tata… the Taj Mahal Palace today boasts 560 rooms including 44 suites giving a treasure-trove of invaluable memorabilia. It maintains unique dining options starting from the rich culinary heritage of the Subcontinent to popular Western, Mediterranean, Italian, French or Japanese dishes… but the Casblanca is worth to leave an indelible impression in your lives. Moreover the Java Spa is surely going to blend your stay with Indian rejuvenation therapies ranging from Indian aromatherapy massages, time-honored Indian treatments, body scrubs and wraps. Further… the gallery preserves a diverse collection of paintings and works of art, from massive Belgian chandeliers to contemporary sculpture, and thus making it one of the amazing hotels in India.

No matter what is going to come in your life… I know a trip to Agra is ideal for all the travellers. And when you step into the city of Agra that host several medieval marble and red sand stone architectures reflecting the Golden Era of the Mughal Empire, you can’t deny that you are rewinding the chapters of Indian history. In the midst of the quaint odyssey… the Oberoi Amarvilas looms with a holistic environment that is built in a style inspired by Moorish and Mughal architecture. With terraced lawns, fountains, reflection pools, pavilions and detailed interior, the Oberoi Amarvilas is one of the leading hotels in the world, and is approximately 600 meters from the Taj Mahal. The hotel offers sheer luxury 102 elegant rooms – categorized as premier rooms, deluxe suites, luxury suite and Kohinoor suite. It also maintains two restaurants that cater to an a la carte menu, a bar and a lounge. Further, one can pour himself in the grandeur of the Mughal era at the Spa and Fitness centre, which offers a wide range of Ayurvedic treatments including ancient Thai and western techniques. Why it stands out as one of the amazing hotels in India is not just because of its opulent ambiance but it’s at the time of dawn when you can wake up to the illuminating sight of the Taj Mahal.

A classy way to spend your vacations in Hyderabad and retracing the steps of the Nizams is by putting up at the royal property of the Taj Group of Hotels, the Taj Falaknama Palace. Built over a sprawling 32 acres of land during the late 19th century that belonged to Paigah Hyderabad State and later owned by the Nizams… today it is one of the finest palatial hotels in India that maintains 60 princely rooms – categorized as luxury rooms, palace rooms, historical suites, royal suites, grand royal suites and grand presidential suite. It also maintains an unbeaten dining option with “Shikaar ka Khaana”, “Shahi Dastarkhaan”, The Royal Terrace and the Hookah Lounge. On the other hand, at the Royal Jiva Spa one can transport himself to the bygone era of Cleopatra and experience a holistic rejuvenation session with exclusive natural Ayurvedic products and a gentle approach to all round healing. The Taj Khazana, which is a boutique and part museum, makes the Taj Falaknama Palace one of the amazing hotels in India… unwrapping Indian culture and tradition.  It exhibits a huge collection of miniature paintings to designer garments, jewels and handbags, antiques and apparels.

Located in the heart of Kolkata on Jawaharlal Nehru Road, the Oberoi Grand is one of the finest masterpieces from the colonial era. It was built in an extravagant neo classical style during the early 20th century bringing up the English population of the city to celebrate New Year party and other events. Today, the Oberoi Grand, Kolkata is one of the luxury hotels in India and the stunning marble architecture along with colonnaded verandahs and balconies, projecting portico and ornamented façade offer an amazing experience of rich and preserved heritage. The hotel maintains 209 classy rooms – categorized as deluxe rooms, luxury rooms, premier rooms, classic suites, deluxe suites and luxury suites. It also boasts two fine multi cuisine restaurants, La Terrasse and Baan Thai, and the Chowringhee Bar. Moreover, the adjourning time at the Oberoi Spa and Fitness Centre pours you down with treatments based on Aromatherapy, Ayurveda, Eastern and Western techniques AND the pool side bar allows you to relinquish the bustling city hour.

Redefining the modern era, the Floatel, which is one of the Eco-Friendly hotels in India, located on Strand Road, Kolkata, at the edge of the Hooghly River, is another amazing place in the city where you can experience sheer luxury, tranquility and enjoy panoramic views of the city. It maintains a multi – cuisine restaurant (The Bridge), an authentic bar (The Anchorage Bar) and offers a host of rejuvenating and recreational facilities like steam bath, massage centers & Jacuzzi. A perfect hideaway for couples from the cityscape… the Floatel is famed for its serene surroundings and for offering fantastic views of the Howrah Bridge and Vidyasagar Setu.

What make the Wildflower Hall, Shimla, one of the amazing hotels in India is its striking surroundings. This heritage property, belonging to the Oberoi Group of Hotels, is spread over 22 acres of virgin woods of pine and cedar at an altitude of 8,250 feet. Built during the British era, the Wildflower Hall is the former residence of Lord Kitchener that uprose with its grandeur as one of the luxury properties in the Indian Himalayan region. The hotel with its exterior and interior design brings the glory of old warm charm. It maintains 85 intrinsically contrived rooms – categorized as deluxe garden view rooms, premier garden view rooms, premier Mountain View rooms, deluxe suites and a Lord Kitchener Suite. Further, it is also recreated with two authentic restaurants and the Cavalry Bar that racks rich collection of rare spirits. Moreover… the Oberoi Spa at the Wildflower Hall allows you to experience world class Ayurvedic treatments based on Asian and Western therapies.

Far from luxury… who are seeking to scout the wilderness being in it, for them the Treehouse Hideaway in Bandhavgarh is an ideal escape. With only 5 exclusive Tree houses amid the dense wood, spreading over 21 acres of land and overlooking the tiger reserve and Bandhavgarh Fort… the Treehouse Hideaway makes one of the amazing places to spend your wildlife holiday in India before you think of anything else. It is a theme based resort that brings out the traditional jungle living style. Nonetheless… it is perfect escape for couples looking for a wild honeymoon (LOL) and who are overzealous about privacy. It also maintains a bar that serves both International and Indian liquor.

None can escape from the backwaters of Kerala when thinking of spending an exotic holiday in India and hence the Citrus Retreat in Alleppey comes up as a perfect getaway. Strategically placed along the banks of the Pallathuruthy and in the midst of lush green palm forest, the Citrus Backwater Spa Retreat is famed for its rich hospitality, scrumptious sea food, Ayurvedic massages and lazy boats rides. It maintains 32 rooms divided into – deluxe rooms, deluxe suite and deluxe pool villa. Further, guests can also enjoy an exotic houseboat cruise and also spend some refreshing hours at the Paradisi – Spa and Cruising Spa – Nirvana.

Top Things to Do in and around Bandhavgarh National Park

Break open your SENSES. Kick out your STRESS. And live up to your SPIRIT… as you are now at the Zuri White Sands Goa Resort & Casino in Goa. Overlooking the Varca Beach, the resort is an epitome of true spirit and flavour of traditional and present Goa. Beating the time with music, dance and fun, the Zuri White Sands Resort & Casino is a perfect escape for both leisure holidayers and hippies. It maintains 156 well appointed rooms, extensive options for dining and plethora of recreational activities for both children and adults. The newly opened casino – Tune Dunes – is yet another opportunity to spend some gala time  and make some money. On the other hand, the Maya Spa at the resort offers signature treatments with pampering Ayurvedic massages. It also maintains separate steam rooms, saunas and Jacuzzis for men and women.