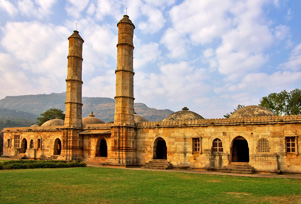 Tourists who want to relive the bygone era of Glorious Gujarat should visit some of its historical sites like Champaner, Dholavira, and Lothal. Some of the sites are so old that here one can see the traces of Indus Valley Civilization. Dholavira and Lothal came into limelight when ASI discovered here the remains of the Indus Valley Civilization. Historians say that Lothal was the trading center that connects with Sindhi and Dholavira was an ancient city sprawling over an area of 100 hectares. A sense of excitement takes over tourists when they take a leap in past and see the ancient world, which is so beautiful and peaceful.

The deserted Champaner, a UNESCO world heritage site, is an ancient town situated at the foothills of the Pavagadh city. A major portion of Champaner lies in ruins today, with the remains of many mosques and temples reflecting Jain and Islam tradition. Highlights of the park are 11 heritage monuments located in the complex and especially the Chalcolithic Indian Sites from the Stone Age era. Ruins of Champaner tell a story of people, of civilization from long ago. These beautiful and ancient sites bear testimonials to the city's glorious past.