Notable for a flowerlike shape and being one of the prominent tourist attractions in New Delhi, the Lotus Temple is located amidst the lush green landscape. Visiting the temple one could sense the pleasant and tranquil ambience which is perfect for the ones looking for meditation, peace and wisdom. The beautiful structure is visited by the locals and international tourists all throughout the year. The vicinity of the temple comprises gardens decorated with towering trees, short bushes and colorful flowers.

Designed by Iranian-American architect Fariborz Sahba, the Lotus Temple was completed in November 1980 and was opened for the public in December 1986. Also, the architect won acclaim for the project before the completion of the temple project. The Lotus Temple being one of the seven Baha’i Houses of Worship has won numerous architectural awards and has also been subsequently featured in many newspapers and magazines. Later in the year 2001, a report declared Lotus Temple as one of the most visited buildings in the world.

The construction of the splendid Lotus Temple took nearly 10 years before it finally got the shape of a lotus. Entering the temple complex tourists can witness that the building is composed of white marbles, cement, dolomite and sand with around nine crystal clear pools dotted over it. Also, tourists can witness the 27 freestanding petals that are made of marble. Also, there are nine reflecting pools that encompass the temple from outside that appears to be even more beautiful during the dusk. The temple has the capacity to accommodate nearly 2500 people and has nine doors that open in a central hall.

The entry to Lotus Temple is free.

Although the Lotus Temple can be visited all throughout the year, considering the winter season between November and February would be an ideal choice as the weather remains pleasant and favourable to explore the complex with less humidity.

TOP THINGS TO DO & PLACES TO SEE NEARBY

One needs to get down at the Kalkaji Mandir Metro Station that falls under the violet line route. Reaching there tourists can avail various private and public transportations to reach the temple. 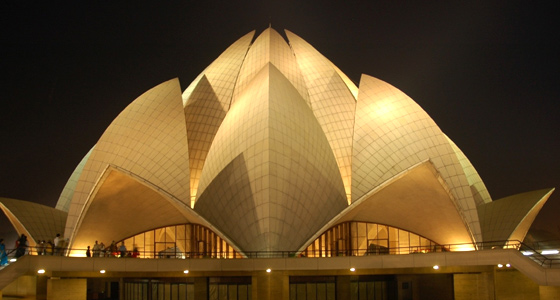 Top Things to Do in Delhi During Your Vacation

Delhi Travel Information at a Glance