Best Season for Trekking in India

As an ardent trekking enthusiast, you might be wondering, when is the best time to go trekking in the Indian Himalayas? Well, the best season for trekking in India depends on the particular kind of trekking experience you are looking to have. Planning a trekking trip in summer has its own excitement compared to those in winter. Some treks are accessible during a particular season, like the Chadar Trek during winters.

However, there are opportunities in India for trekking during the Spring, summer, monsoon, autumn and winter season. 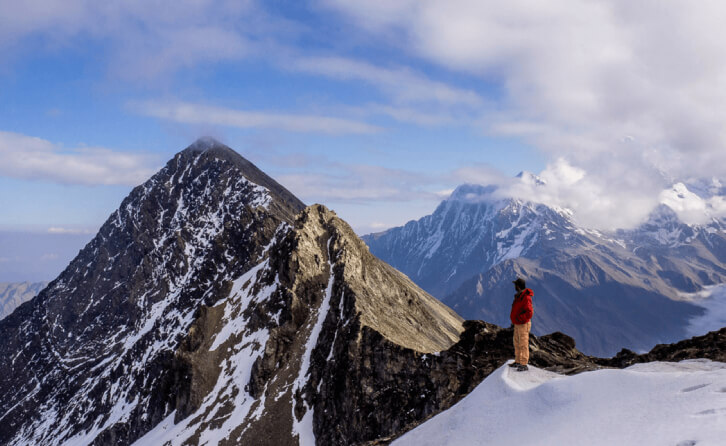 The spring season, which starts from March, brings about a new life in the landscape, with colors bursting forth everywhere. Trekking during the spring season is best suited for those who want to escape crowds and yet enjoy the excitement and pleasure of trekking, especially in the Indian Himalayas states of Uttarakhand, Kashmir, Sikkim and Himachal Pradesh.

While the trekking routes in Uttarakhand & Sikkim are dotted with blooming rhododendrons, in Himachal, the trekking routes are decorated by nature with beautiful peach tree flowers. Jammu and Kashmir is also exceptionally beautiful during the spring season, with the lushness of the meadows immediately putting a smile across your face. Some of the top treks which are best for the spring season in India are Dayara Bugyal, Kedarkantha and Har ki Dun in Uttarakhand, Hampta Pass and Kareri Lake in Himachal and Goecha La in Sikkim. 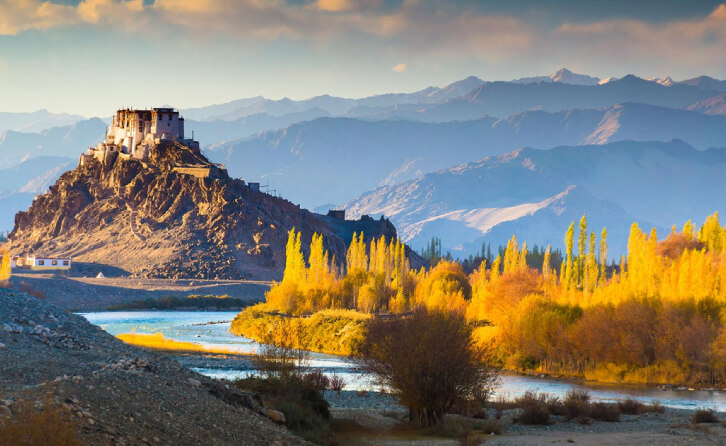 Summers in India, which start from April and last till June, is a wonderful time to enjoy summer trekking in India. The Indian Himalayan states of Kashmir, Sikkim, Uttarakhand & Himachal Pradesh, offer great opportunities for trekking during the summer season in India, both for amateur trekkers and advanced trekkers.

From easy treks to moderate treks like Hampta Pass, Beas Kund and Bhrigu Lake in Himachal, Tarsar & Marsar Lake in Kashmir, Kanchenjunga Base Camp in Sikkim & Chopta Chandrashila, Satopanth Lake in Uttarakhand, summer is one of the best seasons for trekking in India. During this time, several high altitude and challenging treks in the Indian Himalayas become accessible. 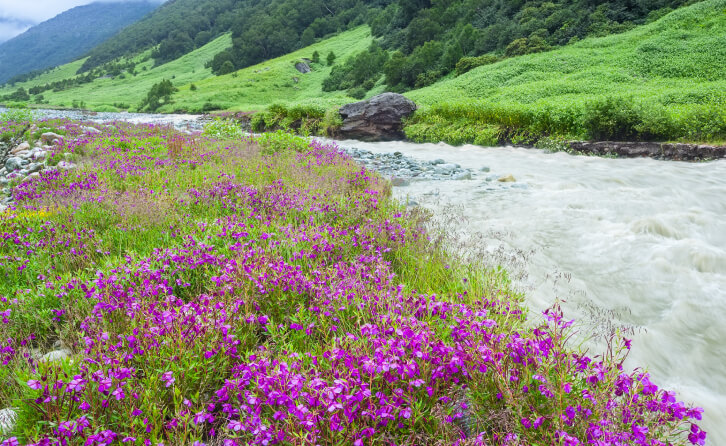 Ardent trekking enthusiasts, whether amateur or advanced, can look forward to trekking during the monsoon season too, particularly in Ladakh, which receives scanty rainfall. While the other Indian Himalayan states receive rainfall, that adds to the overall experience, both in terms of excitement and adventure. Although Uttarakhand and Himachal receive heavy rainfall during the monsoon season, they all have a number of wonderful treks to offer.

In Uttarakhand, for example, monsoon is the time when religious/spiritual treks are taken, like Kedarnath, Tungnath, Rudranath, Yamunotri and Hemkund Sahib, among others. One of the most famous monsoon treks in Uttarakhand is the Valley of Flowers trek, which is a UNESCO World Heritage Site and extremely rich in both flora and fauna. Other top monsoon treks in Himachal are Pin Parvati, Hampta Pass & Indrahar, and in Kashmir are Great Lakes and Tarsar Marsar Lakes. 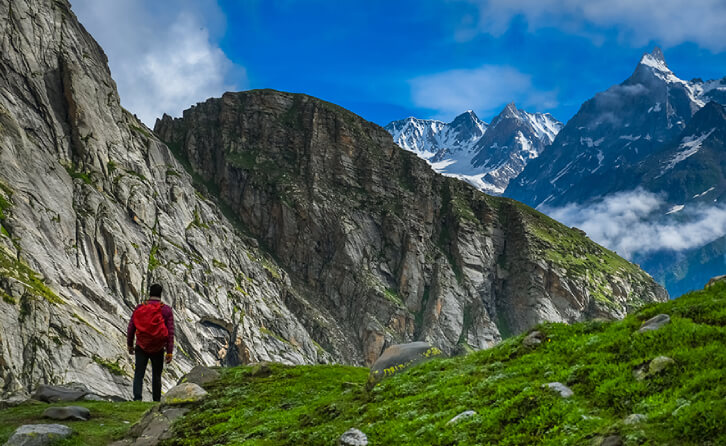 The autumn season in India begins from October and lasts till November, and is the time when the beauty of the Indian Himalayas is unsurpassable. While the days are still warm, but not unpleasantly hot, you begin to feel the chill during the night time, which makes night camping by a bonfire such a delight.

This season attracts a large number of trekking enthusiasts in the Indian Himalayan states of Uttarakhand, Sikkim, Himachal and Kashmir. Some of the top autumn treks to try in Uttarakhand are Chopta Chandrashila, Har ki Dun and Dayara Bugyal, Hampta Pass & Buran Ghati in Himachal, Goecha La and Sandakphu in Sikkim and Great Lakes Trek in Kashmir. 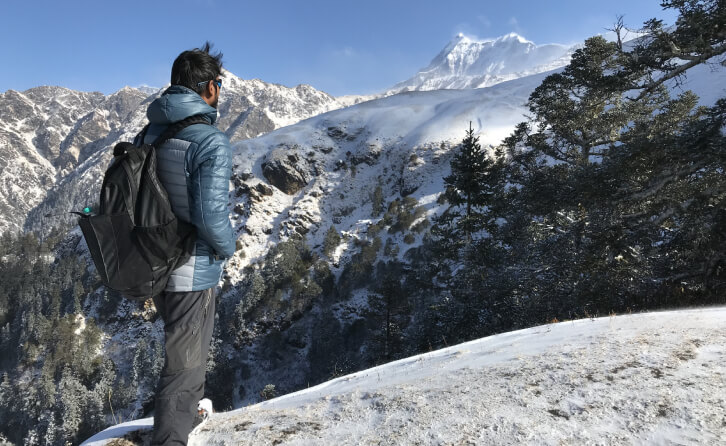 The onset of the winter season, from November to Feb/March, brings with it its own challenges on the usual trekking routes, while offering trekking opportunities exclusive to this season, like the Chadar Trek in Ladakh, where you walk on a frozen Zanskar River. Almost all the trekking trails in the Indian Himalayas during this time are covered in snow, making them more adventurous and challenging. Some of the famous winter treks in India are Snow Leopard Trek in Ladakh, Nag Tibba, Chopta Chandrashal in Uttarakhand, Kareri Lake and Bhrigu Lake in Himachal and Goecha La in Sikkim.

Q.  What are the best summer treks in India?

Q.Is trekking during the winter season safe in India?

Yes, it is quite safe to enjoy trekking during the winter season in India, as long as you are equipped with the proper trekking equipment and follow the designated trekking trail.

Q.Which monsoon treks can be enjoyed in Ladakh?

Some of the best monsoon treks to be enjoyed in Ladakh are Stok Kangri, Darcha Lamayuru, Sham Valley and Darcha Padum.

Q.When is the best time for taking the Valley of Flowers Trek in Uttarakhand?

Q.Can we go hiking in the Uttarakhand Himalayas during the monsoon season?

Yes, you can go hiking in the Uttarakhand Himalayas during the monsoon season. In fact, some of the top monsoon treks in Uttarakhand are Valley of Flowers, Hemkund Sahib, Roopkund Trek, Dayara Bugyal and Kedarnath.

Q.What are some of the packing essentials for trekking in the Indian Himalayas?

Some of the packing essentials which you should always carry while trekking in the Indian Himalayas are:

Q.What is the best time to take the frozen River Chadar Trek in the Indian Himalayas?

The winter season, or from late December to January, is the best time to take the frozen River Chadar Trek in the Indian Himalayas.