The trekking trails of Uttarakhand cut across the alpine meadows, moraine ridges, pine forests, valleys, sleepy villages and rivers, while offering you spectacular views of the snow capped peaks in the Garhwal Mountain range. Naturally, they attract trekking enthusiasts in impressive numbers throughout the year, since there are several treks in Uttarakhand which can be enjoyed in summer, monsoon and winter. These are as far as the famous treks in Uttarakhand are concerned. However, there are also exceptionally beautiful places and spots in Uttarakhand which can be reached via trekking & hiking, but have remained hidden from the prying eyes of tourists. Perhaps, their unexplored beauty is what precisely lends them their peculiar charm.

In this blog, we will tell you about the lesser known treks in Uttarakhand which have not yet gained popularity among the tourists. The unexplored trekking trails which we will tell you about in this blog offer one of the best retreats for both adventure & nature trekkers in the Himalayas. The very prospect of going on offbeat treks is an alluring one, simply because they are not touristy. Following the unexplored trails also introduces you to new tourist destinations where each experience is a unique one. While some of these hidden trekking trails lead to wide open lush bugyals, or meadows, others take you to unbelievable heights, from where you are treated to views of snow capped mountain ranges like Bandarpoonch, Trishul and Chaukhamba. These lesser known treks also let you explore the hidden natural treasures of the Himalayan villages, trees, wildlife and the local culture. We will now tell you the lesser known treks in Uttarakhand and why, as trekking enthusiasts, or even those looking to explore the hidden natural beauty of this part of India, should take them! 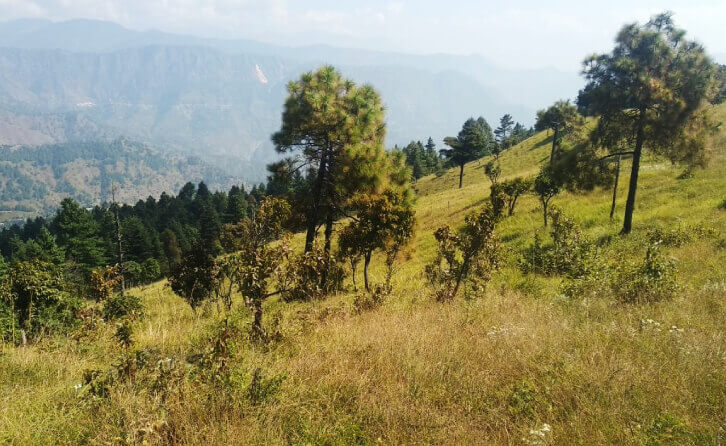 It’s a wonder how Rashi Bugyal Trek has remained hidden from the eyes of curious trekkers so far, considering that it is one of the most beautiful short treks in Uttarakhand you can ever take! A hidden trek in Uttarakhand, it starts from a dense jungle just above Jagtoli Dashjula Kandai (located almost 35 kilometers from Rudraprayag), and ends in the lush and breathtaking Rashi Bugyal. The entire stretch of the trekking trail is about 3 kilometers. As you cross the jungle dotted with Oak trees, the panoramic beauty of the Himalayas unfolds before you. This lovely forest is also inhabited by a rich wildlife including deer, cheetah, bear, wild hen & a wide variety of birds.

Taking this trek lets you observe the local lifestyle, beauty of the rural areas, enjoy complete solitude in the company of nature, and admire the incredible sights all around. For tourists in Delhi, Dehradun and Haridwar, Ranshi Bugyal Trek can be a short weekend adventure destination, where you can also enjoy camping right in the middle of the jungle, thus making it extremely adventurous. 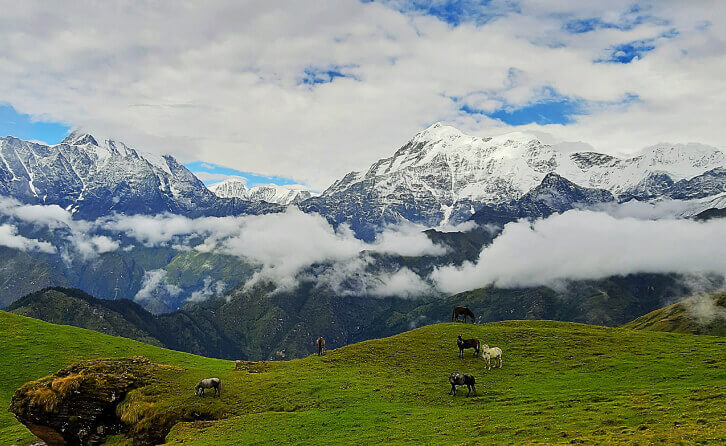 Monal Trek, a Himalayan trek in Uttarakhand in the Wan Village in Chamoli district, Uttarakhand, gets its name from the Himalayan Monal, flocks of which can be seen during the course of the trek. With their multicoloured plumage and metallic green crest, they are one of the most beautiful creations of nature.

During the course of the trek, you are also treated to views of several Garhwal Himalaya mountain peaks like Kedarnath, Chaukhamba, Hathi Parbat and Trishul. You also come across meadows, called bugyals in the local language, which, by their very sight, seem to relax you from within, acting as an energiser to the tired soul.  From the Monal Top, the last point of the trek, views of Pindar Ghati, Ghat Block and Narela Bugyal win your heart. 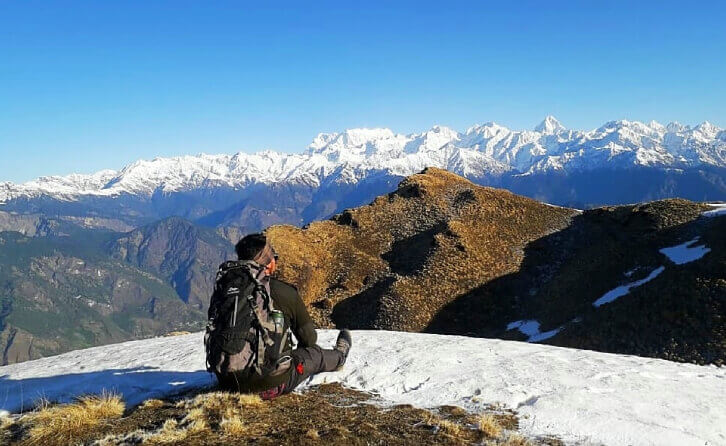 Bandidhura Bugyal is Garhwal Himalayas is the only place from where you can see the peaks of the sacred Panch Kedar, the five Hindu temples dedicated to Lord Shiva along with Panch Badri, the five Hindu temples dedicated to Lord Vishnu. Despite that, Bandidhura Trek is another unknown trek in the Chamoli district of Uttarakhand, even among ardent trekking & hiking enthusiasts, which is quite strange, since taking the trek rewards you with exceptionally amazing views.

This 5 kilometer unexplored trek, which ultimately ends in Bandidhura Bugyal, offers you views of snowdressed peaks like Kedarnath, Chaukhamba, Neelkanth, Camet and Gauri Parbat, besides several other meadows, Himalayan monals, Musk Deer, villages & lakes. You also get a chance to observe the rural lifestyle in the villages that you cross. 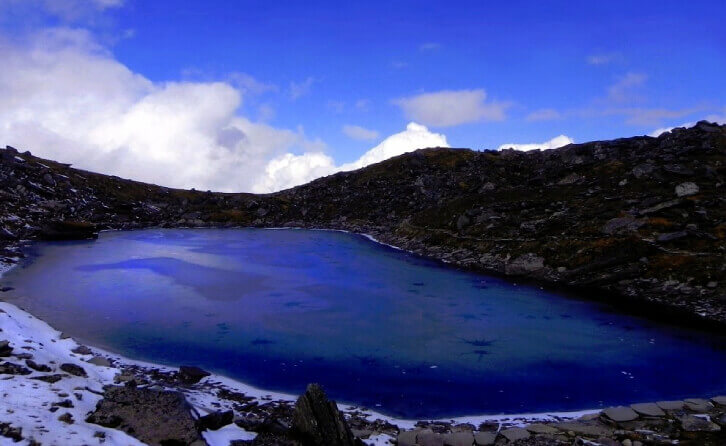 Exploring the unexplored has its own rewards, and the Sapt Kund Trek is a testimony to this. After a gap of about 124 years, a rare species of orchid called Liparis Pygmaea was spotted in the Spat Kund Trek region in the Chamoli district of Uttarakhand. This is also the first time that this flower has been spotted in the Western Himalayas, and naturally, has caught the attention & excited nature lovers. This natural treasure, hidden away from the world, was spotted in a place called Ghansal Udiyar cave, at an altitude of 3,800 meters. Prior to this, the rare flower was spotted in Sikkim in 1892 & 1877, and then in West Bengal in 1896.

That is all the reason you need to take the Sap Kund Trek in Uttarakhand, which is named because there are seven lakes in the region named Parvati, Ganesh, Rishi Narad, Nandi, Bhairav and Shakti. All of these are situated just half a kilometer away from each other. While the waters of all these lakes is extremely cold, one of them has hot water, and taking a bath in it is believed to remove tiredness from your body. Sapt Kund is also believed to be the abode of Lord Shiva. Take this trek to see the rare orchid flower, take in the solitude & tranquillity, enjoy the views of several famous snow capped peaks in Garhwal Himalayas & explore the flora and fauna of this region. 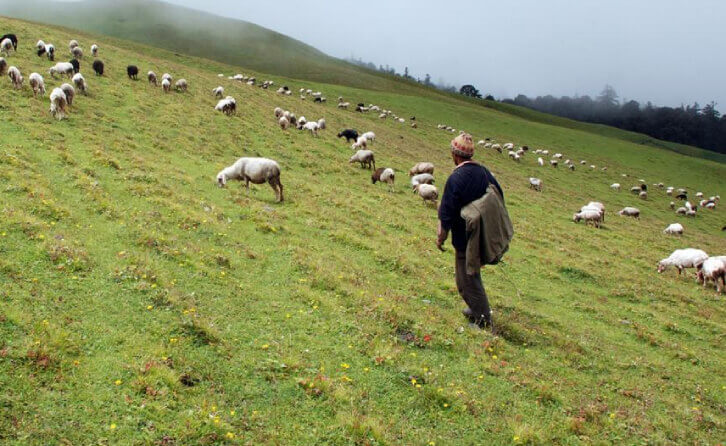 Nagad-Bagji Bugyal Trek gives you an opportunity to explore the valley of the Himalayas. Located in the district of Chamoli between the Pinder and Kel Rivers, the valley is blessed with an exceptional beauty. The trekking route stretches for about 25 kilometers, and cuts through virgin forests, lush meadows, and murmuring brooks, while offering spectacular views of Mt. Nanda Ghunti, Mt. Trishul and Mt. Mrigthuni.

How many of these unexplored treks in Uttarakhand do you want to take? Have you heard of any of these treks, or taken any of them before? If you have, let us know!

Rashi Bugyal Trek is located in Jagtoli Dashjula Kandai, about 35 kilometers from Rudraprayag in Uttarakhand.

Monal Trek is located in the Wan Village in Chamoli district, Uttarakhand, about 275 kilometers from Rishikesh.

Bandihdura Bugyal Trek is located in Kiruli Village in the Chamoli district in Uttarakhand.

Sapt Kund Trek is located around the Irani Village in Chamoli district in Uttarakhand.

Nagad-Bagji Bugyal Trek is located in the district of Chamoli between the Pinder and Kel Rivers in Uttarakhand.

Vishwajit Sharma is a travel writer, and writing is what he does, for that is one of the few things that he can do! He loves reading & world cinema, both of which nourish his soul & are an escape into another world. Born in Darjeeling, he loves the hills & hopes to retire there ultimately!